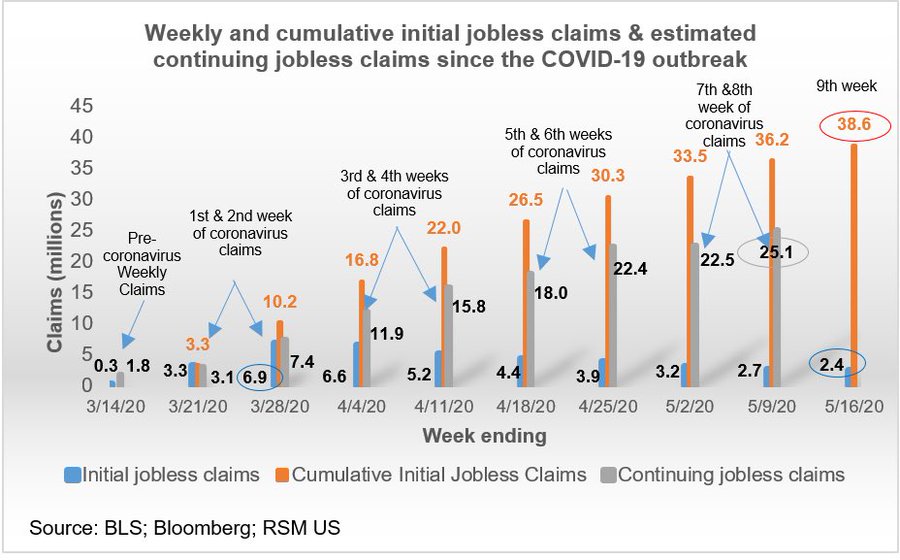 As you can see from the chart above, initial claims fell again. There were 2.438 million which was above estimates for 2.375 million. The problem is the total is adding up to an impossibly bad number. The unemployment rate is going to explode above 20% in May’s labor report. This situation is still disastrous even though many states have partially reopened. The optimistic projection is for initial claims to fall quicker in the next few weeks.

There has been a 38.6 million increase in initial claims in the past 9 weeks. This was a bad report compared to the prior declines. There was only a 249,000 decrease which is much less than the prior week’s decline of 489,000. This time we don’t have a big revision lower to lean on. Because of how many jobs have already been lost, it’s almost a given that initial claims will fall. We need them to fall quicker.

In some states, the unemployment rate is 30% to 40% as you can see in the chart below.

Georgia still leads the pack even though it was one of the first states to reopen. It’s good that Georgia hasn’t seen a spike in new cases, but its labor market isn’t improving quickly which is a bad sign for the rest of the country. That implies the rally in stocks may have gone too far. Utah has done a fantastic job with testing which has allowed it to have the lowest unemployment rate. There is a 29 point gap between the worst state and the best state which is much more than the 10 point gap at the peak of the last recession.

There were 25.073 million continued claims in the week of May 21st. That’s up from 22.548 million. The increase of just 171,000 in the prior week was a mirage. We aren’t yet near the end of this recession. Remember, when continued claims start to fall, it means the recession has ended or is almost over. There was also a 2.2 million increase in claims under the PUA program which is self-employed people. Most were from Massachusetts signaling its backlog was worked through.

Americans On The Move

Despite what the grim jobless claims report indicates, Americans are on the move as the economy reopens. 63% are avoiding small gatherings as of May 17th which is down from 84% on April 12th. 6% are avoiding public places and 76% are avoiding travel by plane, bus, or subway which were both down 13 points. We also have the data in the charts below.  There was an 8 point jump in people visiting restaurants.

On the other hand, there was no change in the number of people going to work. More companies such as Facebook, and Shopify are switching to online work. If companies can avoid having people come in to work, they will. Tech companies are leading the movement. The question is how sustainable this trend is. It’s certainly stronger than the trend of people ordering food for delivery. People are always going to want to gather together to eat. That has occurred throughout human history.

This recession was caused by an exogenous event. We are seeing people use in person services less because of social distancing. Everything that you have learned about recessions in the textbooks must been discarded. As you can see from the chart below, usually investments have about a -4 point impact on GDP, but now we are seeing a 1 point decline. That’s because this recession wasn’t caused by overinvestment.

On the other hand, services had a -5 point impact on GDP which is different from the usual mildly positive impact. That’s because of the decline in human interaction. Manufacturing is usually the most cyclical part of the economy, but now it’s services because of social distancing. Manufacturing is known for bouncing back very quickly. Let’s see if services can do the same in the next few months.

There has been a huge increase in debt offerings in the past few weeks as the credit market has loosened even though the need for debt is still high because demand is low. Some claim the increase in debt is a consequence of Fed policy. It is but, you could argue its a positive. The mandated shutdowns are causing the need for debt. The Fed’s policy is simply allowing it to occur. The other option would be a massive wave of bankruptcies which would make it harder for the economy to recover. This isn’t necessarily a moral hazard in the short-term because companies didn’t cause this recession. It was an exogenous event. However, if these policies persist indefinitely it opens up a lot of moral hazard for the future.

As you can see from the chart below, Moody’s has estimated the default rate of consumer related industries.

It’s no surprise beverage, food, and tobacco are low because those are needs and people are addicted to smoking. The hotel, gaming, and leisure segment is expected to have about a 17% default rate in the next year. Don’t think Fed policy is preventing anything from bad happening. It’s just saving us from the worst case scenario which is a depression.

Jobless claims are simply too high. They have been falling for 7 weeks, but they didn’t fall enough this past week. The unemployment rate is well over 20%. The good news is people are starting to go out more. This is a different recession as services have led the collapse in economic activity. The Fed calmed financial markets which allowed for a lot of new debt to be offered. The best places to avoid defaults are in necessities like food and beverage, while the worst places are travel related like hotels.