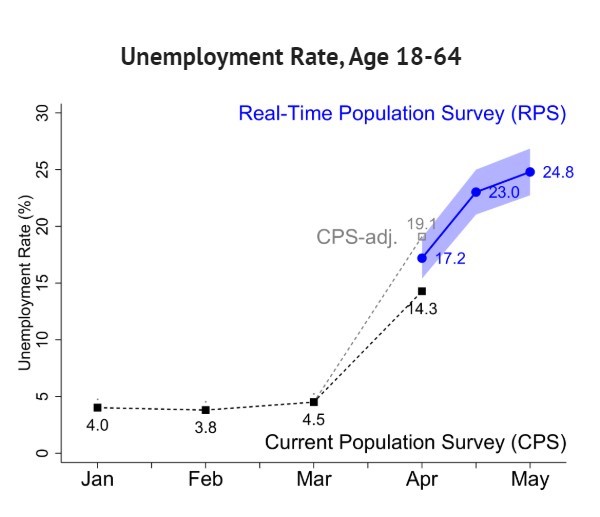 There have been 38.6 million new jobless claims in this recession. There was a big spike higher followed by a steep drop off which has been moderating like a bell curve. You can see the past initial claims readings in the chart below. The last reading drives home the point we made in an earlier article which is that it didn’t fall enough. Initial claims only fell 249,000. If they fall 249,000 per week in the next 4 weeks, we will be left with 1.442 million claims per week which would be the highest ever outside of this recession.

What makes matters worse is claims are likely to fall by less each week as the model estimates. This decline curve implies there will be about 12 million more claims by August. Of course, reality won’t be as clean as this indicates. It depends on how quickly people are rehired after states allow firms to reopen. There’s a huge push to allow businesses to reopen, but that’s not a panacea. The other aspect is the backlog of claims that have already been filed. When that is eliminated, claims will fall. If it wasn’t for the backlog, the peak in April would have been higher and the decline would have been steeper.

The Federal Reserve Bank of Dallas has done a population survey to give us real time data on the economy since there have been so many changes since the last labor report. The employment rate for people ages 18 to 64 is estimated to be 52.1% which is down from 72.7% in early March. 20.6% less 18-64 year old workers are employed because of this devastating recession. That’s the lowest rate since the 1962. At least it didn’t fall a statistically significant amount in the past 2 weeks. The BLS estimates that over 7 million people who are unemployed were mistakenly called employed/absent from work in the April report. Let’s see how the April data is revised when the May report comes out.

As you can see from the chart above, the unemployment rate for this age group rose from 23% to 24.8% in the week of May 10th to the 16th. As you can see, the April current population survey was adjusted. This is the highest unemployment rate since 1962. Hours worked fell from 19.5 to 18.7 in this recent report and from 26.7 before this recession. 42.6% of people earned less than they did in February with 2/3rds of that decline being caused by fewer people employed and 1/3rd being caused by those who are still employed making less money. Just 10.4% of people are earning more money than in February.

Over 55% of people think they would be able to return to work if the economy and schools reopened. Compared to 2 weeks ago, uncertainty increased by about 8% to about 23%. Those who think they won’t be able to go back fell about 10% to about 19% which is a good sign. Finally, about 10% of the people who are unemployed still plan to apply for benefits. Besides the backlog of claims being worked on, there are also people who haven’t filed yet even though they may have lost their job weeks ago.

The term permanent job losses has been discussed too willingly. This recession isn’t permanent just like all the prior recessions. Even depressions aren’t permanent. This spike in unemployment will end just like in prior cycles. Only older people might lose their jobs forever because they might retire. Plus, there might be some jobs that don’t come back because of technology. That always happens; change is being accelerated by this recession. For example, the retail jobs at the places that have gone bankrupt won’t come back.

While the unemployment rate will fall back near where it was last year, the decline in the labor force participation rate will be long lasting. That’s because demographics put it in a long term downtrend. As you can see from the chart below, in the last few years of the expansion, the rate defied gravity by rising despite the aging population as boomers were retiring. The labor force was tight enough to keep it from falling. It’s likely that when the recovery starts, this rate will rise, but it won’t get back to the peak before this recession because the population continues to age. One other aspect to keep in mind is that the early stages of this recovery will be worse than the peaks of most recessions because of how bad this recession has gotten.

Raymond James makes the case that just like in 2009, the beginning of this post trough rally has been about multiple expansion, but EPS estimate increases will need to do the heavy lifting now to get the market higher. This analysis fails to point out that while both initial rallies increased forward PE multiples by about 60%, the current multiple is way higher than it was last cycle. The multiple bottomed at about 9 in the last recession, while it bottomed at above 13 in this one. The current PE is almost 22, while it was about 14 a few months after the March 2009 bottom.

The multiple is so high because tech and healthcare are a large portion of the market. While we have defended the big tech firms as having (mostly) strong moats in the past, there’s a point where even the best companies have rallied too much. There’s a scary narrative in financial circles that states you should pay up for growth stocks because strong companies deserve almost any valuation they get. Paying up for quality isn’t bad advice, but in the context of this extreme tech rally, it can be a big problem.

As you can from the chart below, the 14 month RSI of the Russell 2000 growth to value index is in the mid-80s. Whenever it has gotten this high in the past 42 years, it has signaled a correction was coming. The crazy thing is energy has actually been the best sector since the bottom. On the other hand, the potential good news is forward EPS estimates may have bottomed. That bottom is predicated on there not being a 2nd wave of COVID-19.

This past jobless claims report wasn’t good. There has been a massive spike in the unemployment rate for people 18-64, but in the past 2 weeks the increase wasn’t statistically significant. The May BLS report will be terrible; we will be watching the April revisions which could be large. The labor force participation rate won’t rise to the previous peak in the next cycle unless there’s a huge inflow of young immigrants. We’ve seen a spike in valuations like the rally in 2009, but the key difference here is multiples are much higher because of growth stocks. Growth stocks are at an extreme versus value. The good news is forward EPS estimates may have bottomed.