Is US Housing In A Bubble, Again? 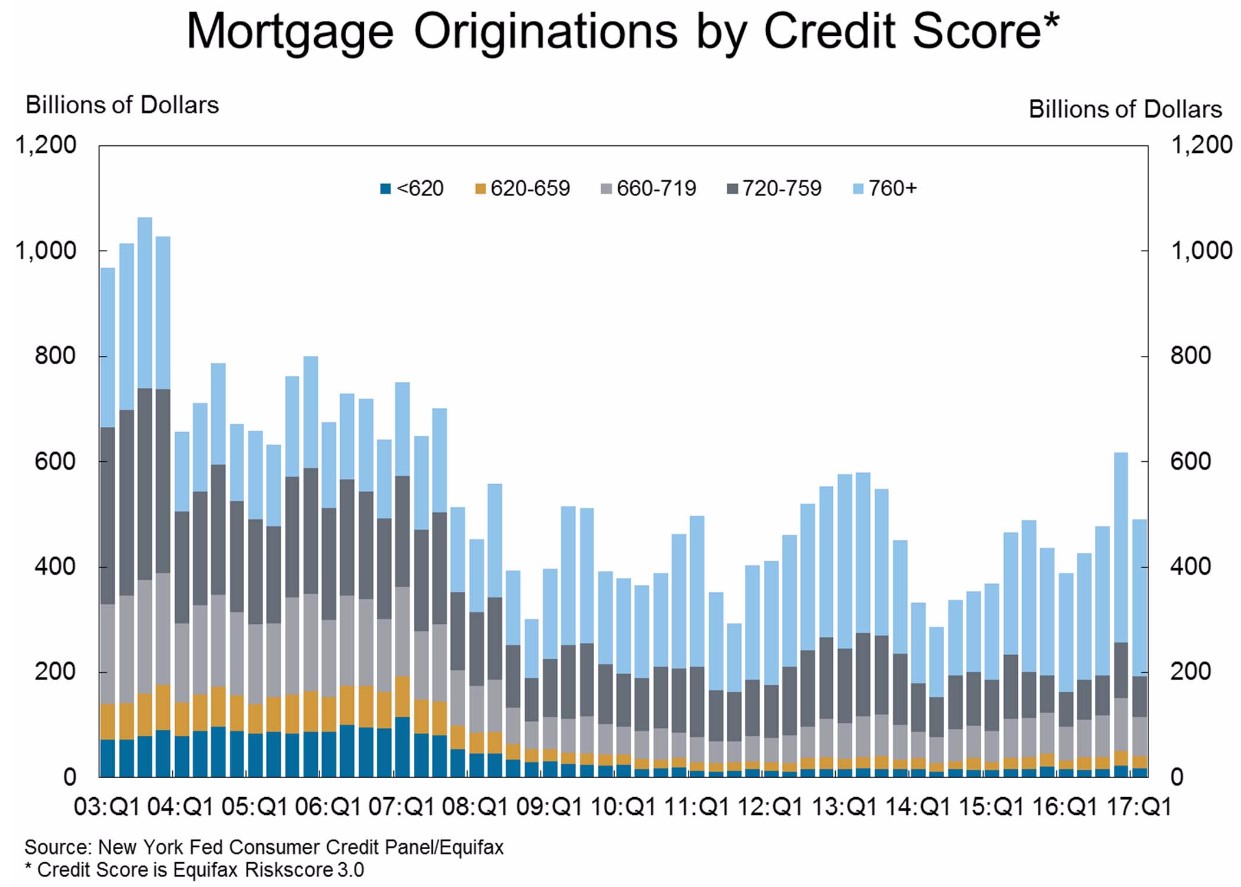 There is a lot of chatter about bubbles in the economy as recency bias takes hold. Recency bias is when investors think recent market action will repeat. In other words, extrapolating recent events indefinitely, and disregarding the importance of history. An example would be if a company beat estimated analyst earnings 6x in a row, but had a 10-year average of only beating results 50% of the time. Recency bias would indicate that because the company beat earnings estimates recently, that this is a more important indicator than what the company has done throughout its history. The same thinking is what led many investors to call for the next market crash within the first few years after the bull market started in 2009. It’s worthy of pointing out the fact that the Fed has artificially boosted stock prices through quantitative easing and low interest rates. However, saying stocks were going to crash proved to be a mistake as the 2009 to 2017 period was one of the longest and strongest bull markets in history. Bull markets are built on fear and bear markets are built on complacency. Markets move in cycles. Expecting recent events to occur indefinitely, whether rallies or declines, is unrealistic.

Besides having recency bias, there also tends to be a lack of research into asset prices. Investors call everything a bubble that has moved higher. The psychology behind this is confirmation bias, with the thinking being that an asset you don’t own is in a bubble if it goes up a lot, but its merely in a bull market if you do own the asset. There are bubbles in the current environment, but calling every asset that has increased in price a bubble is incorrect. The most successful firms witness increases in stock values because profits increase – that is the linchpin to fundamental analysis. There’s always a reason for assets to move the way they do. You must spot a reason why an asset is in a bubble before giving it that name. Websites that rely on advertising revenue and traffic won’t stop doing click bait articles, but you don’t have to give in to the fear they are selling.

The asset which fits the bill as one that has gone up in value, but isn’t a bubble is American housing. As you can see from the chart below, housing prices have exceeded the prior peak in February 2007.

Many websites can show this chart and say this is a bubble because the price is up again. That would be playing off your recency bias as investors are afraid of the 2008 crash happening again. Interestingly, the managing director and chairman of the index committee at S&P Dow Jones Indices, David M. Blitzer seems to be suffering from this bias. It’s surprising because you’d think someone covering housing prices wouldn’t be so negative when prices are showing such healthy increases.

In April, the Case Shiller housing price index went up 5.5%. David Blitzer said “the question is not if home prices can climb without any limit; they can’t. Rather, will home price gains gently slow or will they crash and take the economy down with them? For the moment, conditions appear favorable for avoiding a crash.” This statement is a far cry from what we were hearing in 2004. In the lead up to the housing bubble burst, analysts were telling people housing prices could never fall given that we were in a “new economy”. This current lack of excitement from economists and investors is evidence this isn’t the housing bubble part two.

The first piece of evidence I have that this isn’t another housing bubble is the homeownership rate. The housing bubble started because of legislation signed in the 1990s by President Clinton which had the goal of getting more people to own a home because it was the ‘American dream.’ That’s a silly dream if you plan to buy a house you can’t afford. In fact, it turned into a nightmare as many buyers defaulted on the loans. As you can see, this plan failed as the homeownership rate is below where it started. Housing is not in a bubble as the people who can’t afford a home no longer own one.

Homeownership Rate Is Lower Than Before The Bubble

The second piece of evidence that the housing market isn’t in a bubble is the total mortgage debt is lower than the peak. Following the 2008 crisis there was a significant deleveraging process, with mortgage debt only starting to rise again in 2013. Housing debt peaked at $9.99 trillion in Q3 2008. As of Q1 2017, it was $9.08 trillion. This is remarkably low when you consider how low interest rates should entice buyers. People learned their lesson about taking out mortgages they couldn’t afford and many banks tightened standards (while some continue to make the same mistakes of the past). This lesson hasn’t been translated to other areas as the auto loan and student loan growth seems to show that people continue to take out too much debt; they just aren’t doing it in housing. 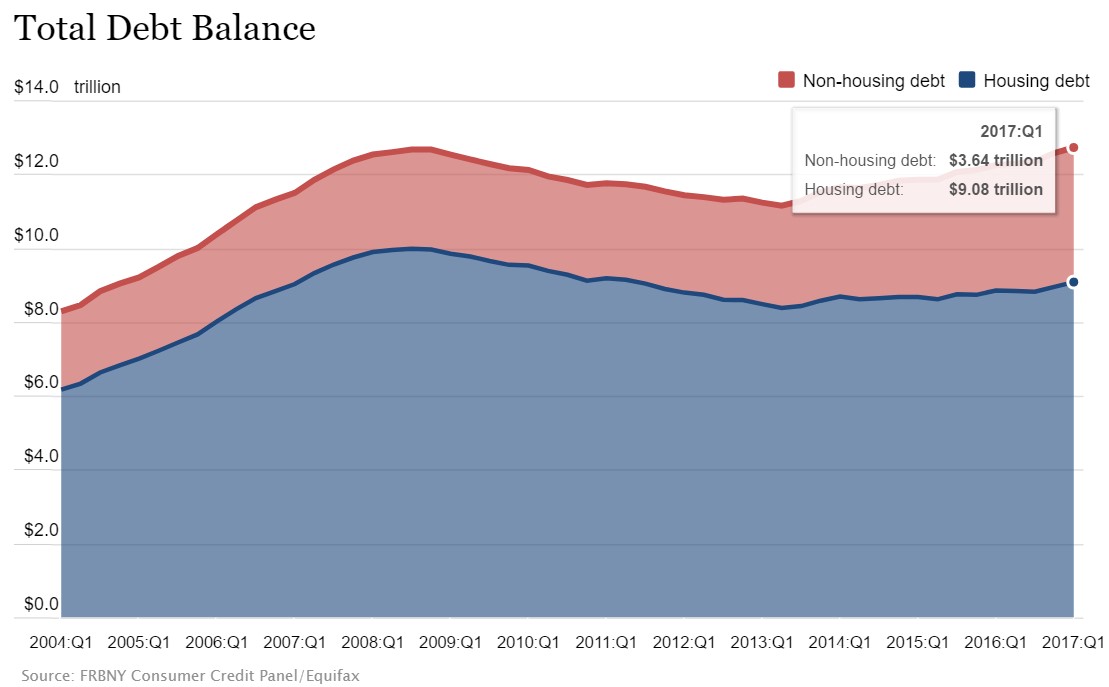 Housing Debt Is Lower Than 2008

The most compelling case for why there is no bubble in housing is because there aren’t as many loans given out to unqualified buyers. The definition of a bubble is when artificial demand pushes up prices. As you can see in the chart below, in the 2003-2007 period, there were tens of billions of dollars of mortgages given to borrowers with below a 620 credit score. According to Equifax stats from 2010, only 20% of borrowers had below a 619 score. That shows how banks were willing to give a loan to anyone with a pulse before the 2008 crash. Now a higher percentage of loans are given to borrowers with a 760 or higher credit score and almost no loans are given to borrowers with below a 620 score.

Loans Are Now Only Given To Well-Qualified Buyers

The final point is that HELOC balances and limits are down. A HELOC is a home equity line of credit. Home equity lines of credit are when home owners borrow against the equity they have in their house to fund major expenses like home renovations or college. Less credit is being offered and less borrowing is being done. This is good news because too many people thought they were richer than they actually were in 2000-2007 because they thought their house price would increase forever. Borrowing against an asset which is artificially inflated is a disaster waiting to happen. Now there’s less borrowing and house prices aren’t as artificially inflated as leading up to the 2008 crisis. 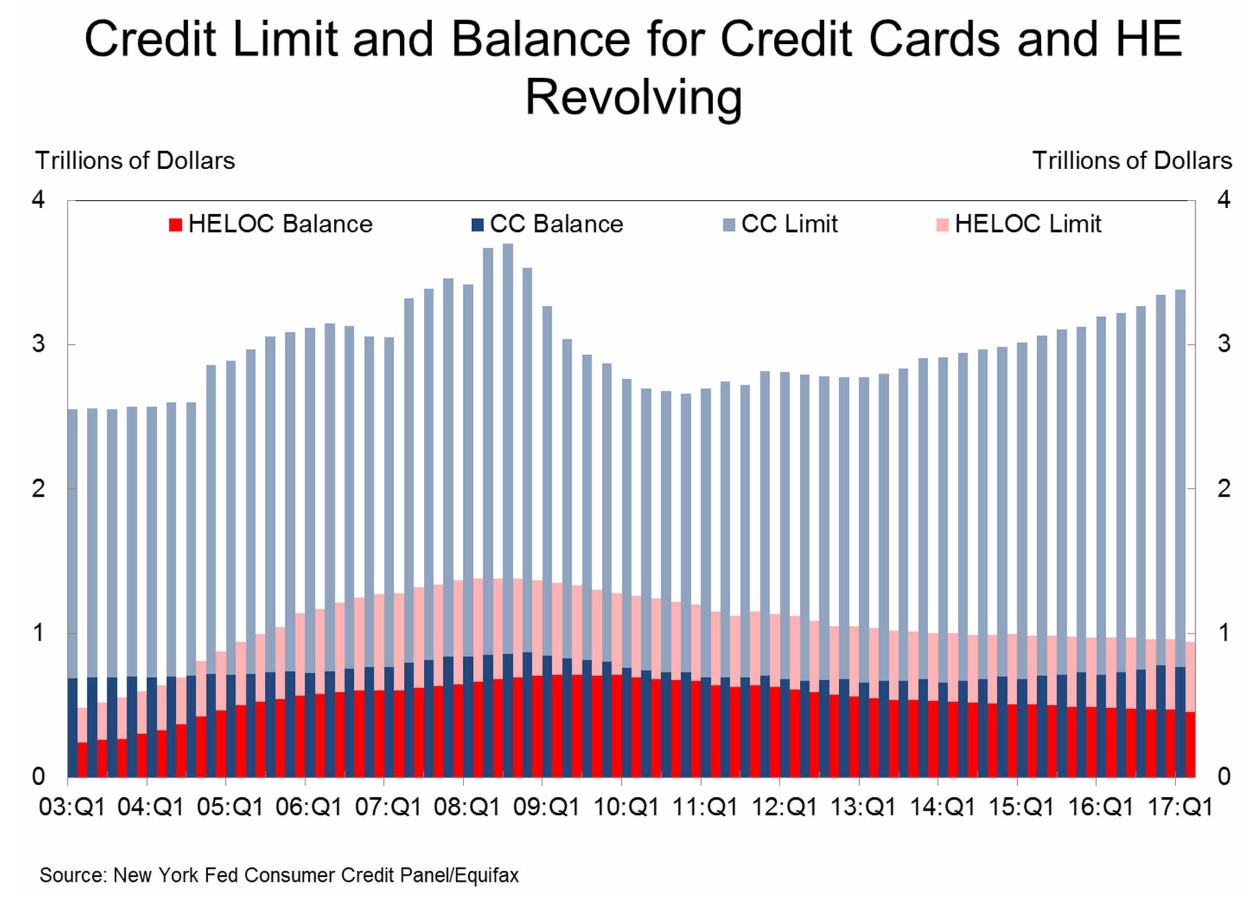 Housing prices may be in a bubble in Canada and Australia, but in America there is no bubble, despite housing prices having increased due to artificial stimulus from Federal Reserve monetary policy. That’s not to say prices can’t decrease in the next recession, especially given the fact that the United States has an aging demographic, which in itself suggests weaker demand for housing. However, expecting a severe change in house prices in a short period of time, like we saw in 2008, is counter productive. Moving forward, without continued monetary stimulus from the Federal Reserve, the likely trend may be prolonged weakness in housing prices, something which Japan has witnessed for decades. This article is not advice on whether you should buy a house because each area has different fundamentals. Some cities, such as Silicon Valley, might have extremely overvalued markets. The key is to not have a mindset of irrational fear. The same mistakes that led to the 2008 crisis in large part have not been repeated in housing. However, student and auto loans is an area that suggests a very similar correlation to the problems that lead to the 2008 housing crisis.