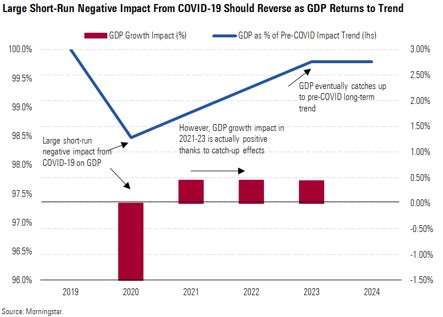 With the S&P 500 down just under 27% from the peak in February. We are at a moment of extreme pessimism. This was the fastest bear market ever. The pessimism isn’t just based on stock prices though. We’ve seen the President ban travel from Europe for 30 days, the NBA and NHL canceled the rest of the season, and healthcare systems in Iran and Italy get overwhelmed. It’s a lot tougher to invest in markets when people are getting sick around you. This isn’t a situation where you can scoff at the fear in markets. The fear is justified.

Extreme pessimism is here, although, that doesn’t mean stocks can’t go lower if more negative news comes out. The CNN fear and greed index is at 4/100 which is extreme fear. In the week of March 11th, the AAII investor sentiment survey showed the percentage of bulls fell 9 points to 29.7% which is below the average of 38%. The percentage of bears is more valuable historically. It shows more of a problem (which can be a positive for contrarians) as the percentage of bears rose 11.7% to 51.3% which is much above the historical average of 30.5%. That’s because the percentage of neutral investors is 12.5% below average. People are either buying the dip or panicking. There is little in between. Sometimes the best thing is to do nothing in the face of wild action.

As you can see from the chart above, the Bloomberg fear greed indicator is actually below where it was in 2008. That’s amazing because stocks were at record highs just a month ago. 1971 was the last time the 10 year yield had a 14 day RSI as low as the recent trough. It just recently ended its 13 day decline streak which was a record high. Wednesday was a disaster for those hiding out in the long bond because the TLT + the S&P 500 had its worst day since December 2002 when the TLT was formulated. On the 6th, the TLT had its best day ever and on the 10th, it had its worst day ever.

Unprecedented Levels Are Being Hit

The VIX closed above 40 for the 4th straight day for the first time since March to April 2009. The was a 40% increase in the put to call ratio to 1.02 which signals extreme pessimism. There have been 7 days (8 including Thursday) where the S&P 500 has fallen 3% or more this year which is the most since 2009 which had 12. We are on pace to beat the peak of 23 in 2008. The implied correlation in the S&P 500 hit above 65% as all risk assets traded in kind regardless of the fundamentals. That makes it a potentially great time to be a stock picker with a long term time horizon. Furthermore, the 21 day rolling correlation of large caps has only been exceeded by August 2011, the great financial crisis of 2008, and the 1987 crash.

Credit default swaps on investment grade debt nearly hit the peaks in 2011 and 2016. We’ll be watching those closely this week. Moody’s sees global default rates rising to 3.6%. The high yield default rate could rise to 9.7% in the worst case scenario. Blackstone Group encouraged firms impacted by COVID-19 to use their credit lines possibly before they can’t. That’s the scariest news of the week. Recessions happen when companies can’t get funding, or when business stops. With the virus, there could be both.

Small Caps Are Getting Destroyed

Small caps are getting hit very hard in this selloff. The Russell 2000 ETF closed at the same price it closed at on Christmas Eve 2018 which was the bottom in stocks then. Furthermore, the ratio of small caps to large caps is the lowest since October 2002 (IWM vs SPY). Because COVID-19 is becoming a bigger risk to America than China, being domestically focused is now a bad thing. Credit conditions tightening hurts small firms the most. That’s because these firms are highly indebted and many don’t make money. Specifically, 23% of firms in the S&P 600 aren’t profitable. As you can see from the chart below, since 2012 the debt to equity ratio of the S&P 600 has skyrocketed. It’s near 130%.

This bear market will provide great opportunities to investors with long-term time horizons because COVID-19 won’t do significant damage to the global economy in the long term according to Morningstar. They have a bull, bear, and base case which imply 2020 GDP growth will be hurt by 0.1%, 5%, and 1.25%. Their probabilities are 25%, 15%, and 60%. Morningstar expects US GDP growth to be hurt by 1.5% in 2020 (base case). UBS expects Q2 GDP growth to be -0.8% and Credit Suisse expects it to be -0.9%; both are obviously recessionary. The collapse in energy prices will hurt industrial production, but help the consumer. Morningstar lowered their 2020 China GDP growth rate expectation from 4.7% to just 2.2%.

This bear market has reached extreme pessimism according to most metrics. We are still at the beginning phases of the outbreak in America. The hope is these latest actions to curtail the spread work. That combined with a fiscal stimulus will send stocks soaring. The extreme fear in markets is leading to a recession being priced in. Like the 2008 financial crisis, central banks and governments can reduce the financial impact on individuals and businesses, but until the virus stops spreading, the economy will be in serious risk of severe dislocations. Additionally, human behavior is not linear. Once the virus stops spreading (it will stop, we just don’t know when) it doesn’t mean economic activity will resume like nothing happened. With the right time horizon long term investors can benefit from the panic in markets, but that doesn’t mean this is the bottom.