What Stocks Are Pricing In 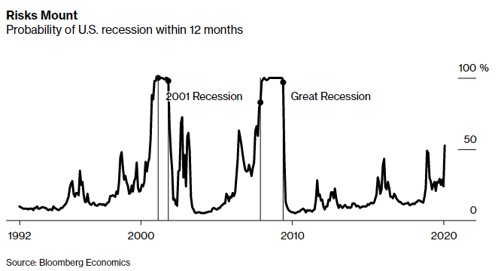 Morningstar recently put out research suggesting the stock market has way overreacted to the impact of COVID-19. However, it’s reflective of human emotions. Even if the virus isn’t devastating, it will have negative impacts on the economy because of the events and vacations that are being canceled, business closures, and the changing of behaviors that may not rebound immediately after the threat of the virus subsides.

As you can see from the chart below, we have an update on domestic movie box office receipts. They are down 40% from the 3 year average through March 8th. This isn’t to say that this isn’t a buying opportunity for long term investors. We’re just saying it’s very clear why stocks are falling.

There is a lot of uncertainty about how bad the virus will get and what people and governments’ responses will be. That doesn’t even get into the point that stocks were expensive before the correction. We think it’s fair to have two separate opinions on stocks. The opinions are where stocks could go and where they are buys for long term investors. You can argue that stocks are overreacting to this, but stocks usually overreact to news and always decline when there is high uncertainty.

The good news is small business confidence actually increased in February. You read that correctly. The small businesses that governments and investors are so worried about where very confident last month. The reading was in the top 10 percent of data going back 46 years. We don’t know when the sample period was within February, but it’s safe to say confidence has likely waned since the survey. The net percentage of small firms expecting the economy to improve rose 8 points to 22%. Those expecting improved credit conditions rose 3 points to -1%. Given the big decline in the Bloomberg financial conditions index, it’s clear that reading will decline in the March report. In this report, the NFIB stated in the comment section, “in February, the regular course of commerce continued on main street with the exception of a few “hot spots” where the spread of the coronavirus caused elevated disruptions.” This further supports our point that the economy was strong before COVID-19 hit.

Fiscal stimulus is coming. President Trump has discussed giving out loans to travel companies like the airlines, hotel operators, and cruise ship firms. The latter is a dubious proposition considering that those firms don’t pay US corporate taxes. Furthermore, Trump is also considering helping shale drillers which the Democrats will surely disagree with as many are against fracking. Helping frackers has more to do with OPEC+ not cutting production than COVID-19, although, the virus is responsible for the latest weakness in demand especially from China. If the small E&P firms go bankrupt, it would consolidate the industry rather than completely ending fracking. The decline in oil prices will hurt mining production in the industrial production report similar to 2015 and 2016. The good news is the manufacturing sector was recovering before this. The bad news is it might not fully recover with the new negative catalyst that is COVID-19.

As we mentioned in a previous article, the White House also wants to cut the payroll tax. In 2011 and 2012, the Obama administration cut the payroll tax by 2% (from 6.2% to 4.2%). That gives us an idea of what its economic impact would be. As you can see from the chart above, 150 basis points of rate cuts and a 2% payroll tax cut holiday would help growth by 0.8% which is 0.6% below the negative impact of COVID-19 if it gets really bad. The good news is Trump wants a 0% payroll tax for the rest of the year (over 3 times the size of Obama’s cut). The market will be reacting wildly to the potential plans. The government reacts slowly and the Democrats won’t exactly be excited to help Trump ahead of his election bid in November. To be clear, they will want to help people, but their plans will differ from his. The majority of the impact may have already been felt by the time the help comes. However, stocks will price in the plans once they are better formulated. In that sense, this is open mouth policy (forward guidance) that helps stocks which is a stimulus in itself.

There might be a global recession coming. There is probably a better chance of a global recession than an American one because we already have seen the terrible data from China in February. It’s very likely the March data from Italy, Iran, and South Korea will be terrible. It’s unknown how quickly COVID-19 will spread in America. As you can see from the chart below, Bank of America lowered its 2020 global growth forecast from 2.8% to 2.2%. It lowered its China forecast from 5.2% to 4.6%.

In a recessionary scenario, global growth would fall to 1.4%. There still might be a recession even if growth is a bit higher. Growth doesn’t need to hit a specific target for there to be a recession.

As the table above shows, U.S. growth will fall to 1.2% in 2020 if Bank of America is correct about the recessionary scenario. In the worst case scenario, it could even fall to 0.5%. As you can see from the chart below, the Bloomberg Economics 1 year recessionary odds forecast shows there is a 55% chance of a recession which is the highest of the expansion. If recession odds are higher, theoretically stocks should fall more than they did in Q4 2018 (slightly less than 20%) especially since valuations started higher.

The stock market is near its trough if there isn’t a recession. The average decline in bear markets outside of recession is only 24%.

Movie sales are cratering, but small business optimism is high. The government is planning a fiscal stimulus which is great for stocks, but might actually help the economy after the worst of the impact is over. It depends how long the impact of COVID-19 is and how quickly the stimulus is passed. We aren’t experts on viruses, but we know the government drags its feet on policy. There is risk of a global recession. It’s uncertain if that will translate into a US recession. If there is a recession, there’s likely more downside to come.