Is The U.S. Economy Still In A Slowdown? 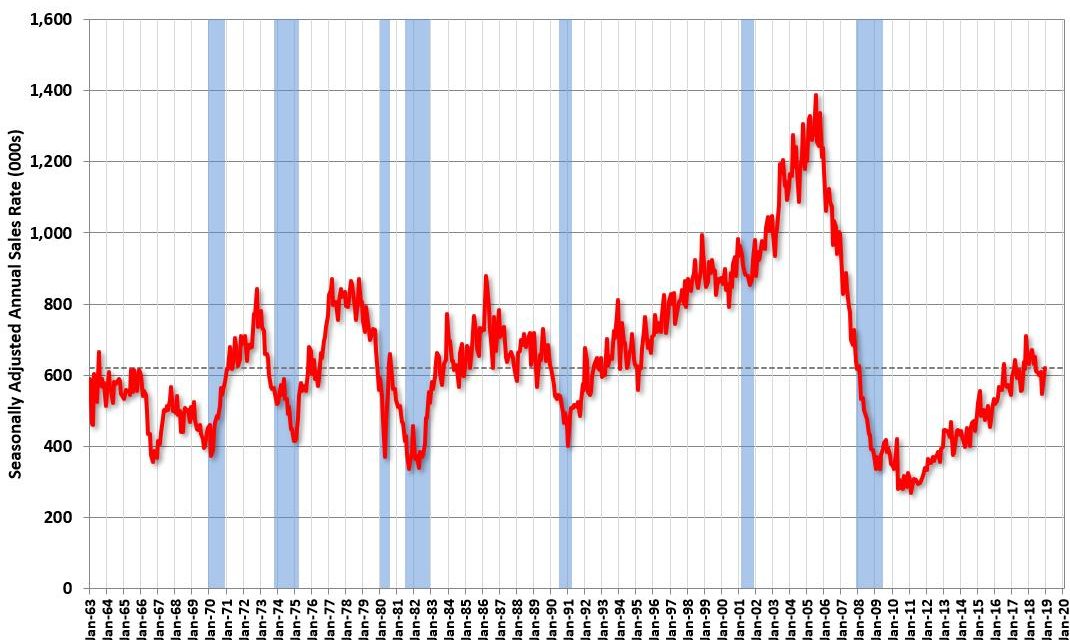 Considering how weak the December housing market was, it’s nice to see new home sales of 621,000 which beat estimates for 590,000 and November’s reading of 599,000. November’s new home sales were sharply revised lower from 657,000. As the chart below shows, the uptrend in new home sales was broken in 2018.

Year over year new home sales in December were still negative even with the monthly improvement as they fell 2.4%. The current sales rate is much lower than previous cycles even though the population is higher. Sales won’t get back to last cycle’s peak anytime soon, but they should continue to recover in 2019 if the labor market is solid.

As you can see in the chart below, the monthly improvement still meant yearly growth was -7.1%.

Consumers couldn’t bare the increase in mortgage rates. That shows us that even though the housing market isn’t in a bubble because mortgages are being given to well qualified buyers, there would be a big decline in housing prices if interest rates increased. Rising rates wouldn’t lead to a massive spike in defaults and tank the economy because housing is a smaller part of the economy than in the 2000s.

Just as Zillow predicted, CoreLogic reported home price growth was 4.4% in January. That was the weakest gain since August 2012. The combination of accelerated real wage growth, especially for people in the low income group, lower home price growth, and declining mortgage rates should make this a solid year home buying. The chief economist for CoreLogic agrees as he stated, “Fixed-rate mortgage rates have dropped 0.6 percentage points since November 2018 and today are lower than they were a year ago. With interest rates at this level, we expect a solid homebuying season this spring.”

As you can see from the chart below, there were 344,000 new homes for sale at the end of December. That was a 3% monthly increase.

The monthly supply fell slightly to 6.6 months from 6.7 months. The 10,000 increase in supply from November was the largest increase in 65 months.

An increase in supply would be a problem for prices normally. However, the situation isn’t as dire as it seems because “new homes for sale, but not yet started” exploded in December as you can see from the chart below.

Is America Even In A Slowdown?

As you can see from the chart on the bottom right, services outperformed manufacturing by one of the largest amounts in the past 18 years.

The relative divergence doesn’t signal much for the economy. The most important aspect is services dominates the economy, so wherever it goes, the economy goes. It makes sense that manufacturing is weaker than services because the global economy is weakening and manufacturing is more affected by it.

This ISM reading was so strong it makes you wonder if the economy is even in a slowdown. The answer is simple. If the hard data reports match this reading, the economy isn’t in a slowdown. However, one report doesn’t mean anything as it has a small sample size. The PMI is consistent with GDP growth of 3.9%. That’s way above the 1% median expected Q1 growth rate according to 7 firms surveyed by CNBC.

As you can see from the chart below, the new orders index increased 7 points to 65.2 which was the highest reading since 2005.

The highest level since 1997 is only 1.7 points higher than the February reading. Business activity was up 5 points to 64.7. Just like the manufacturing report, the prices index fell. It was down 5 points to 54.4. New orders rising and inflation falling is the ideal scenario. This could be a Goldilocks economy if the hard data supports this survey.

In the quotes taken from firms surveyed in the non-manufacturing ISM report, there were more mentions of tariffs than in the manufacturing one. A retail trade firm stated, “Confidence is returning in the marketplace, but tariff surcharges are still in place.” That means the PMI would be even better without the trade war. There has supposedly been recent progress in the trade war with China offering to lower tariffs on U.S. farm, chemical, auto, and other products as part of the trade deal that’s being worked on.

The housing market looks like it will rebound in the spring which would be great for GDP growth as there are many housing projects in the pipeline to be started. The main variable in play is the labor market. If it stays where it is now, there should be a pickup in housing considering the low price growth and mortgage rates. The non-manufacturing PMI was great. It’s similar to the Markit report which also showed services outperforming manufacturing. If the ISM report is accurate, earnings estimates are too low and the stock market rally in 2019 is justified.