Is The Economy Back To Recovering Quickly? 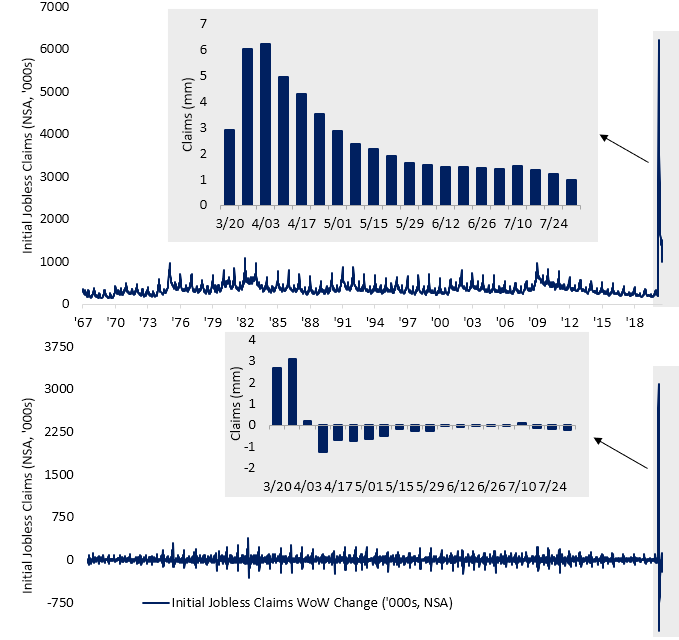 In the week of August 1st, seasonally adjusted jobless claims fell from 1.435 million to 1.186 million which was way below the consensus of 1.442 million. It was even below the lowest estimate which was 1.38 million. This is impressive because the seasonal adjustment pushed it higher just like last week which was partially why seasonally adjusted claims rose in that report. As you can see from the chart below, non-seasonally adjusted initial claims finally fell below 1 million. They declined from 1.2 million to 980,000. This was the biggest weekly decline since May 30th. It gets harder each week for claims to fall because there is less room for them to fall. For context, if claims were to fall this much every week, they’d be back to normal in 3 weeks. This decline was so strong it’s unsustainable.

Many critics have been saying that if the extra benefits were ended, like they temporarily were on July 25th, that people would suddenly be motivated to go back to work. The problem with that logic is people have been going back to work even with the extra benefits. If more jobs were available, almost everyone would be back to work. There is no logic to wanting to stay home from work to collect benefits because benefits are very unsteady. They were tough to collect in March and they keep getting caught up in political debates. You know consumers don’t believe the benefits will always be there because their savings rate is very high. They are uncertain.

We’re sure somewhere people are arguing that people went back to work because of the decline in benefits. However, we think the labor market improved because COVID-19 cases have been falling. As you can see from the chart below, the population weighted share of states with an increasing level of new cases compared to 2 weeks ago is lower than the trough in late May/early June. Keep in mind, that cases are falling quicker than they did in the first wave because they have more room to fall. There has also been a smaller decline in testing. Deaths per day are finally starting to fall.

This report was a complete win because PUA claims fell from 830,000 to 656,000. They have been stubbornly high through this pandemic. Continued claims also fell as they were down from 17 million to 16.1 million. They are slightly below where they were 2 weeks prior. Since continued claims are delayed a week, you can argue this great initial claims reading implies continued claims will fall in next week’s report. We are well on our way to a strong August BLS report. The economic slowdown might be over as the decline in cases and stimulus provide the economy with much needed momentum.

If you live in America, you’re obviously used to criticism. You are rarely going to see a news story about how good the country is doing. You can argue positive stories aren’t important when you consider how many areas it can improve on. Either way, it’s notable that America’s fiscal stimulus catalyzed the only positive growth rate in disposable income in Q2 among major developed economies. That may have helped America’s GDP growth be among the strongest (or the least bad).

The US might not outperform in Q3 because it dealt with a more severe 2nd wave. It’s extremely unusual for disposable income growth to be strong in a recession. If the economy successfully rebounds in the next year, this policy might be a good model for future recessions. It takes years for the poor and lower middle class to recover from recessions. It’s easier to prevent hardships than to help them after one has occurred.

The spike in income growth created confusing scenarios within the recession. We have seen extreme speculation in the stock market by retail investors like you normally see late in the cycle. There has been a burst in used car buying, RV buying, and boat buying. The housing market is also extremely strong. As an aside, the average 30 year fixed mortgage rate fell to 2.88% this week which was a record low.

Credit card debt fell from $890 billion to $820 billion because of the government help and because people are uncertain about the future. As you can see from the chart above, auto loan debt in delinquency fell from 5.1% to 5%. We always wondered how bad it would get in a recession. Apparently, it got better. Student loan delinquencies fell from 10.8% to 7% which is the lowest rate since Q1 2007. That is related to the deferral/forbearance of loan payments. The biggest problem area was credit cards which saw their delinquencies rise from 9.1% to 9.8% which is the highest rate since Q2 2013.

Near bubble peaks you see extreme data that is so out of the norm it shocks you. This meshes with euphoric sentiment in which there is extreme disdain for anyone who takes profits. The NAAIM investor exposure index has been above 90 for 4 straight weeks which is the longest streak since December 2017 to January 2018 which was right before the short VIX trade exploded. Investors have been trained to buy the dip and ignore valuations. That eventually comes to a halt after the bubble hits a mania stage. The reality is before this year, the FAAMNG stocks mostly weren’t extremely expensive. The bulls have gotten so used to ignoring extreme negative calls against their stocks, they forgot how to reason. Just because the bears were wrong 5 years ago, doesn’t mean they are wrong now. The bears now have the facts on their side. The chart below is an example of a shocking data point. As you can see, the 6 FAAMNG stocks have a higher combined market cap than the combination of the materials, energy, financials, and industrials sectors. Apple is almost as valuable as the entire Russell 2000 as it has a $1.95 trillion market cap.

The jobless claims report was very good as non-seasonally adjusted claims fell below 1 million for the first time since the pandemic started. The decline in cases might help the economic recovery get back on track in August. Disposable income growth was positive in Q2 which helps explain why credit card debt fell in the recession. The student loan delinquency rate fell sharply. The FAAMNG stocks are more valuable than 4 sectors. Apple is larger than the entire GDP of Italy.