Is The Bottom In S&P 500 Earnings Estimates Near? 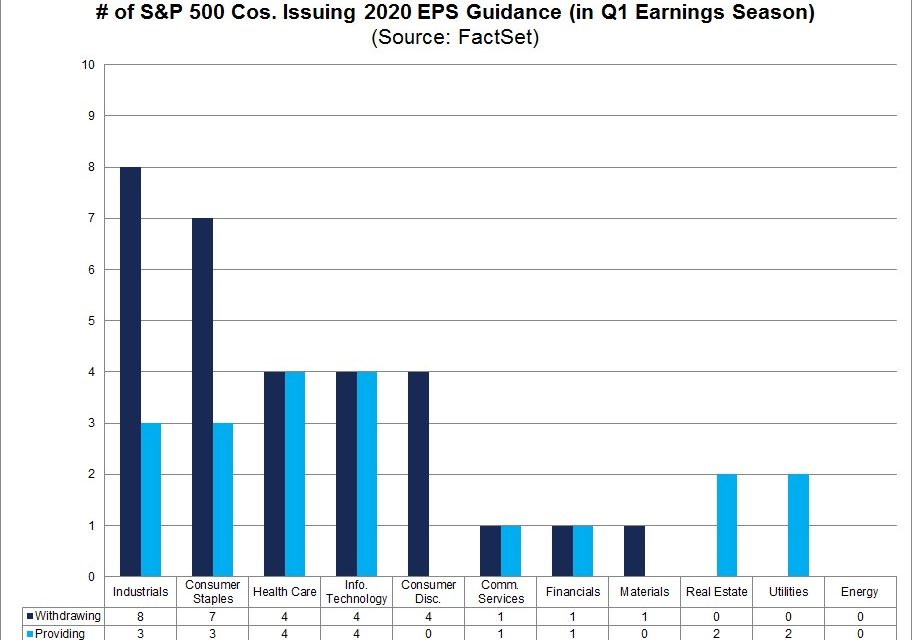 Many economic indicators worsened at a never before seen rate which is bullish because they can only improve from there. Brent oil had its sharpest decline ever, consumer sentiment fell the most in 2 months ever, and initial jobless claims hit a record high. Earnings estimates could soon be too negative or at least expect a very bad scenario. That’s great news for stocks as estimates will be beatable and the worst of the revisions will be over. Specifically, EPS estimates are falling at the greatest pace since 2009.

This could be the worst EPS estimate drop ever. Estimates for Q2 will fall the most this week and next week. Earnings estimates always fall the most during the previous quarter’s earnings season. This one is particularly bad because many firms aren’t giving guidance. We’re in the situation where even if a company gives bad guidance, it’s good news because at least the company has some visibility. That was the case with Intel. The business is pretty good if a firm has any clue what the rest of the year will look like.

FactSet reviewed the transcripts of the first 122 firms to report Q1 earnings. Of those, 50 firms commented on 2020 EPS guidance. 20 of them provided EPS guidance and 30 didn’t. The chart below breaks down the providers and withdrawals by sector.

As you can see, 8 industrials withdrew guidance which was the most. 7 staples withdrew which is surprising because this is a resilient sector. Some companies in this sector are doing better than normal because of the grocery hoarding. Healthcare and tech both had 4 withdrawals and 4 providing guidance. Remember, tech outperformed in this bear market because it tends to have low debt and is helped by people working from home/consuming content at home.

Finally, of the 20 firms that gave guidance, 10 lowered guidance, 6 maintained it, and 4 raised it. Perversely, some of the companies that are doing really well are selling off on their earnings reports such as Netflix. That’s because everyone knew they were doing well. The good news was priced in. According to The Earnings Scout, the consensus for 2020 full year EPS fell from $169.64 on March 23rd to $136.03. The current S&P 500 PE ratio is 21.6. That’s before the estimate is done falling. The current year PE ratio might be in the mid 20s within a few weeks. The good news is investors don’t price stocks off trough earnings especially when it’s clear 2021 will be much improved.

Renaissance Macro used the difference between ‘jobs plentiful’ and ‘jobs hard to get’ in the consumer confidence index that we will review next to estimate the unemployment rate. It came up with a rate of near 8%. Since the unemployment rate will likely be in the teens in the April report which comes out next Friday (not the first Friday of the month in May), it’s fair to say the Conference Board index is too positive at least in that part.

As you can see from the chart below, the USC Understanding America Study shows the percentage of Americans working fell from above 65% to 50%. That implies the unemployment rate is in between 20% and 25%.

That spike in unemployment will probably be fully shown in the May report which comes out in early June. This chart makes it look like the labor market has had an L shaped recovery. In other words, there has been no improvement from the bottom. Let’s see if that changes when the economy starts to reopen in May and June.

It’s not surprising that the consumer confidence present conditions index had its worst decline ever in the Conference Board April report. As you can see from the chart below, the 90.3 point drop from 166.7 to 76.4 was by far the worse decline ever. It’s not even close.

Even if this index was around in the Great Depression, it’s doubtful there would have been a worse 1 month decline. The good news is the index has already had the majority of the decline you’d normally see in a recession. The rate of the decline can’t get any worse. It would be negative if it fell 90.3 points again. This is the easiest explanation of the ones we’ve made where we’ve said the weakening rate can’t get any worse.

The surprising aspect of this report is expectations increased. That index was up from 86.8 to 93.8. We expected this index to fall much less than the present conditions index as was the case in the University of Michigan report, but we didn’t expect it to rise. Consumers expect either coronavirus to die down or the government and populace to be in good shape to deal with a second wave (treatments, testing, antibody testing & vaccine).

The rest of this report is a gauge of how bad these indexes can get because we already know the labor market and business conditions are weak. Somehow 20.8% of consumers said business conditions were good and 20% said jobs were plentiful. Obviously, more were negative on the jobs market and business activity, but the point we are making is these categories clearly can’t get close to zero because the labor market and economy can’t get much worse. Many economic reports will be worse than the trough of the Great Depression. It’s possible the optimism about the future seeped into the current conditions indexes, but that’s not what these indexes are supposed to measure.

The details on the optimism were quite impressive. The percentage of consumers expecting business conditions to improve in the next 6 months rose from 18.7% to 40% and those expecting more jobs rose from 16.9% to 41%. On the negative side, those expecting a decrease in short term income rose from 10.1% to 18.5%.

2020 earnings estimates have cratered and will fall much further this week and next week. By mid-May, the worst of the decline will be over (in rate of change terms). Many investors start looking at the next year’s earnings by the summer. That’s the best justification as to why the current PE multiple is so high. Few firms are giving 2020 guidance as expected. The current unemployment rate is in the low 20s, but the April report next Friday will show it is in the mid-teens. Consumer confidence on the present is terrible, but future expectations actually improved.