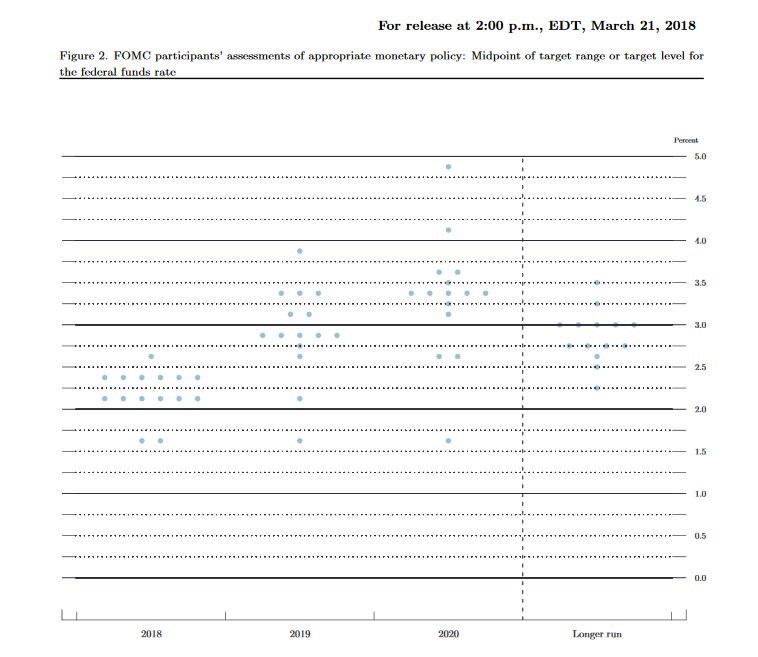 Obviously, Powell taking the helm at the Federal Reserve means potential policy changes, but that’s not the only thing that could change. The Fed’s communication strategy could also change. Its communication is how it delivers forward guidance. It’s arguable that the Fed’s forward guidance is the most important tool it has, so any change to how the Fed uses this tool is very important to monetary policy. Powell’s changes could formulate a legacy which affects how future Fed chairs operate. For example, Ben Bernanke started holding 4 press conferences per year after Fed rate decisions starting in April 2011. Since he left his position, Yellen and now Powell have continued that practice. These press conferences are an important part of guidance (along with the FOMC Minutes).

The other important part of these press conferences is that since 2015 the Fed has only raised rates at meetings where press conferences occurred. This limits the Fed’s ability to raise rates, so as to not shock markets. It’s fair to wonder if the Fed would hike rates 50 basis points at a meeting that has a press conference or hike once at a meeting with no press conference. The market historically hasn’t needed an explanation after every rate change, but if there was a hike without one now, because of the precedent, it would probably shock the market, causing excessive volatility. The goal of monetary policy guidance is to get the market to understand what the Fed is thinking so there’s less uncertainty. The Fed has boxed itself in by only hiking at meetings with press conferences, in an attempt to improve transparency.

Powell’s first press conference was interesting because it was only 43 minutes, making it the shortest one in the 7 year history of them. Since this was his first one, it’s reasonable to expect future pressers will be even shorter. Bernanke’s average presser lasted 57 minutes, with the shortest one being 45 minutes. Yellen’s average presser was 58 minutes. Bernanke and Yellen were PhD economists while Powell has more of a business background. Bernanke and Yellen focus more on economic theory, while Powell is a financial expert who is more of a technocrat.

Powell’s stylistic change isn’t the only news about the event. He stated that he’d consider having a press conference after every meeting, meaning 8 pressers instead of 4. As we mentioned, the 4 pressers limit the amount of rate hikes the Fed can do unless the Fed wants to raise rates 50 basis points at one meeting or raise rates at a meeting without one. 8 pressers gives the Fed more flexibility. It could also introduce uncertainty because the market won’t know which meeting will have rate hikes. Since the Fed has only hiked at meetings with pressers, increasing them could give a hawkish hint. This is why Powell stated he wanted to be clear if he makes this decision that it’s not thought of as a hawkish move, rather it will be to increase transparency. 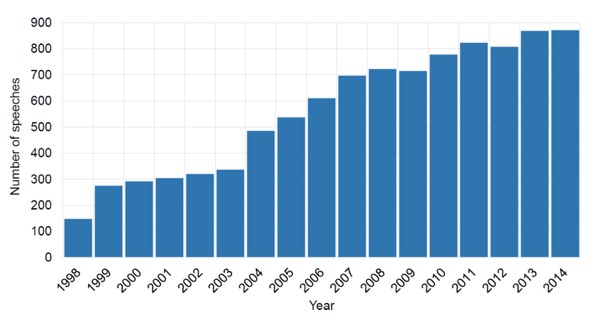 Forward guidance is the most important tool, but it is being blunted by the number of speeches. The increased number of speeches the central banks make has reduced the market’s ability to accurately forecast monetary policy. This might be because when the central bank speaks more often, it is reacting to each economic news event even though there hasn’t been any change to the long term forecast. It might be necessary to speak constantly during a crisis, but outside of them, there’s nothing new to add. There has been an extreme focus on each word the Fed says in its statements and meetings which is counterproductive. Because the Fed speaks so often, it needs to come up with different ways to express small changes which is getting ridiculous. Private investors need to decide the difference between words such as modest and moderate. If there were less speeches, it could be more effective.

It’s confusing why Powell is considering giving more press conferences even though studies show this level of transparency has led to negative effects. This situation where more information doesn’t help is antithetical to private markets because more information is a good thing to them. The central banks are always tinkering with the theories they follow, so there’s no consistent formula which gets the market to where policy will be. Some investors believe the Fed is only following what the market prices in. The market and the Fed feed off each other to come up with policy. Sometimes the Fed follows what the market prices in and other times it changes guidance to push the market in a certain direction.

While it’s good to have various opinions to have a balanced approach to policy making, too many policymakers lowers the ability of the private sector to forecast what the central bank will do with monetary policy. It’s difficult to price in what the central bank will do if there are mixed signals. Dot plots are also shown to be ineffective. As you can see from the chart below, there’s one governor projecting 12 more rate hikes by 2020 and one governor expecting 0 hikes in that same time frame. This confuses the market.

The higher turnover in governors hurts the private sector’s ability to forecast rates and inflation. However, just like having disagreements, turnover helps the central bank listen to new ideas which can be a good thing.

Some decisions, like whether or not to have a lot of governors, have pluses and minuses. However, increasing the number of pressers at the Fed seems to be a bad decision on most fronts. The only good aspect is it gets the Fed out of the box of being limited to make changes at 4 meetings. The Fed has historically made decisions in between meetings, so the Fed has recently constricted itself. One way to get out of this would simply be to guide for a hike at a meeting without a press conference. That would avoid needing to raise the number of pressers which is optimal because the increased number of speeches have hurt the ability of the private sector to predict monetary policy.