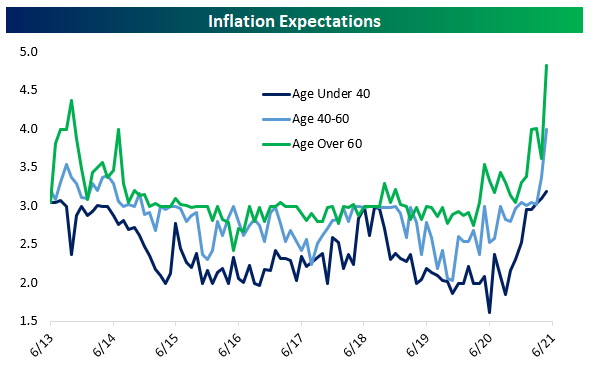 Apparently, inflation expectations differ by generation, but they are correlated. As you can see from the chart below, those under 40 expect inflation slightly above 3% which is accurate in the near term, but will be too high once this brief post-COVID-19 period ends. It’s up from just above 1.5% last year. The under 40 category is large, but it makes sense because everyone under 40 didn’t experienced the high inflation from the late 1970s to the early 1980s as adults.

Young people probably don’t think 10% inflation is possible. They can’t even conceptualize it. Older people are afraid the current bout of inflation will last like the last period. Older people have a lower propensity to consume since they are retired. High inflation hurts older people on fixed incomes the most. Luckily this period of high inflation will be over within a few months. Manufacturing and commodities will roll over in the next few months. The supply chain issues will be fixed by the end of the year.

Earnings growth is set to peak after this quarter which will have great results. That matters now because stocks are priced based on guidance. However, peak earnings growth isn’t that bad for stocks. Investors already priced in the current spike in earnings growth a few months ago. Stocks prices have been influenced by 2H earnings expectations for a few weeks already. Most individual investors looking at specific stocks price them based on 2022 EPS and sales estimates.

As you can see from the chart above, global EPS growth peaked in April. Bank of America is modeling a decline in EPS growth. This isn’t ground breaking stuff. It’s based on tougher comps and the lack of a fiscal stimulus. The Fed is set to end QE next year, but that shouldn’t have much of an impact on EPS growth. Stocks aren’t going to fall when EPS growth falls. There will only be a negative impact if the slowdown is more severe than expected. The weakness in manufacturing and commodities might simply be a normalization. The 10 year yield isn’t signaling a recession at all. It’s just showing that growth is peaking.

The consumer had a solid May even though the stimulus checks were mostly gone. The next bar to overcome will be the end of the pandemic unemployment benefits in June and July. As you can see from the chart below, the 2 year card spending growth stack has mostly been solid in the past few months. In May, card spending growth excluding autos and retail spiked. Total spending growth was solid, while retail spending growth ex autos fell slightly. In the week of June 12th, Redbook same store sales growth rose from 14.5% to 16.4%.

As you can see from the chart below, stocks as a percentage of household financial assets just hit a record high. Prior peaks have come before dreadful bear markets. Of course, you can only know the peaks in hindsight. While that’s true, this chart makes it seem like we are near a peak since it is a record. The only other peaks above 40% were in 2000 and right before the COVID-19 pandemic.

This current rally seems like a continuation of the bull market that started in 2009, not a new run. Bull markets don’t usually start with that much vigor and support. There was only true bearishness for about 2-3 weeks.

That being said, near 0% interest rates are pushing people into stocks. Dividend growth stocks are the new bonds. Their yields are higher than the treasury and they offer earnings growth. It’s hard to argue that a dividend growth stock with a yield of 1% and a PE ratio of 25 is expensive in a world where the 10 year yield is below 2%. Even with a massive spike in economic growth due to the reopening and government support, the 10 year yield couldn’t get to 2%. It’s hard to argue rates will be above 2% in the next few years.

The image below is a group of games investors play. For example, investors looking at the economy can bet on cyclical or secular stocks. Investors can either bet on the consensus or contrarian side. Contrarian investments are often wrong, but have much higher rewards. It’s critical to pick your spots when you want to be a contrarian. You can invest based on company specific analysis or macro analysis. Of course, it’s possible to do both. It’s great to have multiple layers to your theses.

Older Americans are wearier of inflation than younger ones, but all age groups have raised expectations recently. EPS growth peaked, but that doesn’t mean stocks are about to fall. Consumer spending was strong in May despite the end of the stimulus. Equities as a percentage of household assets just hit a record high. It’s tough to own bonds with rates so low. Long rates probably aren’t about to start a new long term uptrend. That was the high for the cycle. There are many games investors play. You should pick the games you are mostly likely to win.