Can The 10 Year Yield Fall Further? 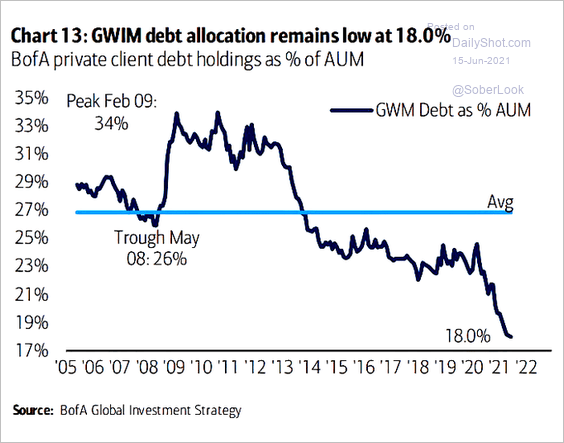 According to the June Bank of America survey, 72% of fund managers said they believe inflation is transitory and 23% said it is permanent. It’s extreme to claim the current situation is permanent when so much of it is unique. The end of the pandemic and the supply chain issues are temporary economic scenarios that won’t last. The fiscal stimulus won’t be repeated on this level until the next recession. It’s weird to claim this is permanent. At best, it will last longer than a few months.

The market knows it’s transitory. This is why the 10 year yield has fallen from 1.78% to 1.5%. It’s the most transparent temporary bout of inflation ever. As you can see from the chart above, the 10 year yield falls 67 basis points on average in the 3 months following the peak in CPI which was in May 2021 for this cycle. We think the decline will be lower than that because the market was more ahead of the game than usual. It has already been almost 3 months since the peak in yields. Much of the decline has already occurred.

No One Wants Bonds

In our previous article we showed the equity percentage of household assets hit a record high because no one wants to invest in bonds. Dividend stocks are the new bonds. According to the fund manager survey, the net percentage of asset allocators that said they were overweight bonds hit a record low (near -75%). While this is a new low, it was almost as low at many points in the prior economic cycle.

The chart above is a bit more dramatic. The debt allocation of Bank of America’s private clients is 18% of their assets under management which is a record low and much lower than where it was in the last expansion. The average is irrelevant because this works in cycles. The trough in 2008 was 26% which is obviously much higher than it is now even though we aren’t in a recession.

How much more can this fall? The answer is less than 18%. However, it will be much tougher to fall another 8%. Rates are already near 0%. If a 1.5% 10 year yield doesn’t get you to leave bonds, what will? The bottom in this reading could correlate with a top in stock valuations.

There Is No Risk?

Shockingly only 2% of fund managers said a correction of over 20% would occur in the next 6 months. The most common answer was a correction of between 5% and 10% (47% picked this). The stock market probably won’t crash over 20% in the next 6 months, but it’s a little disconcerting to see how prevalent this thinking is. No one thinks the year to date gains will be given back. If stocks were to fall more than 20%, it would be a major gift because of how cheap they would become.

As you can see from the chart above, a net 18% of fund managers are taking more risks that normal. It’s up 4 points from May, but still off the February peak. The innovation stocks peaked in February, while other cyclicals have rallied since then. Some of the retail meme stocks peaked in the winter, but others have replaced them. The meme stocks are a sideshow. Market sentiment is elevated, but so are earnings. Q2 earnings season will be fantastic. The bearish argument that uses trailing earnings will finally be put to rest.

Part of the reason tail risks are so violent is because no one is prepared for them. If a tail risk is widely followed, it probably means it’s not really a tail risk (a low probability event). The tail risk survey is still useful because it tells us which risks are most likely to be priced in.

As you can see from the chart above, 30% said inflation is the biggest tail risk which is very weird because 72% of managers said inflation is transitory. How can it be transitory and a big tail risk? Either way, high inflation won’t be a big risk to the economy once we get past the summer. Tied for 2nd was taper tantrum. The Fed is going to announce tapering in the next few months. It will occur next year. That is widely understood which should prevent a tantrum. 18% said asset bubbles. That’s vague enough to cover a lot of different scenarios.

Commodities Are The Most Crowded

The most crowded trade signal is already old. It says commodities are the most crowded trade, but lumber is already down over 40% from its peak. Plenty of other commodities have already peaked. Copper is the furthest below its 50 day moving average than any point in the past year. Supply is increasing in response to higher prices. Oil is the rare commodity which is still rallying and hasn’t had a supply response. It’s a few months behind the others. Bitcoin is no longer the most crowded, but it has increased significantly off its bottom. Markets move quickly!

The 10 year yield usually falls after CPI peaks, but this time might be different because it was so obvious CPI would peak in May. We knew this would be the peak months in advance. Investors are running from bonds and towards stocks. They are taking more risks than usual which is a bad signal. Just 2% see a bear market coming this year. The biggest tail risks are said to be a taper tantrum and high inflation. Commodities and bitcoin were named the most crowded trades.