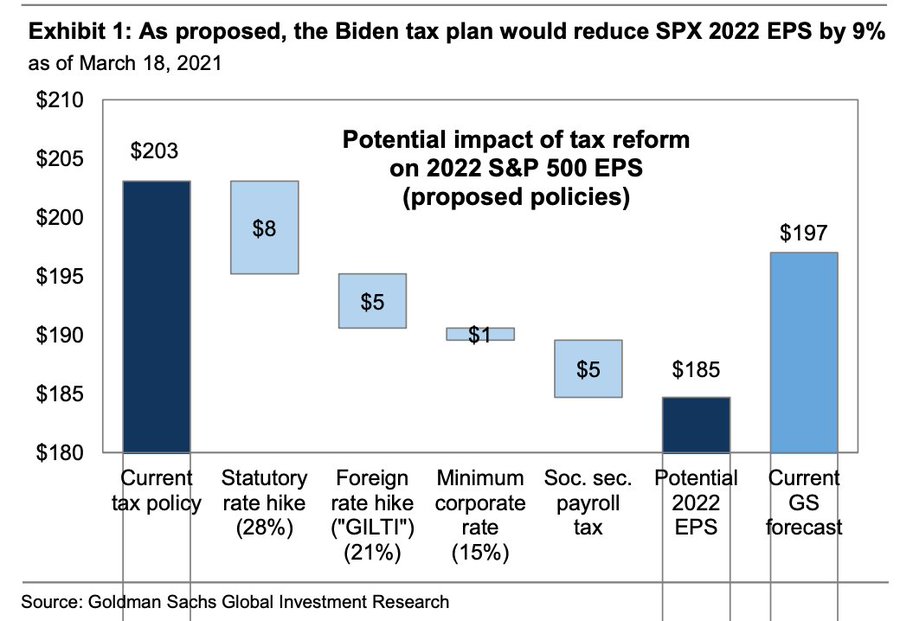 The economic data from March and April is going to be very good. One preview of this was Redbook same store sales growth in the week of March 20th. Growth rose from 8.5% to 9.4% due to the stimulus spending. The chart below shows the Evercore ISI company surveys index. It uses inputs from a variety of sectors. It’s already higher than at any point in the last expansion. That’s inline with current expectations for 7% GDP growth. The U.S. economy should contribute more to global growth in 2021 than China. This is potentially a once in a century-type event. Growth is expected to be 6.7%, 11.5%, 7.9%, and 2.8% in each quarter.

The entire rally in the Russell 2000 from early November to its March peak was based on anticipation of this growth. Now that it’s happening, it wouldn’t be a surprise to see stocks fall back down to earth or plateau. Some investors are already looking past this growth spike. It will be interesting to see if the travel stocks rally on great news in the next few months or if they shrug it off. Similarly, we wonder if the decline in software stocks fully prices in the coming sales growth weakness or if they have more room to fall. They still have extremely high valuations even after their recent correction.

This spring/summer should be the exact opposite of 2020 for small businesses. Restaurant sales are about to explode. They are already above their pre-pandemic level in Miami and at their pre-pandemic level in Las Vegas. As you can see from the chart below, in the first week of March, total small business sales growth accelerated to the highest level since the pandemic started.

This time it’s across the board improvements in food & drink, services, and retail. With the weakness in meme stocks and the reopening of the economy, retail investors are taking whatever money they have left in the market and using it on the real economy. The data on small call buying supports the point that some retail traders have already left the market. Now that their virality is gone, these meme stocks have nothing left to stand on.

If the Biden administration was fully on board with MMT, we would expect large stimuli without tax increases. However, this administration still believes deficits are a problem, so it plans to raise taxes in tandem with the potential $3 trillion infrastructure plan. An infrastructure plan was promised in the last administration, but nothing came of it. This time, something should happen because the Democrats have full control of the government and it’s popular.

This tax increase could be a disaster for corporate earnings if the full brunt of the plan is enacted. 2022 EPS could drop from an estimated $203 to $185. We think in the long run there will be a secular trend towards tax hikes in order to fight inequality. We’re not supporting such policy. We’re merely following the political winds and looking at the long term trends. As you can see from the chart below, corporate tax receipts as a share of US GDP have plummeted. This isn’t sustainable. Even if the current Goldman forecast of a $6 hit to EPS occurs rather than the $18 hit, this is just the beginning of higher taxes.

Don’t expect corporations to have extremely high margins and the stock market to rise as a percentage of the economy while the lower income group underperforms indefinitely. Many proponents of capitalism actually favor helping the lower class to protect the long term viability of the system. Many workers would support outright socialism if there were no social safety net or worker protections (minimum wage, labor laws, etc.).

The current mantra among investors is that founder-led companies are superior because the CEO is mission driven and probably has skin in the game. It’s a good story, but doesn’t perfectly line up with the facts because many of the founder led companies are growth-tech oriented names. Because those names are in vogue, investors ascribe positive associations with some of their characteristics. The table below lists the successful founder led companies. They might not do so well in a new market regime with higher rates and inflation. Back 10 years ago, many investors didn’t think founders were good leaders because they weren’t disciplined enough. Opinions change depending on the point in the cycle.

The economy is starting to heat up. That’s not the best news for cyclical stocks because it’s largely priced in. Of course, each company is unique. There could be some diamonds in the rough. Small businesses are about to do great in the next few months. We are already seeing signs of improvement. This is the promised land for businesses who lasted through the pandemic. Higher taxes are coming. This will make stocks more expensive than they currently look. There is a bias to prefer founder led companies because it’s common for growth-tech firms to be led by their founders. Those stocks have done well in the past 10 years, so of course investors like this characteristic. They might stop liking it if tech falls out of favor.