People Under 40 Have Very Little Wealth 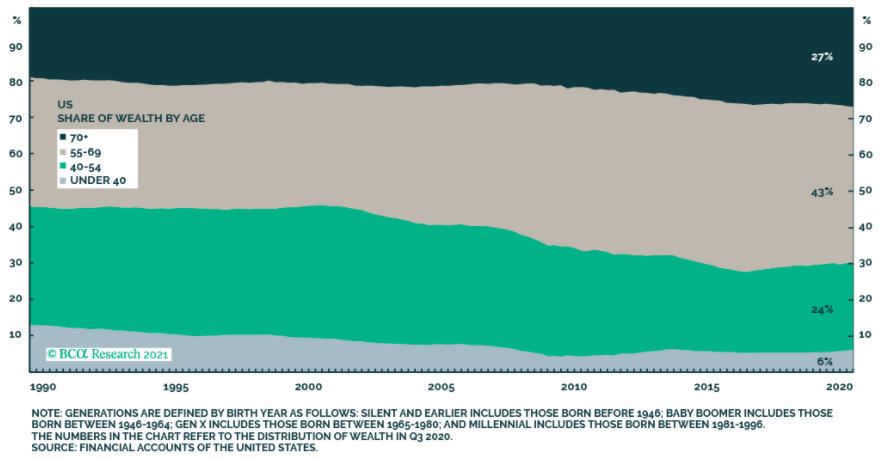 The claims data has largely been a mess this recession and early recovery because of fraud and software errors. The claims systems are old and people want to get away with getting more benefits than they should. It’s not always straightforward to make sense of the data. PUAs fell by 43,000 to 242,000. It seems unlikely that they will spike back up to where they were in the past few months because a lot of the decline was data improvement/getting rid of fraud.

As you can see from the chart below, unadjusted combined claims fell to 899,000. That’s the first time weekly new combined claims were below 1 million. Continued claims in the week of March 13th fell from 4.134 million to 3.87 million. The number of people on all benefits programs rose from 18.22 million to 18.95 million in the week of March 6th. We might see this drop in the next few weeks judging based on initial claims and the successful vaccine rollout.

It’s tough to predict muddied data. It’s actually easier to predict markets which isn’t how it usually is. Usually, you can know the data in advance and still not have a clue how the market will react to it. Of course, it’s more important to know the trend than weekly anomalies in claims. The trend is clearly towards improvement in the labor market.

Younger People Have No Wealth

People under 40 have a very small percentage of the wealth in America. As you can see from the chart below, it’s down from about 12% in 1990 to about 6% in 2020. That’s due to a few reasons. Firstly, there are more older people than 31 years ago. Older people have had decades to generate wealth. Even starting with $10,000 will get you far if you compound it long enough.

Secondly, younger people are entering the workforce later in life. It’s getting more difficult to make a good income as a teenager. There’s no doubt that some people don’t actually use what they learn in college at their first job, but the system is set up that you need to go to college for most professions. Once employers stop caring about degrees, people will stop going to college. We aren’t at that moment yet in the majority of fields.

Thirdly, young people have student debt. Many young people don’t pay off their student debt until their 30s. The table below is a look at the average millennial net worth by birth year. About half of millennials have a negative net worth. Most people who graduate college eventually get out of the debt hole and generate wealth.

On the negative side, it’s unfeasible to have a child in your 20s if you have a negative net worth. It’s a tight squeeze to have all you children in your lower 30s which is partially why the birth rate has been dropping. Millennials will largely end up being fine economically especially if they graduated college. However, it’s increasingly likely that this is the start of an eventual peak in the population unless policy attempts to resolve some of the issues facing young Americans, or at the very least not make things worse.

This year is very different than last year because cyclical value stocks are doing very well. That’s in part due to the rising 10 year yield. It’s also due to the strong vaccination program and the valuation mean reversion. As you can see from the chart below, non-profitable tech stocks and companies with negative earnings and positive sales growth in 2020 are almost perfectly correlated. That’s because most of the companies that lost money and grew sales last year were in tech. These two groups have declined in the past few weeks. They became crowded trades. The valuations got too high. They are in a tough spot because demand growth for software will fall and they have tough comps.

Weak sales growth combined with high multiples and losses is a complete disaster. Many growth investors have no idea what is coming because they never cared about losses or valuations before. They even glorified holding stocks like this through massive crashes. It’s almost impossible to hold a stock through a 70% collapse. We don’t recommend doing that. On the other hand, firms with negative earnings and declining sales in 2020 have done well because investors know the reopening will bring them sales growth and maybe profitability. This is their time to shine. 2021 might even better than 2019 for many of these firms as consumers have a lot of savings that’s ready to be spent.

The chart below shows all the themes that worked in 2020 aren’t working in 2021.

The most shorted stocks, the IPOs, and the SPACs are now crashing. Unfortunately for SPACs much more pain is coming because more supply is coming. Just like investors in growth tech stocks that lose money, SPAC promoters and investors don’t realize that the party is already over. Speculators will keep buying the dip, but new highs are not likely to be made. When valuations don’t make sense, there isn’t a bottom until the system is cleansed of optimism.

Jobless claims fell, but that was because of two states. The data is very murky right now, but we think the labor market is improving. There will be well in excess of 500,000 jobs created in the March BLS report next Friday. People under 40 have a low percentage of the overall wealth in the US. Most millennials will be fine financially as they age, but they won’t have as many children as prior generations. It’s becoming increasingly rare for a couple to have more than two children (unaffordable for most). The money losing stocks, SPACs, IPOS, and other software names are doing poorly. This is the first step in what will be a brutal bear market for this group. That means there will be a great buying opportunity in these names sometime in the future.