How Overheated Is The Stock Market? 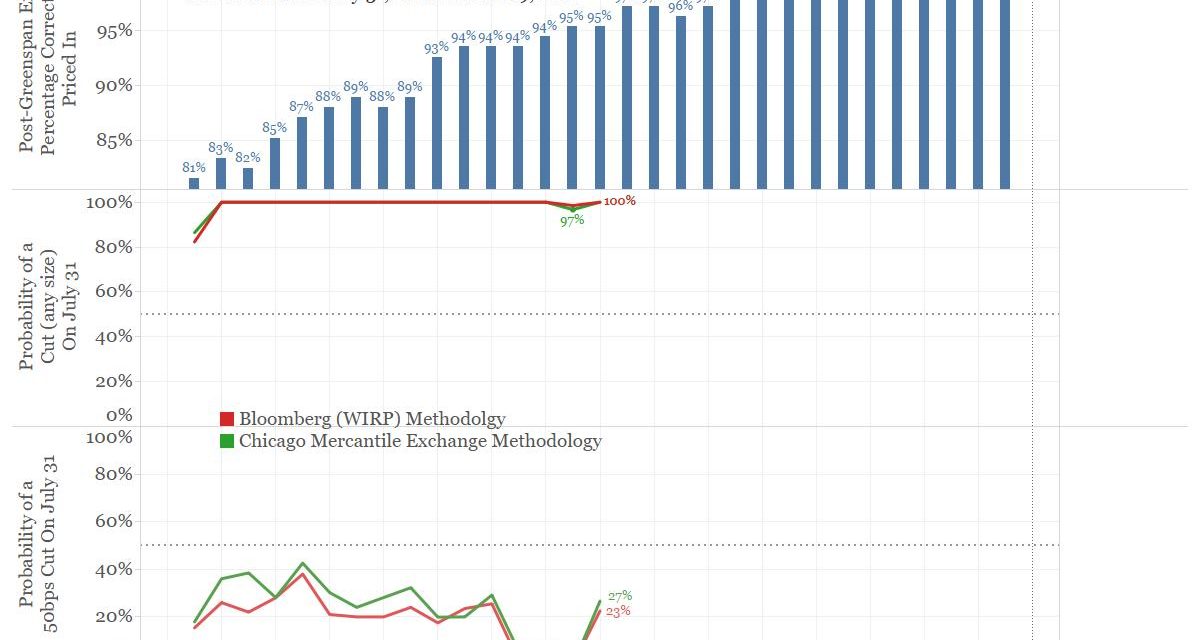 On Twitter we had a conversation with the viral @StockCats on how overheated the stock market is, where stocks have moved up too fast and sentiment is too high. On the one hand, stocks have had a remarkable year. On the other hand, many of the bears are more confident than ever in their recession calls. Skepticism is great for bull markets, although, to be clear, the data needs to prove the skeptics wrong or else stocks will fall. Obviously, sentiment isn’t everything. That’s why the discussion of how overheated the market is starts off this article, rather than making up its entirety.

This indicator was a great bottom signal in December, but it wasn’t a great top signal this year since the percentage was elevated in February and the correction was in May. Similar to this index, the CNN fear and greed index shows there is some overvaluation in the market, but it’s not the highest of the year. The index is at 58 out of 100 which signals greed.

The S&P 500 has obviously been rallying and economic reports have been missing estimates. Recently, job openings, small business sentiment, the ISM non-manufacturing PMI, and the ADP report have missed estimates. The BLS employment reading and the ISM manufacturing PMI beat estimates. Clearly, economists aren’t fully on board with the slowdown happening. They should be because the Q2 GDP report will likely show weakness as the median growth estimate is 1.7%.

Wednesday was a big day for monetary policy because Powell gave a testimony to the House financial services committee and the Fed’s June Minutes came out. Powell ended up telling us what the Minutes were going to say a few hours early. The two were consistent which is useful because it means the solid BLS report and the latest news that America and China are restarting trade negotiations (which seems to be already reversing) haven’t caused the Fed to change its mind.

There always seems to be one word or phrase that defines the Fed’s thinking. Usually, it’s a unique terminology that sums everything up. In late 2018, the term was ‘autopilot’, which caused a big decline in stocks. The term earlier this year was ‘patience’ which ended up being incorrect because the Fed is about to cut rates in July. That’s not much patience. The Fed stated it would be patient “for some time” in May. Apparently, some time is just over 2 months.

The keyword in Powell’s testimony was ‘crosscurrents’. He stated, “Inflation has been running below the Federal Open Market Committee’s (FOMC) symmetric 2 percent objective, and crosscurrents, such as trade tensions and concerns about global growth, have been weighing on economic activity and the outlook.” The Fed is cutting rates in July because inflation is below its target and falling, global growth is weakening, and the trade war is creating uncertainty.

Trade policy and slowing global growth are crosscurrents. The American Markit PMI is actually one of the best in the world which shows why the Fed is cutting rates despite the lack of recession signs. Specifically, the Markit global PMI composite index was steady at 51.2 in June. The new orders index increased 0.3 to 51.6 and the future output index was down 0.4 to 59.4. 18 of 30 countries had contractionary manufacturing PMIs and 3 out of 13 had contractionary services PMIs. Both US PMIs were above 50. Its June composite PMI was 51.5.

Besides watching the global market PMI, the Fed must have seen the NFIB small business sentiment report where the uncertainty index was the 4th highest ever. As you can see from the chart below, the rolling 3 month average of the Fed’s usage of the terms: challenges, fears, risks, shocks, and uncertainties is elevated.

This is about trade and the global economy. Because the trade war has caused the Fed to be dovish, it might not be the best thing for stocks for there to be a trade deal (which doesn’t seem likely now). Maybe the sweet spot is where we’re at now, namely no new tariffs, negotiations, and a dovish Fed.

Powell Most Dovish Ever

In his testimony, Powell was his most dovish ever. The chart below shows the Fed was the most dovish since 2017; Powell took over in February 2018. The June Fed Minutes echoed this perspective a few hours later as it stated, “Several participants noted that a near-term cut in the target range for the federal funds rate could help cushion the effects of possible future adverse shocks to the economy.” Some needed to see more data before supporting rate cuts. The weak economic surprise index suggests they might be on board with a cut now.

2 Cuts Back On The Table

Powell mentioned that the June jobs report didn’t change the Fed’s opinion on rates as he stated, “Since the June meeting and, even for a period before that, the data have continued to disappoint.” Therefore, it’s appropriate that the chance of a 50 basis point cut on July 31st went back up to where it was before the BLS report came out. There is currently an 18.3% chance of a double cut. As you can see from the top chart below, when the Fed meeting is 19 days away, there is a 94% chance the Fed funds futures market is correct based on data from 108 FOMC meetings.

The Fed will cut rates on July 31st. Powell was so dovish that the chance of a double cut increased. The stock market rejoiced in reaction to this news, rallying to a new record high. There is some overheating in the market while the economic data continues to show the economy is in a slowdown.