How Healthy Is The Consumer? 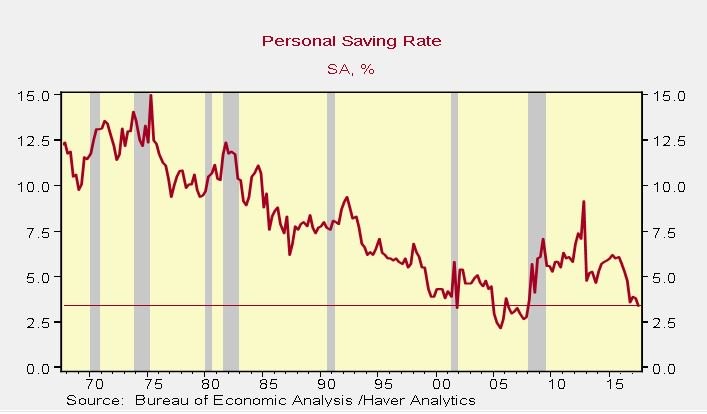 The consumer is the lifeblood of the economy. Austrian economists differ from the mainstream viewpoint on what drives the economy as they say production drives economic growth whereas Keynesian economists believe that consumption and demand drives the economy. The truth is that both the consumer and the producer are important, something we detailed in our business cycle article. The consumer is able to purchase goods and services because of the output/value produced/created in the form of income. Examining one side of the equation completely disregards the other, which are codependent.

Demand is certainly a factor in any successful business, however, it’s not always obvious where it exists. Sometimes a business can create a product that fills a need that consumers didn’t know was a need. The greatest innovators, such as Steve Jobs, had the mindset that consumers don’t know what they want until they see it in the stores. This would go along with the idea that Austrians have about production driving the economy; this philosophy is also called supply side economics. With technology, consumer needs aren’t obvious. If you would’ve asked people 20 years ago if they needed to upload pictures to the internet to show people their lives, they may have thought that was creepy and unnecessary. Instead a person can share a printout of pictures through snail mail or in person. Now apps like Facebook and Instagram have become needs for most people. It’s not a need like food, water, and shelter, but the point is it is used by most consumers who have internet access.

The key point we’re getting at is the consumer is important to the economy whether consumption or production is driving economic growth. Both sides want to have a strong consumer. While Austrians tend to not like debt being issued in excess proportions, economists on both sides would acknowledge the free flow of capital for loans is a sign the economy is healthy.

The advanced estimate of the Q3 GDP report showed 2.95% real annualized growth. This was helped by the consumer as personal consumption was up 2.4%. The consumption added 1.62% to GDP growth which means it accounted for about 55% of growth. Obviously, the consumption number fluctuates from quarter to quarter, but it is critical to sustainable GDP growth.

With GDP report used as an example for the importance of the consumer, let’s look at the health of the consumer to see if GDP growth can continue the solid pace it has been on in Q2 and Q3 2017. The chart below shows the historical amount Americans estimate they will spend on Christmas gifts. This is a version of consumer sentiment. 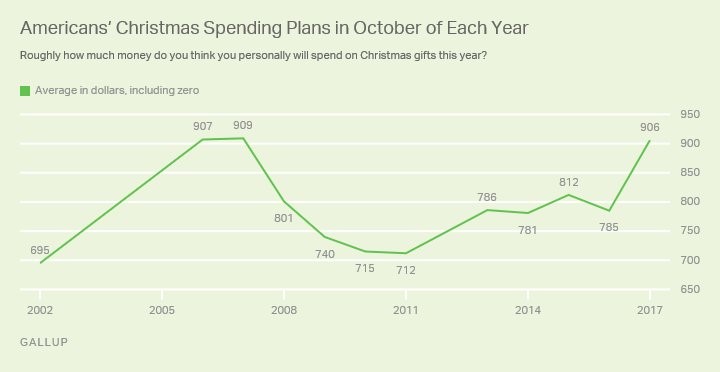 The Christmas Spending Forecast Shows The Consumer Is Optimistic

The estimate has jumped from $785 to $906 which is near the record seen in 2007. This doesn’t necessarily mean the Christmas season will be great because the fastest growth the National Retail Federation reported in the past 5 years was 2014 which had 5% growth. In that year, the survey showed a decline in spending expectations. Therefore, the correlation between this survey and actual spending isn’t high enough to trust it completely.

While consumer optimism looks great, the personal savings rate doesn’t look good; it’s the lowest since just prior to the last recession. As you can see from the chart below, consumer savings increased during the last recession as people were worried about the next shoe to drop.

The Low Savings Rate Is Ominous

At the time, there was worrisome speculation that people wouldn’t be able to withdraw money from the banks. While that didn’t create runs on any banks, it did encourage people to save for a rainy day. It’s not the best strategy to start saving your money after a crisis hits. The point of being conservative is to be frugal when times are good to be able to weather an economic downturn. Unfortunately, human intuition is backwards looking. Use others’ mistakes to rectify your own finances during this current period where the labor market is relatively strong and asset prices are very high.

We’ve painted two somewhat different pictures so far. We’ve discussed how strong the labor market is and how the consumer is ready to spend increasingly during the holiday season, but we’ve also mentioned how the personal savings rate is near the lows of 2005 which was the lead up to the financial crisis. The chart below helps us connect the dots. It shows the change in household net worth as a percentage of disposable income. 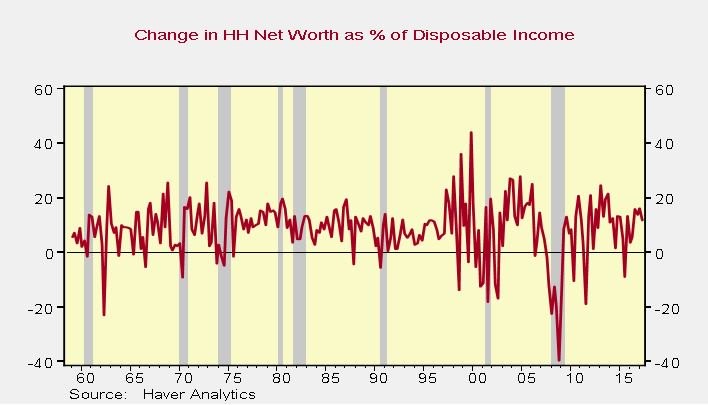 Change In Net Worth As A Percentage Of Disposable Income

The change is now high because financial assets like stocks and real estate are increasing in value. While people are spending a high amount of their incomes, they are spending a low amount of their net worth because stocks have gone up so much. The bears’ counter point to this is that the paper wealth will disappear when stocks crash. We’ll cross that bridge if/when it gets here. For now, the consumer is somewhere in between the elated state surveys show and the dire state the savings rate shows.

We reviewed the thoughts of the two sides of the economic spectrum. They differ on what drives economic growth which is why they differ on policy. Both sides think the consumer is important to the economy. We gave a balanced opinion of the consumer. Hopefully, you can be smarter than the average consumer by saving when times are good to use the money to weather the storm when times are bad. The great part about this is it requires no market timing. The worst case scenario is saving too much money because the expansion is long. Who complains that they saved too much?