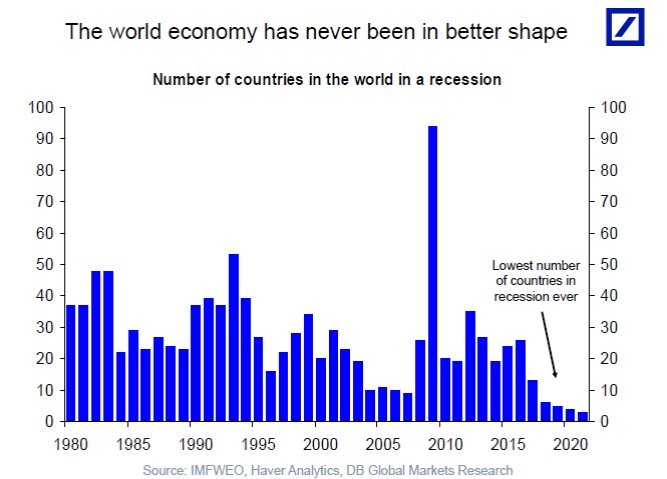 The question on many investors’ minds is can there be too much of a good thing? While GDP per capita has been low, the sustained growth which has been relatively consistent along with low inflation and a low amount of global conflict makes for a great stock market. Even low unemployment hasn’t created inflation. Commodity prices have remained low which is great for financial assets like stocks as input costs are lowered. That’s a chicken or egg scenario. Are financial assets doing well because commodities haven’t gotten a bid or have they not gotten a bid because all the money is flowing to stocks and bonds? The low interest rate environment allows for energy producers and other commodity producers to borrow at lower costs which causes supply to increase as breakeven costs are suppressed. However, commodity prices being low causes inflation to be low which causes rates to be low. As you can see, everything is intertwined like a ball of yarn.

We described the great scenario for stocks. It has led to a market which hasn’t had a correction of more than 2.8% in 2017 as we approach the record long streak without a 5% selloff. The market is in its usual state of trying to price in various economic metrics and earnings trends. The major difference between this one and every other one is most of the factors are pointing in the positive direction. One other aspect which we have discussed previously is the expanding profit margins among the tech firms. This has pushed overall S&P 500 margins to a record high. As you can tell from all these positive signs, they don’t stay in one place very long. S&P 500 margins often revert back to the mean. Part of the growth in margins is secular as software companies garner a larger percentage of the total S&P 500 profits. It’s the same case for economic metrics as the economy is always changing.

The extraordinarily low volatility in the market has made October 2017 have the lowest average VIX ever. This is in tandem with investor sentiment. Given the low volatility and length of this bull market, it’s not surprising to see sentiment jumping off the chart. As you can see, the bull to bear ratio is at the highest point since 1987 which is the year of the October crash where stocks fell 22.7% in one day. It would be easy to spread fear about how stocks are going to repeat that because bullishness is so high. That would be ridiculous because investors were almost as bullish from late 2013 to early 2015 without any major repercussions. The point we’re making is to contextualize the situation the market is in. 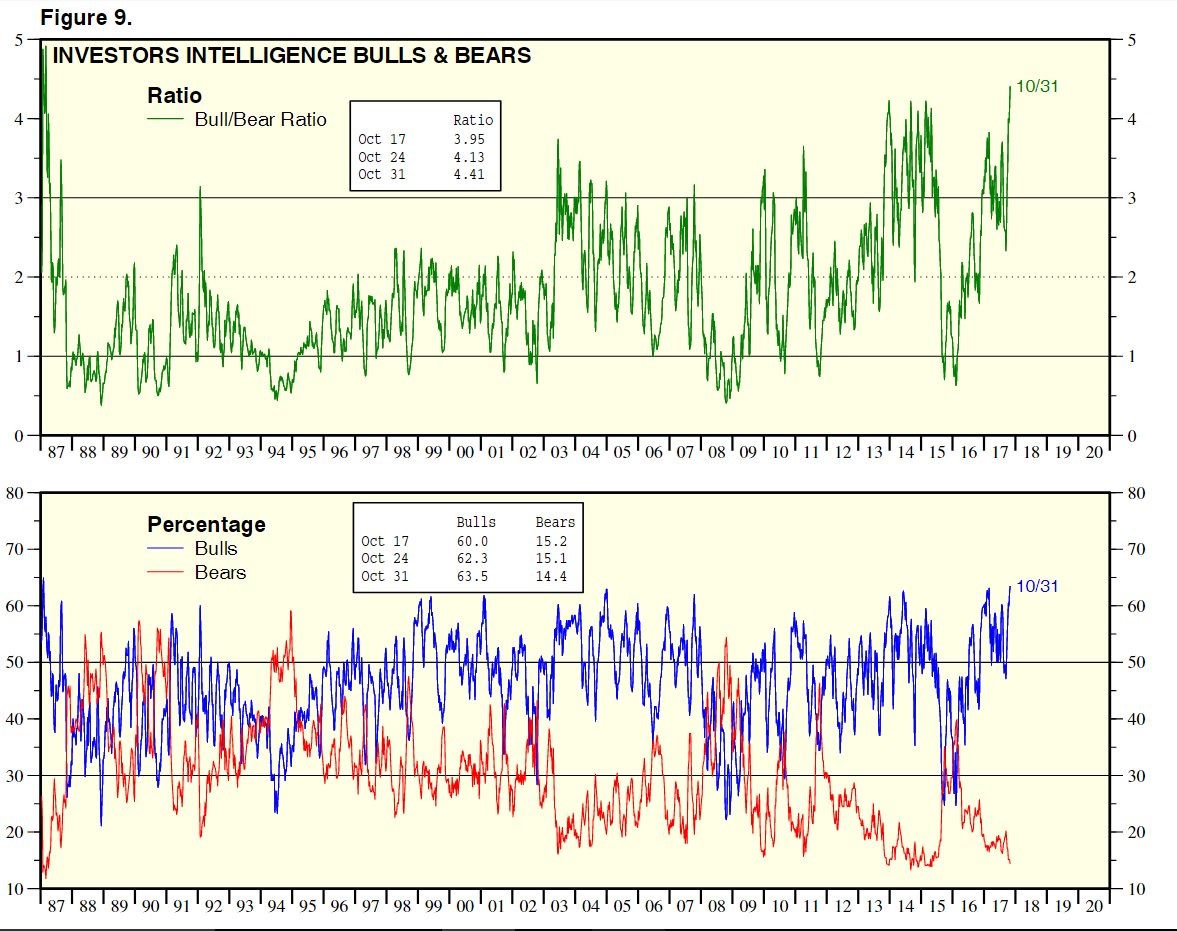 We discussed why stocks are in a particularly great state and put a bow on top of that argument by showing the investor sentiment. The economy is also in good shape as the labor market is doing well and the consumer is very optimistic. The chart below puts an end to discussion surrounding the economy. It shows the number of countries in a recession.

Few Countries Are In A Recession

The number is near a record low in 2017. It’s expected to reach a record low in 2018 and continue towards zero in the following years. This projection is likely too optimistic as no one anticipates a recession until the economy is already in one. It’s doubtful many predicted a two year depression for Brazil before it occurred recently. Even if the record isn’t broken in 2018, the fact that the global economy is growing in such a synchronized fashion shows how strong overall global growth has become, despite it being so tepid in many developed regions. In 2016, after the election of Trump and Brexit, economists feared a slowdown in trade growth because of protectionism, but the opposite has occurred – trade growth has accelerated.

Most Of The Returns Have Been Realized

Stocks are forward looking so the great news we’ve discussed is mostly priced in to equities. You should never buy stocks because the present is good. Only buy when you think the future will show improvement. The chart below shows how forward looking stocks are.

Stocks do the best when unemployment is high and do the worst when it’s low. That’s because by the time unemployment has gotten to above 9%, the recession is mostly over since unemployment is a lagging indicator. On the other hand, when the unemployment is below 5%, it means the expansion has been going for a few years. Low unemployment is usually accompanied by a hiking Fed and expensive stocks. It’s not the scenario you want to be buying into. With the unemployment rate at 4.1% and falling, we are in the blue bar on the right. If it starts to increase, we switch to the worst quadrant. This shows how momentum is a factor in forecasting stock returns. When unemployment is low and rising, it’s a telltale sign of a recession. The last few recoveries have bottomed at an average unemployment of 3.8%, so we’re closing in on the end of the business cycle according to this metric.

As we mentioned, a low unemployment rate usually correlates with an expensive market. Managers who get paid to invest money use the term ‘fully priced’ to make it sound good, so investors stay the course. To be frank, the market is priced at a point which provides a geometric return of -2.8%. It’s not a great position to go long; it’s the situation to raise cash on rallies. The table below shows the same thing the unemployment chart above displayed. The S&P 500 is in the circled scenario as the CAPE is 31.6 and rising. That correlates with decent returns, but the market falls to the worst quadrant when the CAPE starts falling. When the momentum subsides, the market is in trouble. 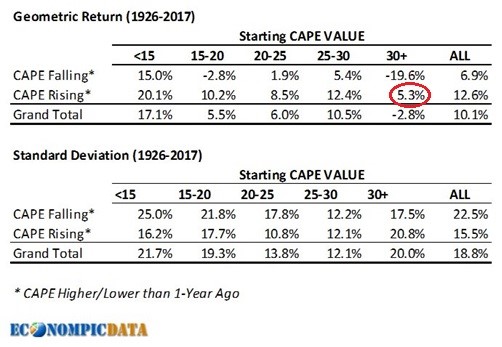 Everything is great. We’re not being sarcastic when we say that like some bears. The problem for stock investors is this scenario implies most of the upside in stocks is capped. If the economy and earnings are great now, there’s not much room for improvement. On average, when the momentum stops in a low unemployment, high CAPE environment, it’s good idea to avoid stocks. Maybe you’re gutsy and want to wait until the momentum fades. The problem is by the time the unemployment rate starts rising, stocks will have fallen substantially. That’s why it makes sense to sell rallies in stocks and shift towards less risky assets in your portfolio allocation.