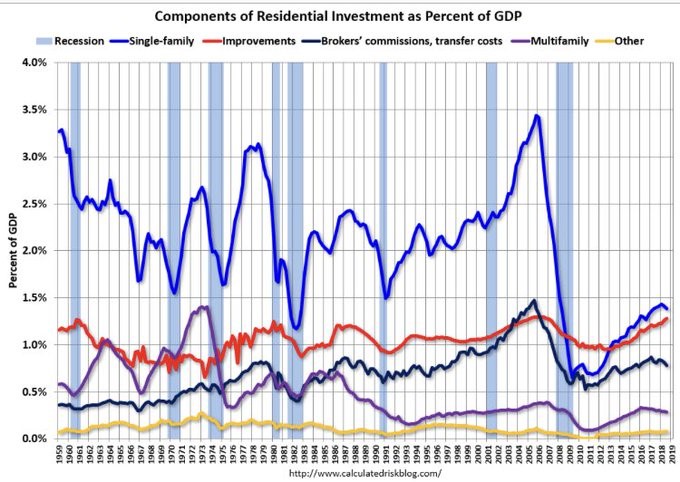 Just because housing was considered highly unaffordable in 2018 as interest rates rose doesn’t mean another housing bust is coming. Some areas with the hottest housing markets like Seattle will cool down, but the overall market won’t crash the economy like last recession.

Specifically looking at Seattle, the latest results aren’t great as November pending sales fell 10.4% and closed sales fell 15.3% year over year. Prices were up only 4.2% year over year and inventory increased from 1.39 months in October to 2.32 months.

The Seattle housing market isn’t at its trough yet, but we can see in the overall data, which we will review in this article, it hasn’t cratered the national market. With the latest decline in interest rates because of worries about a slowing economy, it appears a weakening labor market will be more of an issue than high rates in the intermediate term (1-2 years) for the housing market.

Housing Not As Important To GDP

The chart below shows single family residential investment is less than 1.5% of GDP, while it was almost 3.5% of GDP in 2006.

That level in 2006 was the highest since at least 1959. That was one of the many signals which could have tipped you off about the impending doom in the housing market. It hit close to 0.5% in the aftermath of the recession. Housing starts were weak as the excess supply from unsold homes and defaults needed to be worked off. The current percentage is near previous cycle troughs.

In a previous article, we showed how housing starts this cycle have peaked near previous cycle troughs. New multi-family housing and starter homes are needed. Interestingly, Minneapolis is abolishing single family zoning which will allow for more affordable housing to be built.

The chart below digs deeper by showing housing starts and permits as a percentage of the population. 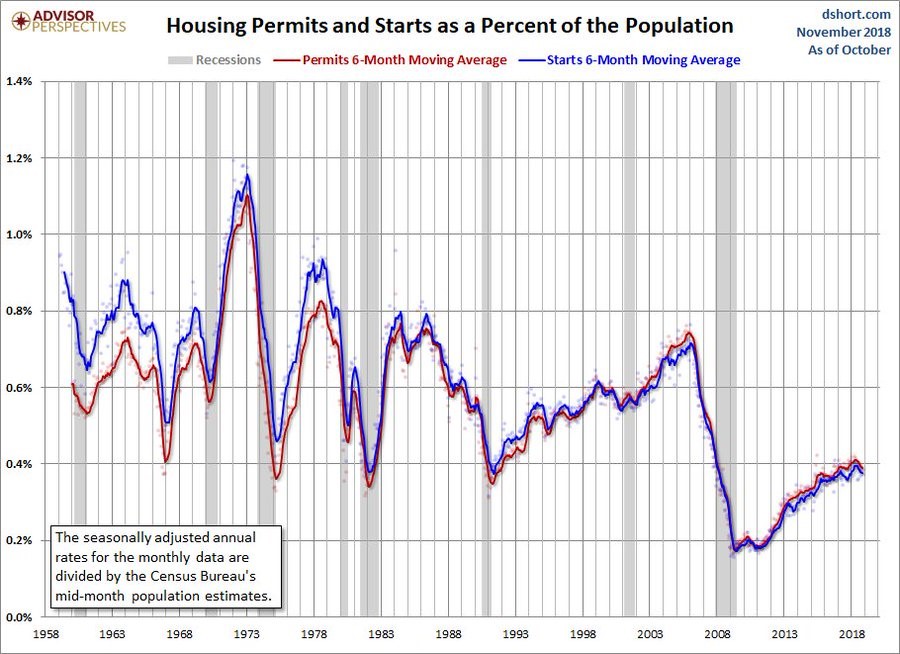 There Won’t Be A Large Housing Bust

If housing prices fall, it will be because of a sharp rise in the unemployment rate and possibly increasing interest rates. We aren’t saying there can’t be a housing downturn. We’ve already seen modest weakness this year even though the unemployment rate is the lowest since December 1969. The point we’re making is next recession won’t mainly be caused by a decline in the housing market.

As you can see from the chart below, housing starts in the previous cycles were higher than the demographic demand for homes and housing formation. 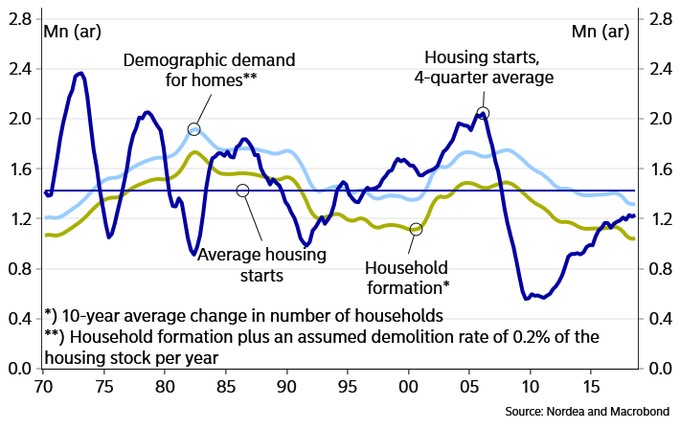 Because the housing market has been weak, household equity growth in Q3 was up the least in 2 years. That being said, it increased 9.4% which is $775.2 billion. Home equity increases when house prices increase and when home owners pay down their mortgage. The map below shows the year over year changes in home equity by state in Q3. 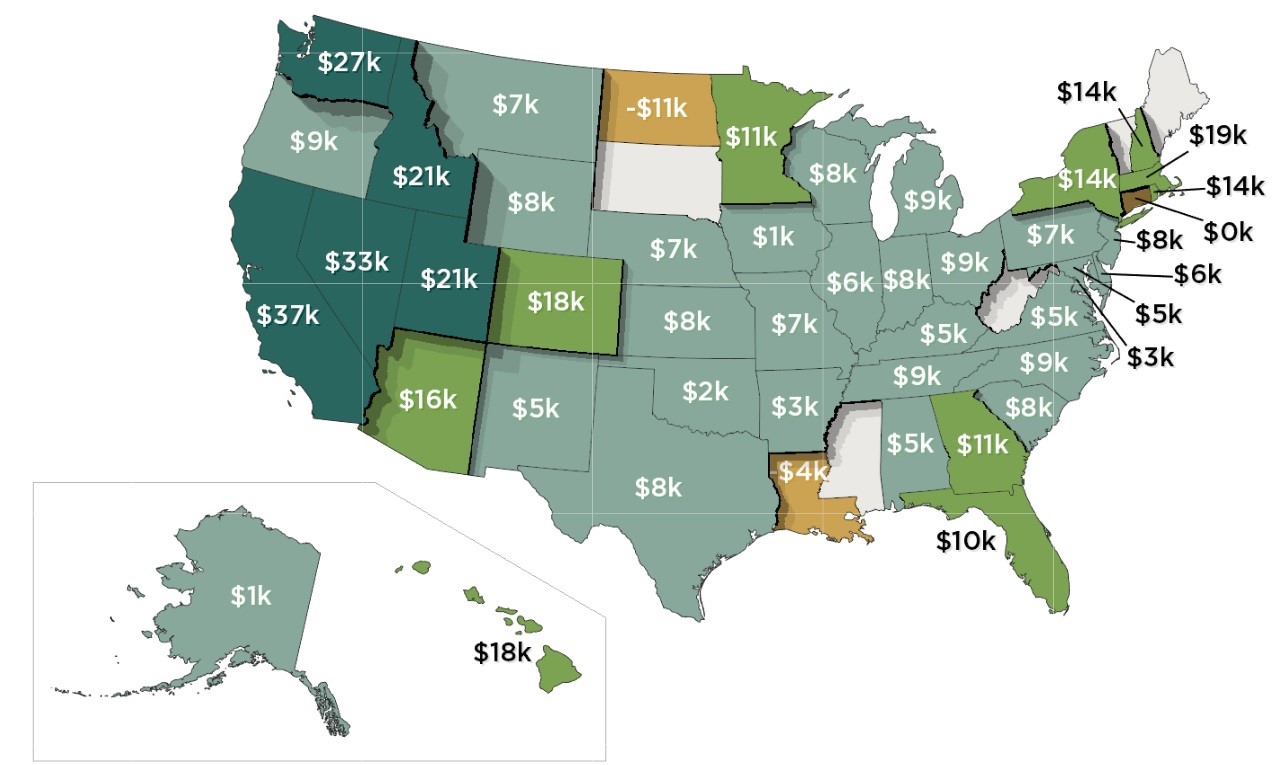 The Midwest saw relatively low increases. That’s because prices are lower there and this data is in dollar terms. The Denver, Seattle, San Francisco, and Las Vegas housing markets showed their strength as Colorado, Washington, California, and Nevada had increases of $18,000, $27,000, $37,000, and $33,000. Home owners in these areas shouldn’t take this appreciation for granted as it isn’t sustainable. In a pessimistic scenario, prices may fall which means if you can delay your house purchase by a couple quarters, you could save some money.

Further great news from this report was that the share of home owners with negative equity fell 16% to 4.1%. That’s a decline of 416,000 homes. The worst case scenario in homebuying is having no equity after paying the mortgage for a few years. The forced savings goes down the drain as the value of the house falls. You can avoid ever having negative equity by having a large down payment. However, there’s a huge opportunity cost to buying a house that goes down in value.

To be fair, if you bought a house in 2007, your investments in stocks would have done terribly as well. You can’t just assume stocks will give you 8% compound annual returns if you don’t buy a house. That’s what makes the decision to buy a house versus rent and the decision of how much to put as a down payment on your house complicated to gauge. The one guaranteed benefit of putting at least 20% down is avoiding PMI insurance. The rest is uncertain. 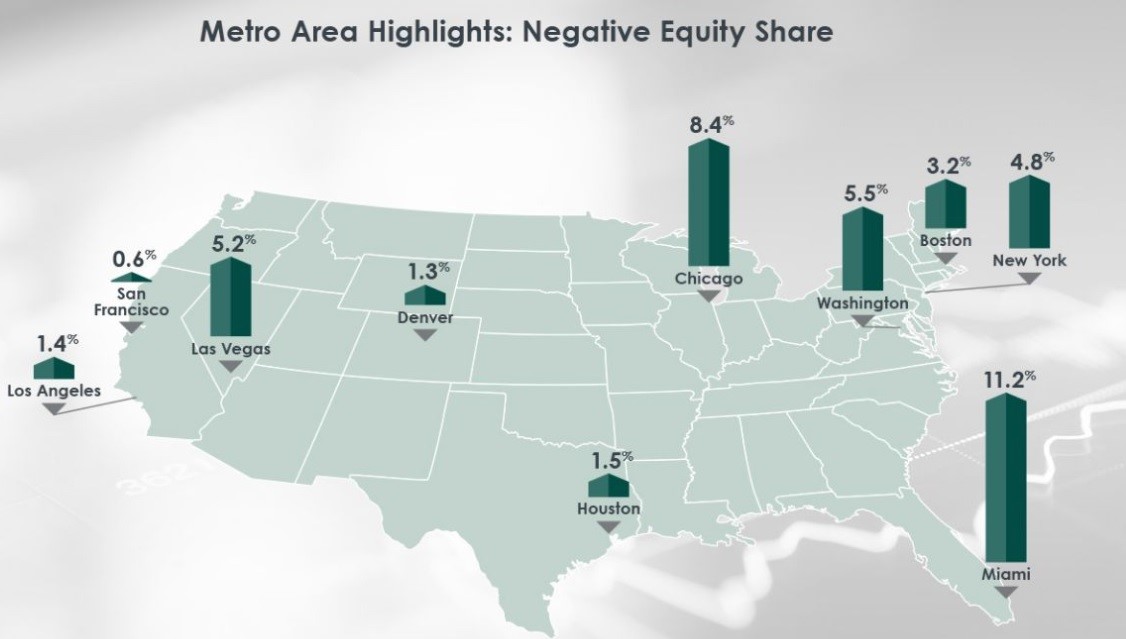 Even with the recent acceleration in price growth, Las Vegas still has 5.2% of homes with negative equity. Miami has 11.2% as it was hit very hard by the housing bubble burst. The national percentage peaked at 26% in Q4 2009.

The housing market has faced weakness in 2018 because of higher rates and a lack of affordability. Recently rates have fallen. If other cities follow Minneapolis, housing will be much more affordable in urban areas. If the housing market has a downturn because of weakness in the labor market or rising rates, it won’t catalyze a recession. Labor market weakness could imply a recession is in place already which would mean there was a different recession catalyst. The great news is most cities have fully recovered from the housing bubble burst as only 4.1% of mortgages are underwater.