Are People Investing In Stocks With Stimulus Checks? 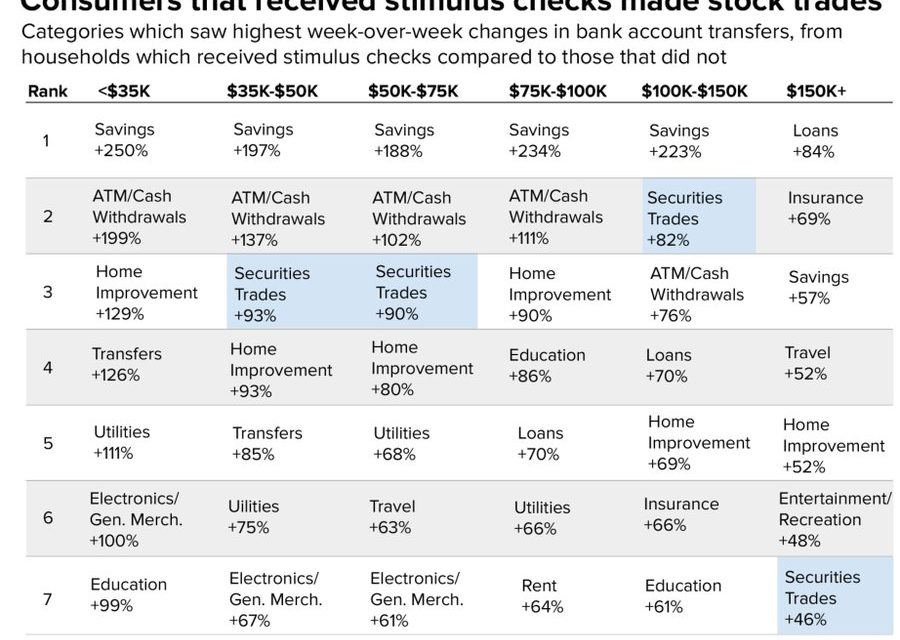 People have been stuck at home during these shutdowns with nothing to do. Sports were canceled which eliminated sports betting. These factors along with the dogma of buying the dip led to a surge in retail trading activity in stocks. It’s also easier and cheaper than ever to trade stocks. The most popular investments by retail buyers are tech, single digit stocks, sports betting (ironically), and anything that’s down a lot. Many new investors tend to invest in what they know which is the popular tech and household names. This swing in emotions is why it sometimes helps to know who owns a stock with you. If a stock you own becomes rented by retail traders, you can buy protection, sell, or just expect volatility while staying the course.

The theory that people are using their stimulus checks to speculate in stocks is real. As you can see from the table above, the 3rd most popular thing to do with the check for households making from $35,000 to $50,000 and from $50,000 to $75,000 is securities trading. For households making $100,000 to $150,000, it’s the 2nd most popular way to spend the money. The Dunning Krueger effect is in play as people with very little knowledge think they know more than the pros. When they lose money like most new traders, they will lose all confidence and probably sell.

It’s possible that a return to normalcy could pull some of these retail traders out of the market. States opening could have the opposite effect you’d think it would on stocks. There’s also the buy the rumor sell the news trade. Everyone has known for weeks that states would reopen in April, May, and June. The good news is the re-openings aren’t causing a spike in new cases. However, stocks aren’t out of the woods because we still need to see how the economy rebounds this summer. Will it go from a depression to a recession or to an expansion? The other aspect is the potential for increased tensions with China. The tensions were kept at bay as America dealt with the crisis. When you see tensions rising it means COVID-19 is waning. However, it’s still terrible news for risk assets.

EPS estimates cratered this earnings season. They always fall during earnings season, but this was worse because of the shutdown. 391 of 479 S&P 500 firms reporting earnings had their Q2 estimates lowered after they reported. As of May 22nd, Q2 EPS growth was -43.9% which is down from -36.45% on May 1st. As we forecasted, this quarter won’t see net losses for S&P 500 non-GAAP EPS. Obviously, a +40% decline still isn’t good.

The good news is seen in the 3 charts above. They show the bottom up forward EPS consensus increased in the past week. Estimates increased for small, mid, and large caps. That’s the order of their recent performance. To be clear, small caps had a larger and deeper decline. The trend of weakness in smaller companies continues on the local level as most small businesses are in big trouble. Many restaurants and bars won’t be able to profitably open if they are forced to limit the number of customers they can have at a time. These businesses operate on thin margins which means for most of them, it makes sense to stay closed.

The stock market works based on uncertainty. Stocks bottomed as we started to see COVID-19 improve in Italy. The market didn’t trust China’s trajectory. Either China pursued policies few other countries did or the numbers weren’t true. The timing of the bottom isn’t shocking, but the size of the rally relative to the current situation is. This is the 3rd largest bear market rally ever, yet the unemployment rate hasn’t peaked yet, the economy isn’t fully reopened, there isn’t a cure or a vaccine for COVID-19, and we don’t know if it will come back in the fall. The stock market bottomed on March 9th, 2009 and the recession ended in June 2009. The stock market bottomed 2 weeks later this year. It’s highly unlikely the recession ends in June which means this reaction is quicker than the last one. More faith is being put in the Fed now even though it can solve a banking crisis better than it can deal with a pandemic.

The improvement in certainty, the rise of FOMO from retail traders, and the fiscal/monetary stimulus programs have all helped push the market higher. There’s also the rise in big tech firms which dominate the market. The 4 charts above contextualize the size of the stimulus programs. As the top right chart shows, government spending as a percentage of GDP is the highest since WWII. It’s much higher than the peak in the GCF. The fiscal stimulus as a percentage of GDP is on pace to be one of the largest in history. Plus, there is natural spending when the economy falters (unemployment benefits). The stock market’s reliance on fiscal stimulus means if the 2 parties don’t find solutions, stocks can plummet.

The Fed’s balance sheet as a percentage of GDP is about to be at a record high. More importantly, the Fed is buying more assets (municipal & corporate bonds) which makes this QE the most potent ever. Finally, the 3 month net change in central bank rates is showing the most cuts since the trough of the financial crisis. This all adds up to a big bear market rally.

The stimulus checks went into the stock market. That’s disconcerting for holders of names popular with retail traders. EPS estimates stopped falling as earnings season ended. This usually happens, but it’s a bigger deal now because the decline was so massive. The smaller the company, the bigger the decline. This has been the 3rd largest bear market rally partially because of the extreme fiscal and monetary stimulus programs.