Halfway Through The EPS Estimate Cuts 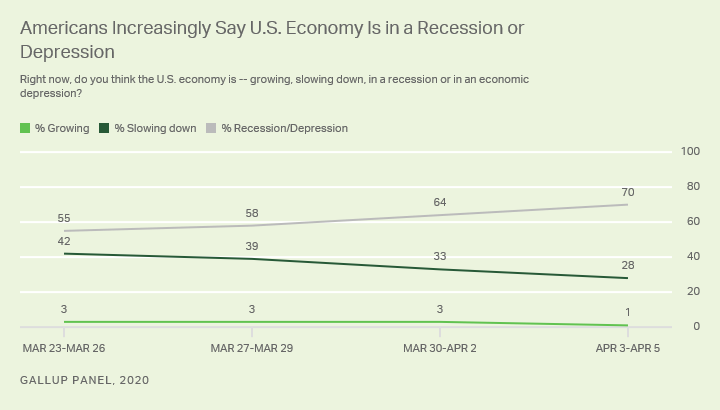 The Earnings Scout is a purveyor of S&P 500 earnings information. The firm stated at the start of the year, S&P 500 earnings were expected to be $178.96 and now they are expected to be $154.97 which doesn’t fully account for the shutdowns. The theme of this quarter’s earnings reports will be guidance and stock buyback suspensions. That’s what we heard from Starbucks on Wednesday evening. That’s not necessarily a death knell for stocks because it’s expected. To put that into crystal clear terms, Starbucks stock rose on Thursday and Costco fell even though Starbucks reported a 3% decline in U.S. same store sales and Costco reported a 12.1% gain in U.S. same store sales in March. That’s because the news was priced in.

The suspension of buybacks is bad news for EPS since there will be more shares outstanding than expected. The Earnings Scout believes if businesses can reopen by June, there will be $124 in S&P 500 EPS this year. That implies of the total potential $54.96 decline in EPS estimates, $23.99 has occurred. Slightly less than half of the decline in estimates has already happened. The coming accelerated decline in EPS estimates later this month isn’t reason enough to sell. For stocks to fall, there needs to be news that supports opening the economy later than the start of June.

According to healthdata.org, hospital resource use in America will peak on April 11th. There needs to be a decline in total active cases for a couple weeks before the economy opens. Italy hasn’t seen its active cases start to drop yet even though the number of new cases per day peaked on March 21st. That ended up almost perfectly coinciding with the bottom in the S&P 500 on March 23rd. There are reports Italy will reopen on May 4th. That process will have massive implications for the S&P 500 just like the peak in new cases per day did.

The first phase of the shutdown in the beginning to middle of March involved hoarding items sold at the supermarket. That has ended. Grocery stores have started to limit the sales of certain items. Plus, there’s no need to buy more of an item that you just purchased extra of. Consumers have a better understanding of the situation as panic buying ended. The chart on top shows the spike in spending in early March and the decline in the following weeks. Part of that spike includes work from home gear. Once you buy desks and computers to work from home, you don’t need to repeat that purchase. This trend caused Wayfair to preannounce that it would meet or beat its Q1 guidance for revenue growth and adjusted EBIDTA margins.

The bottom chart shows the spike and subsequent decline in grocery spending. The expected decline in April compared to March explains the decline in Costco stock. The firm benefits from work from home and food/necessities sales. There certainly will be more food purchased because restaurant sales will be lower, but that’s also temporary. The latest trend in sales explains why the Redbook same store sales growth rate in the week of April 4th fell 1% to 5.3%. That was the 2nd straight week of lower growth.

The Working Poor Are Getting Hit Hard

Those with low wage jobs or less education are getting hit the hardest in this recession as they usually do. As you can see from the chart below, job losses in March were felt almost exclusively by those with a high school degree or less.

The good news is many people who make low incomes will actually be making more by being unemployed because of the extra $600 per week the federal government is adding to unemployment insurance for 4 months. This help is why this recession won’t be as bad as the Great Depression for workers even if there is a massive decline in GDP in Q2. The latest update from UniCredit calls for a 10.8% decline in 2020 U.S. GDP.

In a survey from March 27th to March 29th, 20% of Americans stated they lost pay or income since March 1st. 15% were put on temporary leave and 12% were laid off. Oxford Economics estimates 27.9 million jobs will be lost from March to May which more than eliminates all the jobs that were created in the 11 year expansion. As of April 3rd, the 7 day trend in job postings was down 23.6%. As you can see from the bottom chart below, the 7 day trend of new job postings fell 49.3% from last year. The worst hit industry was hospitality and tourism which fell 56.8%. The next worst was childcare which fell 39.8%. Nursing saw a 15.9% decline even though COVID-19 is straining the healthcare system.

What a difference only 3 months makes. In late January, Gallup’s survey showed 74% of consumers were optimistic about their finances in the next year. That was the highest ever. We flagged that information in February. That wasn’t reason enough to sell stocks though because we needed a catalyst. The shutdowns caused by COVID-19 were that catalyst.

The subsequent job losses have caused almost the exact percentage that were optimistic in January to see a recession or a depression. As you can see from the chart below, 70% think the economy is in a recession/depression.

The good news is we don’t need a catalyst for the recession to end. America just needs to follow the procedures Italy has implemented to eventually reopen the economy in a few weeks or a couple months. The worst case scenario is this virus comes back later this year.

S&P 500 EPS estimates have only fallen about half the amount they will fall once the shutdowns are fully in the models. Earnings could be worse if the shutdowns last longer than until June. The hoarding has stopped which has lowered retail sales growth. The good news is workers, especially low skilled ones, are being helped greatly by unemployment insurance. There are barely any new job postings as you’d expect in a shutdown economy. Consumers see a recession just a few months after being the most optimistic they had been in decades.