Every China Bear Should Read This 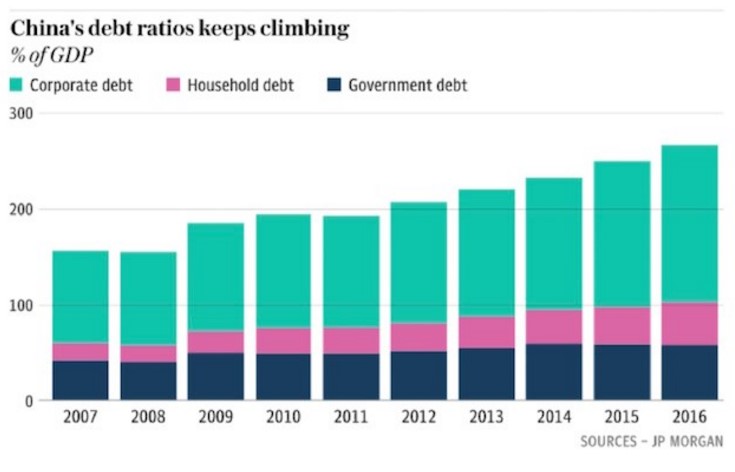 China Has A Lot Of Debt

You’ve probably heard the basic argument that China has too much debt which will cause its economy to inevitably collapse. The JP Morgan chart below shows the debt growth in action.

China is nearing a debt to GDP ratio of 300%. While that seems ominous, it might be overly simplistic analysis. Whenever, you see a thesis based on a widely known data point, it’s important to question why someone would take the other side of the trade. We’re not necessarily saying that this debt won’t be an issue in the long run, but we are saying there’s more to the story. There’s always a bull and a bear case to every asset. If you don’t know the bullish case, you shouldn’t be betting against China.

The best way to go bankrupt as a trader or an investor is to ignore the reasons why your trade can go wrong. You don’t need to necessarily harp on differing opinions, but you need to acknowledge them in an unbiased way. This is great to do because it will allow you to reverse your position if you see those taking the opposite side of the trade are being proven correct. The worst investors are those who can’t admit they were wrong. Investors should have a small ego and not care at all about being right. If you care more about being right than making money, you will have poor performance. Sometimes movement in a stock doesn’t make sense, but it’s not worth blowing up your portfolio to prove the market wrong. This is where discipline and diversification help avoid disasters.

Before we get into some of the bullish arguments on China, let’s check out the enormity of the debt China has taken on. As you can see in the chart on the left, excluding China, the global debt to GDP has declined since the recession.

When you include China, the debt to GDP ratio has increased. The chart on the right breaks down where the global debt has come from since December 2007. As you can see, China has dwarfed the increase in global government debt excluding the nation. These charts shouldn’t be ignored.

The biggest problem with calling China a bubble is the use of capitalist models to try to predict a planned/command economy. If China had the same type of credit cyclicality like western mostly-capitalist nations, it would be in trouble. However, the cyclicality of the Chinese economy has more to do with leadership changes than the credit markets. It’s not a capitalist system, so the same rules don’t apply.

Planned economies have pluses and minuses. The negative is that they don’t have free competition which inspires innovation. The positive is its government is more effective. A pesky democracy doesn’t stand in its way, so it can do as it pleases, such as planning out infrastructure programs, even if some roads and bridges lead nowhere. In the US, a government can plan a system and then the next government can knock it down, almost as if the parties care more about getting their projects and goals accomplished than the American people. It’s inefficient to constantly change healthcare programs. That’s why America is left with the mess that is Obamacare, and a potentially bigger mess that is offered up as a replacement for it.

We are taking an objective look at these economies to set the stage for the bull versus bear debate. It’s not an endorsement of planned economies by any means. One of the key factors which makes each economy more suitable for its country is the values of its people. In the US, individualism is valued. Americans love free speech and the ability to create new companies as well as promote new ideas. Therefore, a planned economy would be a disaster for the US. On the other hand, Confucianism is a popular ideology in China. It supports hierarchical thinking, collectivism, and submitting to the government. A fully capitalist economy won’t work in China unless the values of the people change. It’s much easier for the planned economy to work if the people obey orders.

One of the areas where China has gotten a bad rap in Austrian economic circles as well as the mainstream financial media is ghost cities. Ghost cities were cities built by the government which were empty because no one had moved in yet. Creation of new cities allows for the economy to expand without the old cities getting overcrowded. It was an eerie sight of how government policy can go wrong when they were empty. However, if you fast forward a few years, these cities are filling up. One example of this is Lingang New City. In 2013, the city was empty, making the city’s creation look like a waste of money. However, China has a long-term approach which is about 15-20 years. Through tax incentives and the government moving in to its commercial buildings, the city has gained life in the past few years, making it look like a real city. As was mentioned earlier, these types of projects end up working out because the Chinese population listens to the government.

One reason to take notice of the bull case for China is how great the recent economic reports have been. In the first half of 2017, GDP growth was 6.9%. In August, exports were up 5.5% and imports were up 13.3% in dollar terms. Industrial production for the first 7 months of the year was up 21.2%.  The excavating machinery part of the Chinese Construction Machinery Association said its excavator sales were up 111.1% in first 8 months of the year. As you can see from the Bloomberg chart, this has catalyzed the Yuan to strengthen versus the U.S. dollar in the past few months.

Yuan Is Strengthening Versus Dollar

It’s not a great idea to only focus on one side of an issue. You may be biased against the concept of a planned economy if you’re from the west. Your values shouldn’t get in the way of your investing strategy. In this article, we looked at why a planned economy suits China and how some of the doom and gloom narratives have been wrong. For example, some ghost cities have filled up. To be clear, the debt is still worrisome and it shouldn’t be ignored, but there is a lot of room to grow for the country.