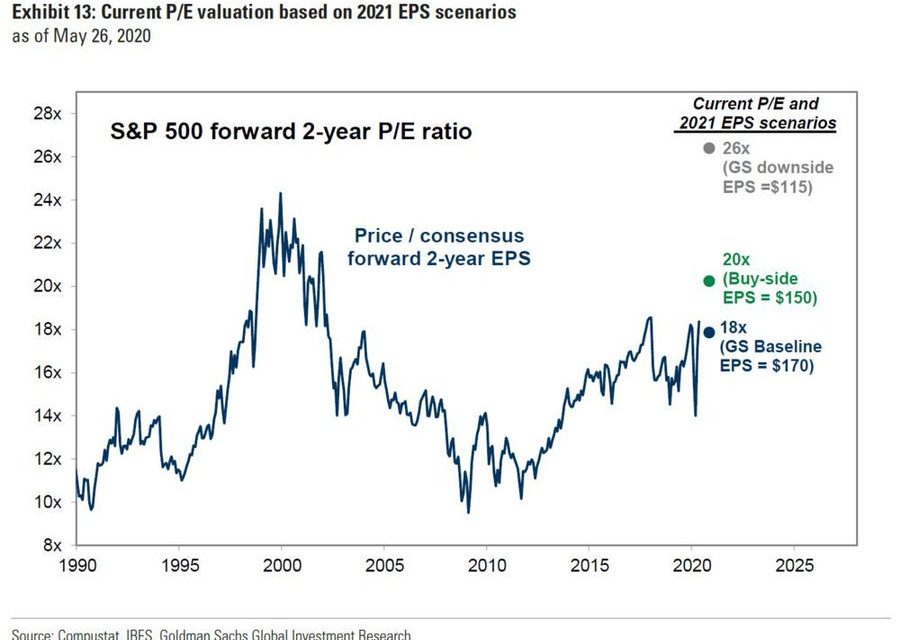 We rarely mention near term stock action unless it has been extreme. This market is the polar opposite of March. The financial media went from discussing a potential depression to discussing why stocks shouldn’t fall despite civil unrest and the highest unemployment rate since the Great Depression. Everyday, like clockwork, the S&P 500 futures market rises early in the AM. The cash session, which is the normal trading session maintains the gains. This is the opposite of March when futures would often limit down 5%. This is the opposite in every way because the size of the moves are smaller and much more consistent.

We must wait until Thursday to discuss the NAAIM exposure index. It was at 81.65 on May 27th which was the highest reading since before the crash. When it gets above 90, it’s a sell signal. We expect it to do that since stocks have rallied 4 days in a row. It’s completely wrong to say this is a hated rally. Sentiment and positioning were bearish in March, but that has changed. The criticisms are high, but actual investors are putting money to work. The chatter doesn’t matter. Only dollars matter. The S&P 500 is up 11 of the past 14 days. There is no question where the dollars are headed. Money is flooding into U.S. stocks as the put to call ratio recently fell to 0.46, the CNN fear and greed index hit 58 which is greed, and the net fund mangers’ positioning in U.S. stocks is over 25%.

The Market Is Expensive

Valuations don’t act as a catalyst, but they do matter. Stocks likely would have fallen this winter anyway because sentiment was so extreme and valuations were high. The NAAIM index in December hit 98.9 out of 100. There were several readings in the 90s as the market stayed overbought for longer than usual. Obviously, the uncertainty that COVID-19 brought amplified the decline in stocks. Somehow, the market is already back to being considered expensive even though the economy hasn’t come close to recovering.

As you can see from the chart above, the 2 year forward PE ratio is 18 based on Goldman Sachs’ baseline EPS estimate of $170. If you use the buy side EPS estimate of $150, the PE multiple is 20 which has only been surpassed by the late 1990s tech bubble in the past 30 years. On the one hand, earnings estimates have stopped falling sharply. From May 1st to May 29th Q2 EPS growth estimates fell from -36.45% to -44.23%. Estimates fell 26.2 points in April. They fall quicker during earnings season, but still the decline has moderated. On the other hand, uncertainty is still high. To act as if the economy is going to rebound with any worries is foolish. There is uncertainty because of the riots, fiscal policy, monetary policy, trade, and the 2020 election. There is less uncertainty than 2 months ago because of advancements in the understanding of COVID-19, but you are paying handsomely for that knowledge as stocks are dramatically higher.

Q2 GDP growth is going to be bad. However, it won’t be as bad as the Atlanta Fed’s Nowcast of -52.8% because the May and June data will improve; they haven’t been added to the estimate yet. However, it will still be terrible as the consensus is for -35% growth.  In the week of May 30th, the Redbook same store sales growth reading fell from -5.5% to -7.2%. The stock market is ignoring all the bad news. It’s very wrong to say every bad news event is priced in. In February COVID-19 wasn’t priced in until it was. The May BLS consensus expects there to be 7.725 million job losses; it sees the unemployment rate spiking from 14.7% to 19.8%. The labor force participation rate is expected to fall 0.2% to 60%. (However, keep in mind the ADP report just wildly beat expectations, so these BLS estimates could be too bearish).

The current difference between Main Street and Wall Street is giant. While stocks almost recovered all their losses in a few months, the chart below shows the quarterly economic output lost isn’t expected to be regained until 2029. The current consensus is a Nike swoosh like recovery. Economists have finally strayed from using alphabet letters to describe recoveries. The recovery in stocks was a clear V.

Riots Come At A Bad Time

The riots have come at the worst possible time for the economy. Small businesses that were barely surviving were dealt a death blow when their stores were looted and destroyed. Municipal governments were already in need of a bailout. Now they need to spend more on security because of the protests. Illinois became the first state to borrow from the Fed’s $500 billion loan program. The state is about to borrow $1.2 billion from the Fed to deal with the delay in taxes being paid. The Fed is charging a 3.82% rate. The state might become the first one to have its bond rating cut to junk.

As you can see from the chart below, cities and towns are facing budget problems.

Considering the extremely low interest rates the federal government can borrow at, it only makes sense to bail out the weakest states and cities. Most cities are in trouble as 88% are experiencing a revenue shortfall, 52% have cut spending on public safety, and 27% have laid off workers. Cutting public safety right as national riots are going on is a disaster waiting to happen.

U.S. stocks are doing really well as investors have completely forgotten about risk and valuations temporarily. This isn’t a hated rally. Fund managers are actively participating in it along with retail traders (like never before). The market is almost back to its February peak even though the recovery in lost GDP might not come for another 9 years. Just as the economy was reopening and states and cities were facing budget problems, the riots have come. They are destroying small firms and hurting cities’ budgets which were in trouble before they started. States need help from the Fed. Bailouts and ratings cuts could be coming.