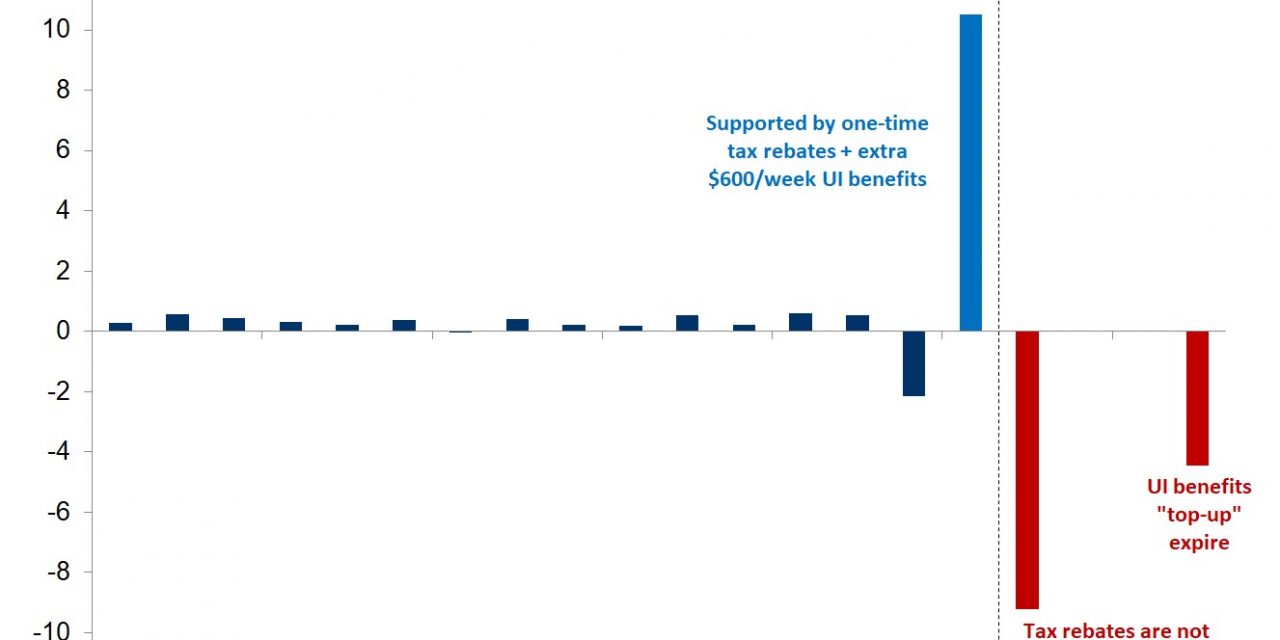 On the one hand, the consumer had deleveraged this past economic cycle. However, many people were still hurting. The bottom 50% which don’t own stocks are mostly struggling. In the recent expansion there was much less bad housing debt compared to the prior cycle. The 2000s was probably the worst period for consumers’ balance sheets ever. The last cycle showed great strides near the end when there was full employment and low inflation. Even still, people were struggling.

The chart above shows a survey before this recession which details the financial health of Americans. As you can see, 15% of Americans were financially vulnerable. This category is reached if a person reports healthy outcomes in none or few of the 8 indicators. 55% were financially coping which means they gave better answers in the survey. Just 28% of Americans were financially stable. That’s horrible. The best scores were those 65 or older which had an average of 75. Those with less than a high school diploma got a 50 and those with a college degree got a 74. Similarly, those making $30,000 or less had a 51 and those making 6 figures or more had a 77.

As we discussed in our article on the April PCE report, income growth hit a record high. The chart below details how that happened in nominal terms. It’s no surprise proprietor’s income and compensation were huge negatives because the economy was shut down and there was double digit unemployment. The $1,200 one-time benefit was a major positive for households. If a household had 2 adults and 2 children, it received $3,400.

The U.S. benefits package has been wildly criticized for its scope and effectiveness because that generates attention and people are hurting. On the one hand, the speed at which the checks were given out and the handling of unemployment claims was poor. It’s no surprise that occurred because this is a unique period in history where there was extreme demand for unemployment insurance. Plus, with PUAs, a new category of claims was filed. However, the size of the package was solid.

Obviously, it seems like the rich made out well with the stock market rising, but the government certainly helped those who needed it. Remember, 68% of people got paid more from unemployment benefits than they did from working. Adding in the $1,200 and $500 checks also helped. The question is obviously, what’s to come because these benefits are rolling off and people might not be getting their jobs back quickly enough. We will discuss that next. First, let’s look at the chart below which supports the prior point about the ineffectiveness of unemployment benefits going out. As you can see, 1/3rd of unemployment insurance and PUA benefits have yet to be paid. This needs to happen soon. Remember, many people weren’t in good financial shape before this recession.

The stock market rallied 11 times in 14 days based on the notion that this recovery is in the bag.  Stocks did so well that there was a rotation into cyclicals like industrials, while healthcare and cloud stocks never sold off even though they outperformed when investors didn’t see a return to normal soon. It must seem very great to own a cloud stock after that major run. Sure, some have underperformed, but they never sold off on the notion that the economy is going back to normal even though the cyclicals rallied on that premise. This market is ignoring risk and going up on hope.

The stock market either assumes everyone will get their jobs back soon or that the government will pass another stimulus package. As of today, consumers are faced with a cliff. As you can see from the chart below, there is about to be a -9% impact on incomes if the tax rebates aren’t renewed.

There is about to be a -5% impact if the extra $600 in unemployment benefits per week aren’t renewed. The GOP doesn’t want to renew them. To be clear, compensation growth will be strong on a monthly basis this spring and yearly growth will get less bad as people get their jobs back. However, the labor market won’t be close to fully recovered by August. Considering the fact that stocks have sold off for comparatively silly issues like the debt ceiling, it’s amazing that stocks are assuming this will work out fine.

Many consumers were in bad shape before the recession hit. The government helped consumers so much in April that income growth hit a record high. That being said, the payouts of benefits have been delayed. A consumer benefit cliff is coming if Congress doesn’t act. It seems unlikely that most people will get their jobs back by the end of July.