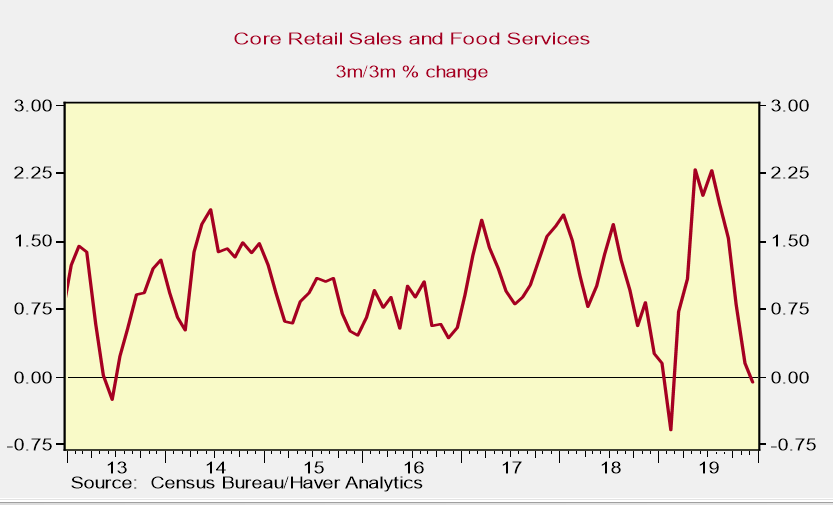 Whether the December retail sales report is good or bad depends on your vantage point. Growth differs dramatically depending on the time horizon you use because of comps. There were also countervailing metrics versus expectations as data points that beat estimates had previous results revised lower and vice versa.

Before we get to the details of the report, the best way to summarize it is to review its impact on GDP growth estimates. Oxford Economics lowered its Q4 GDP growth estimate to 2.2% from 2.4%. That doesn’t sound like a bad quarter at face value, but 1.3% of growth is related to trade. That’s not solely an indictment on consumption growth. There should be other weak categories. The Atlanta Fed GDP Nowcast lowered its estimate from 2.3% to 1.8% because the retail sales report caused its estimate for real personal consumption growth to fall from 2.3% to 1.6%.

The Countervailing Aspects Of The Report

After reading the details of this report, you will probably come away with the fact that most of the details counteract, making the effort not worth it. However, it’s better to know the details than get tricked by charts one way or the other. Monthly retail sales growth mostly beat estimates, but October and November’s growth were revised lower, so it wasn’t a great report.

Headline monthly retail sales growth was 0.3% which missed estimates by 0.1%, but November’s growth was revised down a tick to 0.3%. The other categories were the reverse. Retail sales less autos growth was 0.7% which beat estimates by 0.2%, but November’s growth was revised lower by a tick to 0%. You shouldn’t be surprised that motor vehicles and parts had weak sales growth because the December motor vehicle sales report showed 16.7 million vehicles were sold which fell from 17.1 million. It had a 3.9% yearly decline.

Excluding autos and gas had 0.5% growth which beat estimates by a tick, but November’s results were revised lower by 2 ticks to -0.2% growth. Finally, the all-important control group had 0.5% growth which beat estimates for 0.4%. However, November’s growth fell 0.2% to -0.1%. Besides estimates being confusing, growth is confusing because quarterly growth was very weak, but yearly growth was very strong. Quarterly results had very tough comps and yearly results had the easiest comps of the cycle. Quarterly (headline) retail sales growth was -0.3% annualized which was the first decline since Q2 2013. However, Q2 and Q3 annualized growth averaged 7% which was an impossible to continue trend. There should be a rebound next quarter.

Breakdown Of Where Sales Came From

As we mentioned earlier, motor vehicle sales brought down this report. It has a weighting of 20.14%, making it the biggest category within retail sales. Yearly motor vehicle and parts growth fell from 6.62% to 4.06%. That’s in a report where headline yearly growth improved sharply. The driver of growth was non-store retailers. Even Target, which is thought to be one of the leading brick and mortar stores, couldn’t muster up strong retail sales growth. Target’s same store sales growth was 1.4% this holiday shopping season which was down from 5.7%. Q4 estimates were 3.8%.

Online stores continue to take share quickly. Non-store sales growth was 19.2% which was the highest growth since December 2000. It was helped by the 1% comp last December. Even still, a 20.2% 2 year growth stack is nothing to ignore. As you can see from the chart below, non-store retailers excluding fuel dealers have 11.19% market share in all of retail. That’s almost up to general merchandise’s share of 11.33%.

Total non-store share is 12.63%, making it the 2nd biggest category. Frankly, this category should be broken up because you can buy anything and everything online. Yearly general merchandise sales growth was 2.25% which was the highest growth since April 2019.

The 19+ year high in the Bloomberg Consumer Comfort reading in the first week of January was surpassed in the latest reading from the week of January 12th. As you can see from the chart below, the index was up from 65.1 to 66 which was the highest since October 2000. Maybe Q1 quarterly annualized retail sales growth will improve sharply. This was its 8th increase in 9 weeks. American’s opinion of the economy was the highest since early 2001. This is good for Trump’s re-election chances.

Comfort on personal finances was the highest since mid-September. That’s despite the decrease in real wage growth in November and December. The buying climate index hit 58 which is its 2nd highest reading ever. The current headline reading is 4.8 points higher than the 2019 average. Married adults had the most confidence ever (data starts in mid-1990). Confidence in the Midwest was the highest since September 2000 even though manufacturing is in a mini-recession.

The retail sales report mostly beat estimates, but previous readings were revised lower. Yearly growth was strong, but quarterly growth was weak. The best summary is to say the 2 year growth stacks fell slightly and estimates for real Q4 consumption growth fell decently. Q4 GDP growth will still be good because of trade. We are still awaiting the trade data from December. The Bloomberg Consumer Comfort index has been amazingly strong in January as it has been mimicking this amazing bull market in stocks.