Will Stocks Be Disappointed With The 2020 Economy? 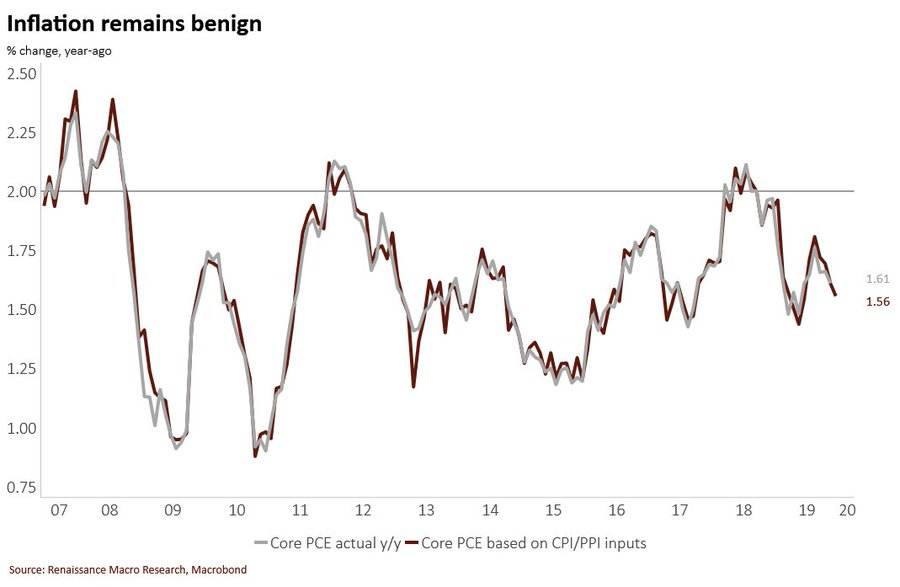 Just like headline CPI, headline PPI increased. It was up from 1.1% to 1.3% which met estimates. On the other hand, core PPI fell from 1.3% to 1.1% which missed estimates for 1.4%. That was the lowest rate since August 2016. Finally, core PPI excluding trade services was 1.5% which increased 0.2%. Clearly, trade services suppressed inflation. We mainly look at PPI to get an idea of what PCE inflation will look like. We care about inflation that affects consumers. Plus, the Fed’s favorite inflation metric is core PCE. Because the PCE report comes out so late, it rarely beats or misses estimates by a large margin. We already have a good idea where core PCE inflation will be based on the PPI and CPI reports.

As you can see from the chart below, based on PPI and CPI data, December core PCE inflation will fall to 1.56%. This harkens back to the point we made in the article on the CPI report. The Fed is more likely to cut rates because inflation is low than it is to hike them because inflation is high.

Core PCE inflation hasn’t been above 2% for most of this cycle. The Fed wants to see sustained inflation at 2%. It has failed at achieving that goal. This environment with low inflation and low unemployment has mostly worked out for consumers this cycle. Average real wage growth for the cycle will likely be one of the highest out of any cycle since the start of the 20th century.

What Does The Market Have Priced In?

The chart below is interesting because in a previous article we discussed how the S&P 500’s forward PE multiple implies optimism about the economy and stocks. Since economists were expecting 1.8% GDP growth in 2020, we stated there was a mismatch with the stock market which has rallied higher ever since Christmas Eve 2018.

As you can see from the chart above, Goldman Sachs has calculated a different estimate of what the market has priced in. Economists expect about 1.8% GDP growth like we mentioned, but Goldman believes the market expects similar results. This comes down to which market you’re looking at. We think Goldman is using the bond market to show expectations for GDP growth, but that doesn’t mean the stock market sees the same thing. The stock market suggests profit growth will be much higher than it was in 2019. This allows us to still make the point that equity investors would be disappointed with below 2% GDP growth in 2020.

As you can see from the chart below, the NFIB small business confidence index fell 2 points to 102.7 in December. While that missed estimates for 104.4 and the low end of the census range of 103.5, it was still near the high end of the historical range. 6 segments in the report fell, 2 rose, and 2 stayed the same.

We find the ‘earnings trends’ data point to be confusing, but ultimately the changes might be the result of statistical noise. Specifically, the net percentage of firms with higher actual earnings in the past 3 months compared to the prior 3 months fell from 2% to -8%. To be clear, 2% was one of the highest readings ever. You would expect earnings to be weak in 2019 because of high wage inflation. S&P 600 (small caps) margins and earnings contracted more than that of S&P 500 firms. We’ve noticed small cap stocks underperforming as large cap tech names take over. To be clear, small cap stocks are still bigger than the firms in the NFIB survey, but the trend of small caps doing worse is important. In December, we saw a big decline in wage inflation, but for some reason the earnings trends index fell 10 points.

The Fed’s Beige Book, which tracked economic activity in November and December, stated the economy expanded at a modest pace, but growth was limited by trade policy. The Beige Book stated, “In many districts, tariffs and trade uncertainty continued to weigh on some businesses.” The good news is Phase 1 of the trade deal was signed. The table below shows the targets for U.S. exports to China over the next 2 years.

The CPI and PPI reports imply core PCE inflation will decrease. The bond market shows investors don’t see above 2% GDP growth in 2020. However, the explosive rally in stocks in the past 13 months suggests equity investors see economic growth accelerating. The small business optimism index was solid as it fell 2 points. The earnings trends category fell 10 points which was odd. That being said, it was very high in November. The Beige Book said economic growth was hurt by the trade war. Phase 1 of the trade deal was made, so firms will have less to worry about in 2020. However, the Fed mentioned, business’s concerns won’t be completely gone until Phase 2 of the deal is signed.