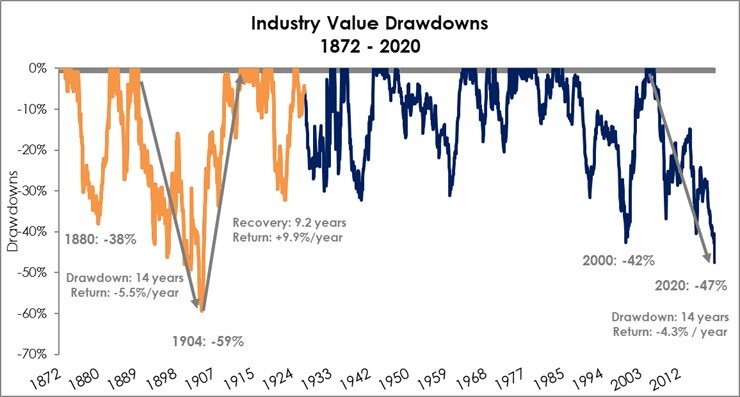 Historically, the only time the market has viewed good economic news as bad news is when the Fed was expected to tighten monetary policy. This is a unique scenario though, so you must be open to various possibilities. It is possible a cyclical recovery leads to a decline in the S&P 500 because it is so levered to the growth and big internet names that have been leading it for years. Cyclical stocks are not large enough to make up for potential declines in the growth names.

If you consider the stock market to be the Russell 2000, then the market might not fall as the financial sector is its largest component. To be clear, a strong economy doesn’t hurt the FAAMNG stocks. Obviously, if consumers have money to spend and are confident, it will help Apple sell more iPhones. The issue is the tech stocks are a play on low interest rates. Secondly, even though many tech stocks haven’t done better than normal because of the new COVID-19 related policies, they have gotten investor capital because they have outperformed.

One of the biggest problems with momentum investing in these names is traders believe they don’t have risk. Secular growth stocks might be better than cyclical stocks because of less reliance on the economy. However, growth stock prices rely on low interest rates. Secondly, secular growing tech stocks outperformed how they would normally in a recession because the economy was pushed online. Of course, there’s the obvious point that when no one sees risk, it’s time to look for it.

It’s often said that value stocks have never done this poorly versus growth stocks, but if you go back to the late 1800s and early 1900s, you can see a similar path. To be clear, this measurement of value is going long the cheapest third of the market and going short the most expensive third. Some investors believe there are no opportunities in this market because the S&P 500 is near its record high. However, they aren’t looking in the right places. After value fell 59% in the late 1800s and early 1900s, it earned 9.99% above the risk free rate for 9 years and then 17.8% per year for 7 years. The cloud companies are getting all the investor credit and none is going to the ‘old economy’ companies that are implementing this software and saving money.

Obviously, for the market to turn away from growth stocks, the real economic growth needs to increase. That has always been the elephant in the room for the past 6 years in which the FAAMNG stocks have exploded. Unlike the momentum stocks which are seeing extreme euphoria, treasuries are mostly taken as a given. It’s assumed rates will stay low. However, when these mega cap companies see higher valuations and lower growth rates because of their size, they rely on low rates even more which makes them hyper sensitive to a shift in rates.

We need a cyclical recovery to shift yields higher. Some growth bulls claim the Fed wouldn’t let long term rates increase. Firstly, the Fed can’t control long rates. Secondly, it’s actively trying to get rates higher as it wants inflation and growth to increase. These euphoric speculators think the Fed is on their side, but it is actively working against them. As you can see from the chart above, some of the economy is rebounding. The 13 week average of the trucking market demand index has increased.

As you can see from the chart below, the 7 day average of the TSA checkpoints measuring traveler throughput has increased. This is a direct negative for tech and a positive for industrials as people shift back to using planes to fly. To be clear, flying is still down severely (about 70% year over year). However, once the market sees a trend, it latches onto it. Flying doesn’t need to get back to normal to push cyclical stocks up. Instead investors need to believe flying will get back to normal within the next 24 months to start getting more aggressive on stocks such as airlines.

Either there needs to be a better treatment for COVID-19 or a vaccine to get people back to complete normalcy. Once the 2nd wave ends, we will still be left in a hybrid scenario like we were in June where cases weren’t a huge issue, but people didn’t want to take certain risks like gathering in crowds like at sporting events or concerts. The chart below shows various GDP rebound scenarios based on the timing of a potential vaccine. It’s possible the combined effect of better treatment, more masks, and a vaccine that some people get will eliminate the risk to the point where most people will fly again.

Schools will be opening in certain areas in August and September. Specifically, 52% will be virtual, 19% will be virtual and in person, and 25% will be exclusively in person. It will be critical to limit the spread of COVID-19 once they open for them to stay open. There won’t be a vaccine or treatment in time for the school year which begins in 1-4 weeks depending on where you live.

The past expansion saw women make more gains in the labor market than ever. They are being hit particularly hard by this pandemic because they are more likely to be taking care of children. As you can see from the chart below, prime age women are much more likely to not be in the labor force because of child care problems and family responsibilities. Those issues were ratcheted up in the COVID-19 outbreak.

The world was dramatically different in the late 1800s and the early 1900s, but don’t think there weren’t new technologies worth speculating on. There always has been a hot new thing. Even if software companies are better business models (competition & margins) than cyclicals, the relative valuation is off kilter. Most metrics show the economy stalled in the first half of July, but since rebounded as COVID-19 cases peaked. The timing of treatments and vaccines will tell us when the economy can go back to normal. Women were hit the hardest by the pandemic because traditionally they take care of family responsibilities and children more often than men do.