President Trump made a bold official promise of 4% GDP growth per year:

“To get the economy back on track, President Trump has outlined a bold plan to create 25 million new American jobs in the next decade and return to 4 percent annual economic growth,” reads the White House website.

However, despite the promise, in the near term, the economy looks to be barely growing at all. This article shouldn’t be construed as criticism of the president as it will have no bias towards or against him. It’s an analysis of what drives economies and how the recent economy looks as well as a discussion of whether 4% growth is in fact attainable.

The chart below shows the population trend of the working age demographic in the United States as well as those in the labor force. 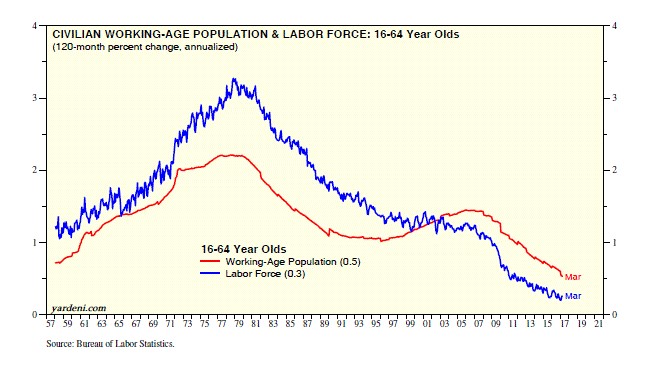 An aging population hurts productivity growth as an older workforce may be less efficient. In addition, purchasing habits change, therefore reducing demand for certain sectors of the economy. For instance, elderly people living on a fixed income budget are less likely to purchase a home or a car.

President Trump’s goal is to cut regulations to boost productivity growth, as he has stipulated on multiple occasions. While it is the correct approach as certain regulations may hinder new business formation, this may be easier said than done.

The chart below shows potential GDP growth as computed by the Congressional Budget Office. 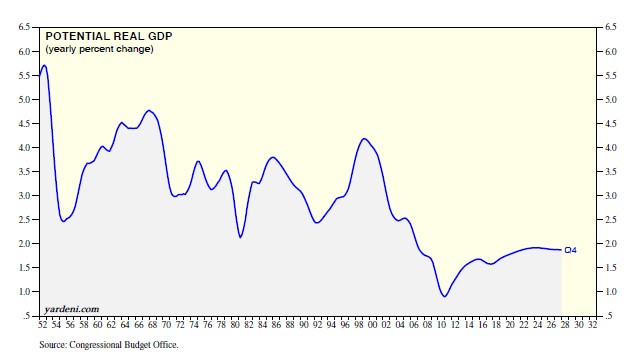 One final point on regulations is that they are enacted in a cyclical manner. When the economy is coming out of a recession there is usually a push for more regulations as the people want to prevent another crisis from occurring. Regulations cannot outlaw recessions, which makes it a fruitless task. Usually the next bubble in the economy won’t be the same as the last one anyway because investors and credit issuers feel burned from past mistakes. This is exemplified by how it took until 2015 for the Nasdaq index to reach the record high it set in 2000. It’s also shown in how mortgage debt hasn’t reached the prior cycle’s high. When the economy is at the end of the growth cycle, regulations are relaxed as people forget about the prior recession. Policy makers see signs of deceleration in growth and act to cut regulations to boost growth. When the economy falls into a recession, the regulation cuts are blamed even though the real cause is unsustainable credit expansion.

The near-term outlook of economic growth is weak. Trump’s first quarter as president having below 1% growth is not a step towards 4% growth, although quarter one (Q1) economic growth has little to do with his policies. The debate over what Q1 growth will be is centered on the difference between ‘soft’ survey data and ‘hard’ economic reports. After the election, businesses and consumers became more optimistic about the economy because of the increased likelihood of tax cuts, regulation cuts, and infrastructure stimulus. This is what drove the increase in sentiment surveys and the increase in the stock market which is the ultimate arbiter for the consensus on where the economy is headed.

The real economic data has been weak which shows that although small business CEOs are optimistic about the future, they aren’t investing in new plants and equipment. This weak hard data will mean the economy will grow slowly in Q1 as sentiment has no role in the GDP report. The difference in hard and soft data is played out in the two Fed models which predict economic growth.

In an ironic twist of fate, the NY Fed actually did an analysis which proves that small business sentiment is useless in predicting economic growth. This nullifies the NY Fed model’s forecast.

The charts below show the results of how businesses performed in terms of revenues, profits, and employment. Reality is bumpy while the projections are consistently positive. This shows small business sentiment is meaningless. The NY Fed proved that the Atlanta Fed’s 0.6% GDP forecast for Q1 is more likely to occur than its own model which projects 2.8% growth.