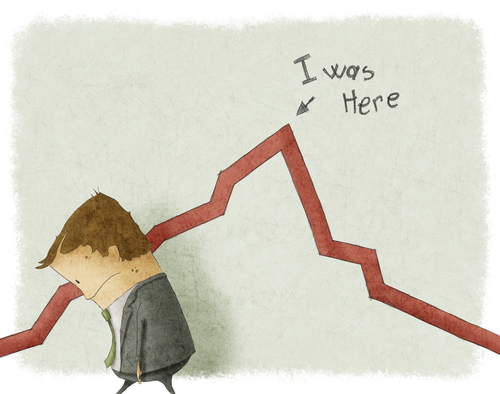 While the economy and earnings usually catalyze crashes in the stock market, this cycle is unique because the bubble is in stocks as a whole, not a sector of the economy. It’s different from the 1990s tech bubble, because this appreciation is broad based, opposed to the 1990s when speculation was rampant in just tech stocks. The speculation in tech stocks is like the speculation we are seeing in 2017 in the cryptocurrency space where traders buy into a business which have no chance of making profits. They buy betting on the greater fool theory when a speculator hopes someone is will pay a higher price than he/she did. The hope springs eternal as due diligence has been thrown out the window. The most basic question businesses should be able to answer is “why should this exist?” It’s a pivotal question because if you’re basing your investment on hope instead of revenues, then you should at least be able to prove why it needs to exist.

The quote below is an example of a poor explanation of the use of blockchain technology which is a popular buzzword currently. 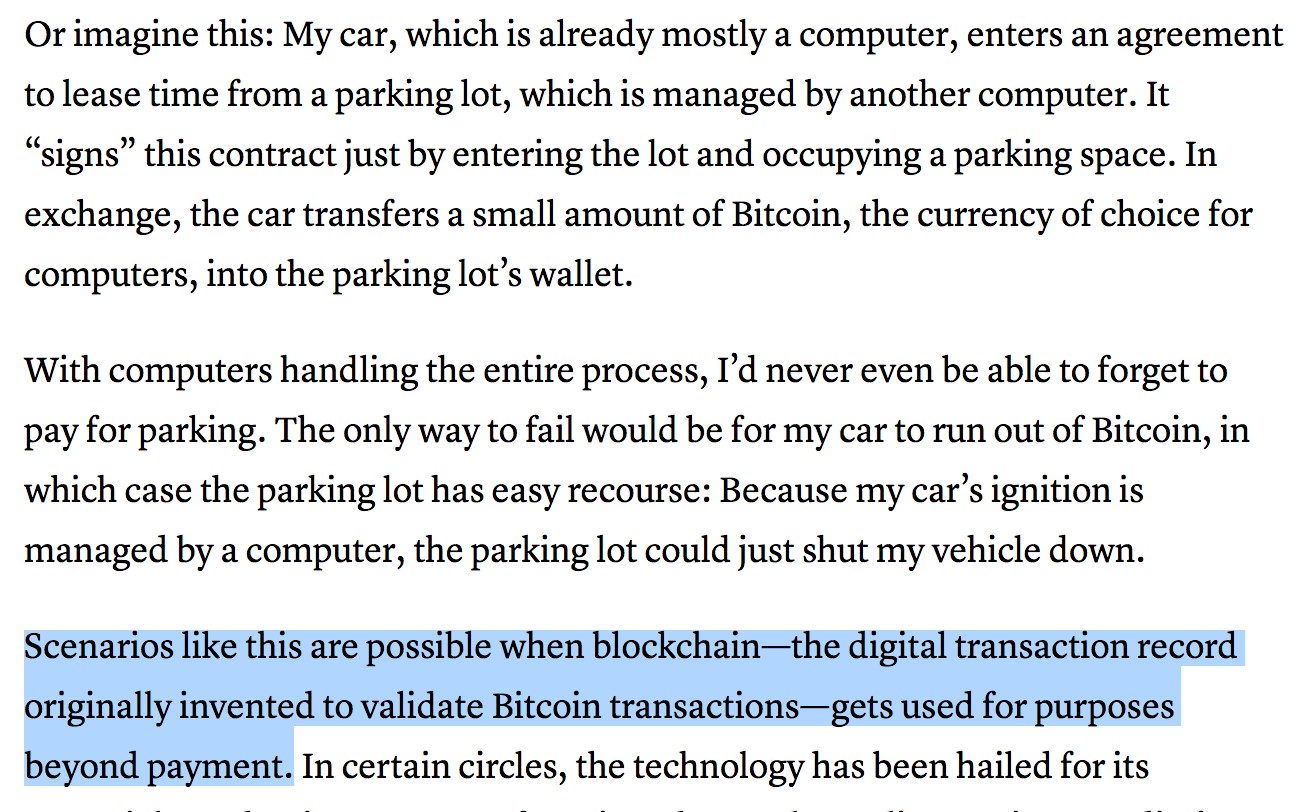 People want to believe in something which isn’t true, so journalists and businesses give them what they desire. They live in the fantasy until the businesses fail or greater fools stop paying more for these businesses. The explanation of why blockchain is so great for car parking ignore the fact that toll tags are used without blockchain making the technology not necessary in this case. Many cryptocurrency startups are reinventing businesses that already exist, slapping buzzwords like “blockchain” and “decentralized” in the marketing materials, and expect speculation to bid up their firms to ridiculously overpriced valuations

The speculation in cryptocurrencies is akin to that of the technology sector in the late 1990s. What stops speculative crazes isn’t the fundamentals, unless there’s a failure. Instead what stops the crazes is when the speculation ends. This is different from how stocks usually act because they’re supposed to be investments based on the strength of the economy and corporations. What makes this environment different is the explicit wanting of stocks to move higher by central banks. Instead of improving economic growth, smoke and mirrors have been set up to make the stock market make the economy look better than it is. As you can see from the chart below, the real GDP growth rate per capita is the lowest out of any business cycle since the 1950s. Economic growth is moribund, yet speculation in stocks is making it look like the economy is healthy. This is the power of central banks.

Real GDP Growth Per Capita Is Weak This Cycle

The point is that because stocks have been largely boosted by central bank actions such as quantitative easing, pushing investors up the risk curve and creating a positive feedback loop with the illusion of prosperity, this has forced people into having more confidence in the economy. Subsequently, if the reverse were to happen, namely less stock market stimulus from central banks, this could result in the undoing of speculative buying frenzy, shattering with it confidence and resulting in an economic downturn. This is the reflexivity theory. This theory, promoted by George Soros, shows how stocks cause the economy to act in certain ways instead of being a depiction of how the economy is doing. Positivity in financial markets can cause the economy to improve, while falling stocks can cause a recession as stocks become the ultimate leading indicator. The best shot for this theory to prove true would be in today’s market where stocks are more important to keeping the house of cards up than ever before.

To bring the conversation full circle, this concept rings true for cryptocurrencies as more investors will invest in startups in the industry when the prices of the digital currencies are rising than falling. Most of these firms have businesses which aren’t directly affected by the price changes, but that doesn’t stop the speculation in prices from boosting optimism about the industry. This reflexivity theory is why start-ups conducting initial coin offerings care deeply about the price of cryptocurrencies like Bitcoin and Ethereum. If the price is up, it signals the party is still going. If the theory remains consistent with stocks, a significant decline in valuation could cause an economic recession.

Therefore, we focus on asset prices. We try to spot clues as to when the party will end. As you can see from the chart below, the asset volatility index, which includes 11 asset classes, is showing near the lowest level of volatility in the past 22 years. It shows how all assets are becoming high correlated as the stock market speculation has caused volatility to crash. This chart supports the theory of reflexivity given the fact that the positive environment has effected all assets such as fixed income and real estate. 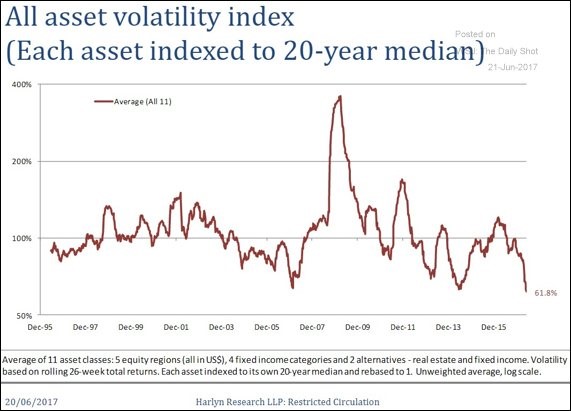 All Asset Volatility Is Very Low

The chart below shows the speculation in stocks which could be the tail which is waving the dog (asset prices & the economy). The chart shows the volatility of the Russell 2000 small-cap index is at the 2nd lowest ever. Keep in mind, the Russell 2000 hasn’t seen the profit growth the S&P 500 has seen because its mainly affected by domestic economic results. It speaks volumes about the US economy, since most of the companies on this index  don’t have much international exposure and are witnessing declining profit margins. 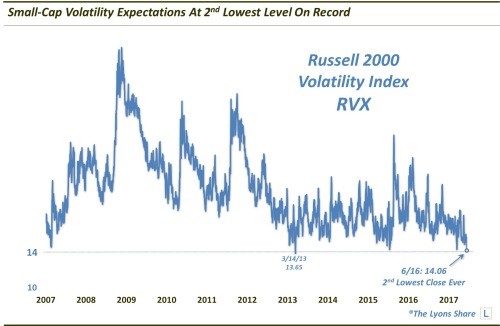 More evidence of this speculation reaching a fever pitch is seen in the chart below. (GWIM stands for “Global Wealth and Investment Management” and AUM stands for “Assets Under Management.”). The percentage of cash in wealth management portfolios is only 10.7% which is near the trough seen in April 2015 and below the trough seen in the speculation prior to the 2008 financial crisis. 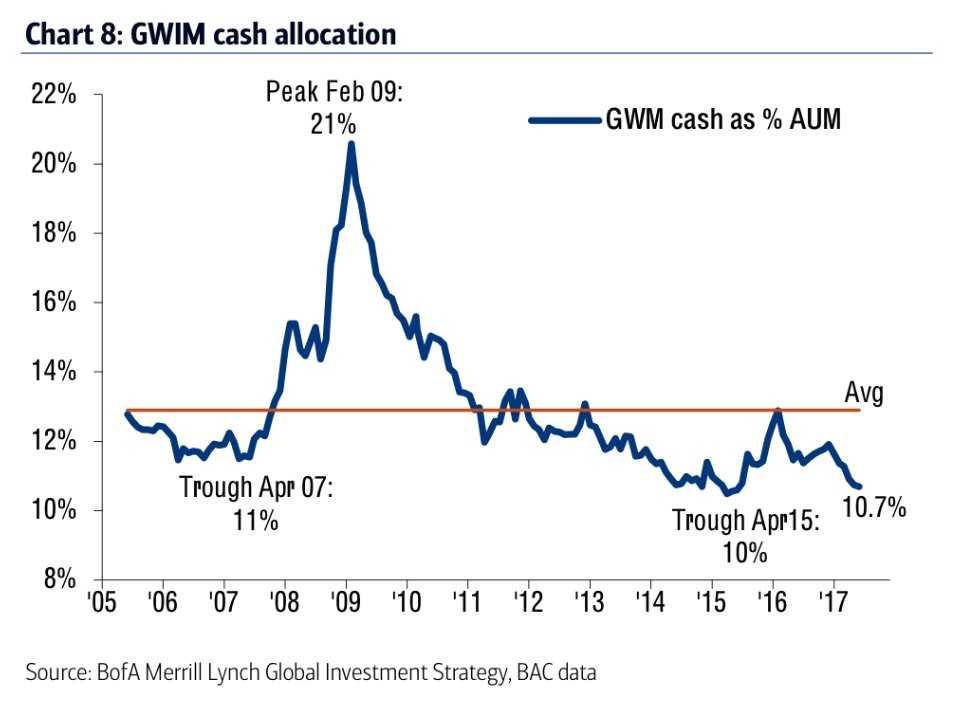 The final chart shows the euphoria in the market by comparing the S&P 500’s price to earnings multiple to the VIX. The stock market speculation is near the level seen in the early 1990s. In theory, it can’t get much more bubblish than this. 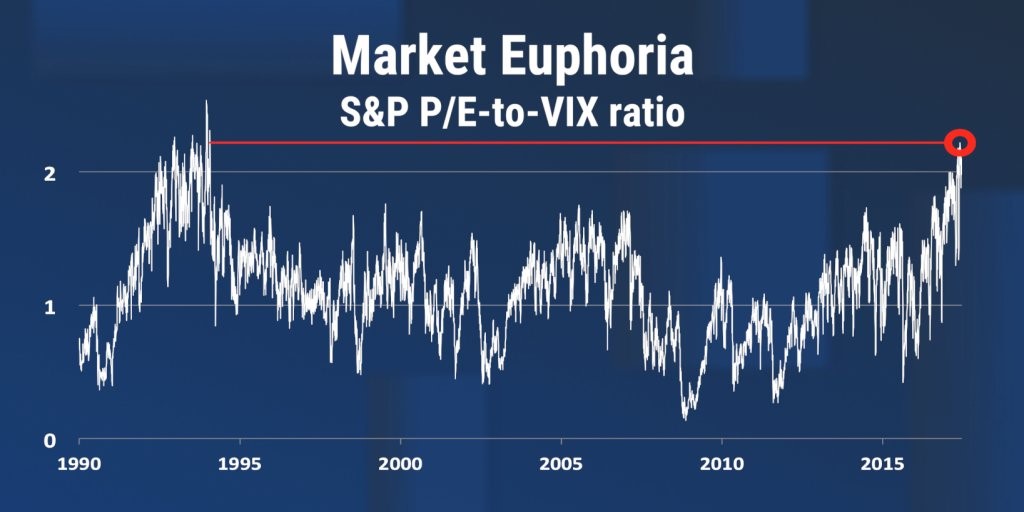 It’s important to not get complacent because the economy isn’t showing signs of cratering. The tail can wag the dog in some instances as a stock market crash could cause a recession instead of the other way around. If that is possible, it’s important to follow the speculation level in the market to see when it may reach its boiling point. Throughout 2017, volatility has reached record lows, valuations are high, and cash levels are low. This high speculation has already led to the correlation of multiple assets classes causing their volatility measures to plummet. If stocks can do that, then expecting them to impact the economy isn’t out of the question. At the very least, this article should show you how the theory of reflexivity applies to parabolic growth industries like the cryptocurrency one which will surely see declines in investment activity into startups if the price of bitcoin and ethereum falls.