Buy These Stocks If You Think A Vaccine Is Coming 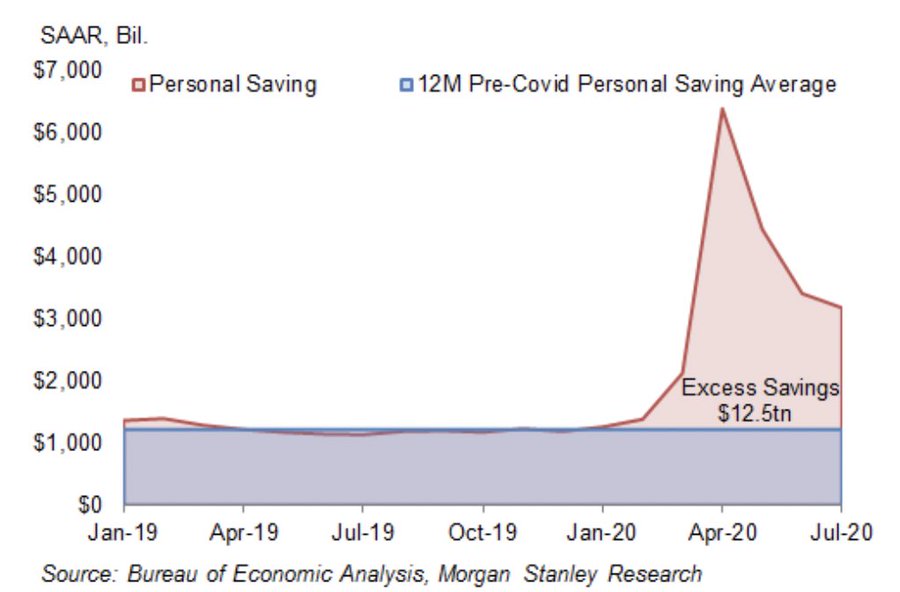 Morgan Stanley believes there is a twofold negative scenario about to play out with more COVID-19 cases this fall/winter combined with consumers running out of savings with no stimulus to save them. We think if COVID-19 gets worse, the odds of a stimulus will increase. That’s not to say, more cases wouldn’t be a negative. It’s just a matter of understanding what’s likely. Regardless of what happens, by next year there will probably be a stimulus of some sort as whichever party wins is going to want to jump-start the economy. This is why business cycles are often correlated with election cycles.

As you can see from the chart above, there is currently $12.5 trillion in excess savings, but that money is evaporating. Morgan Stanley isn’t considering the ultimate positive which is more people getting jobs. We should see another solid jobs report next Friday since initial claims and continued claims have been falling. We had a solid initial claims reading in the BLS survey week. Remember, there were 1.371 million jobs added last month and the unemployment rate plummeted to 8.4%.

It seems like March was many years ago. If you remember, the stock market actually bottomed before COVID-19 got really bad in America in April. Many credit the Fed with causing the bottom, but that oversimplifies the situation. Investors gained confidence once Italy’s new cases per day started to peak. It lowered the uncertainty for America’s situation. Uncertainty is increasing again in spite of the nice decline in the average deaths per day in America and a near new low in hospitalizations since the pandemic started.

That’s because the chart below shows Spain, Israel, and France with increasing positive test rates. America’s positive rate has been falling since the peak in July. The question is if America already had its 2nd wave or if another one is coming. We’re starting to see some lockdowns in Spain and Israel. It would be a disaster if cases spiked in America again. The bright side is America is on the precipice of rapid mass testing in October which should limit the spread of the virus.

You probably intuitively know the COVID-19 trade. When there is optimism about the virus going away because of lower new cases per day, a breakthrough in treatments or a vaccine, and improvements in testing technology, the leisure and hospitality firms do well along with firms that benefit from people going back to work in person. On the other hand, the companies that make technology in the work from home and online shopping industries do well when negativity on COVID-19 increases.

The chart below shows this trade in detail. As you’d expect, value stocks rally when optimism on vaccines increases and growth does the worst when optimism wanes. Remember, we have a 3 pronged approach. It’s not just vaccines. It’s also about better treatment and slowing the spread through rapid testing.

COVID-19 created a record breaking market because we were already coming off of a long period of growth outperforming value. The exact stocks that had been doing well are the least hurt/helped the most by this new economy. They are in the tech and healthcare sectors. The winners were pushed into hyperbolic mode. That’s usually the symbol of the end of a trend. This would be like if energy stocks have been doing well for 5 years and then a war in the middle east created even higher oil prices which sent energy stocks to the moon. We have low rates and demand for technology was pulled forward. It became the perfect few months for momentum tech.

In the past decade, growth stocks are up 278% while value stocks are only up 87%. This situation is partially related to crowding as value had been a very crowded trade in the previous decade. Now growth has been the winner. Never forget the cyclicality of this situation. Some mistakenly think growth will indefinitely beat value because of innovation. More capital begets more competition. There might be so much factor movement this summer because of bets on value to finally do well.

As you can see from the chart below, the rolling 120 month excess performance of companies with high free cash flow yields minus firms with low free cash flow yields has gone negative. It’s by far the worst since at least 1951. Huge bets can shift the market for a few days like we’ve seen this summer. However, the major phase change hasn’t happened yet. It might take higher yields to get us there. The current 67 basis point 10 year yield isn’t close to what’s necessary to get this reversal going. That being said, it always looks the worst before weak sectors bottom.

Investors aren’t worried about the result of the election. It’s tough to see a huge negative coming since we already know the possibilities at hand. How can Trump or Biden winning shock the market? That’s why the volatility futures show more concern with after the election than before it. Polling and the odds of who will win the election don’t matter.

Instead investors are worried about the smooth implementation of the election given the massive influx in mail-in ballots. The big fear is a contested election or some other drawn out process that takes weeks or months and creates uncertainty and unrest. For a little while, it was cheap to hedge after the election. Now investors are fully concerned about how the election will go and it’s becoming expensive to hedge against losses in November.

The consumer’s savings hoard is dwindling. The key is to keep job creation high to increase income so that a stimulus isn’t needed. We might be getting one anyway next year as the winning party will want to boost economic momentum to improve its popularity. The pandemic is getting worse in Europe which is bad for value stocks. Value stocks and high free cash flow stocks have been underperforming for years. We might need higher interest rates and higher economic growth to switch the trend. Investors aren’t worried about who wins the election. They are worried about the implementation of the election as mail-in ballots could create a controversy.