Consumer Confidence Was Impacted By This Coming Event 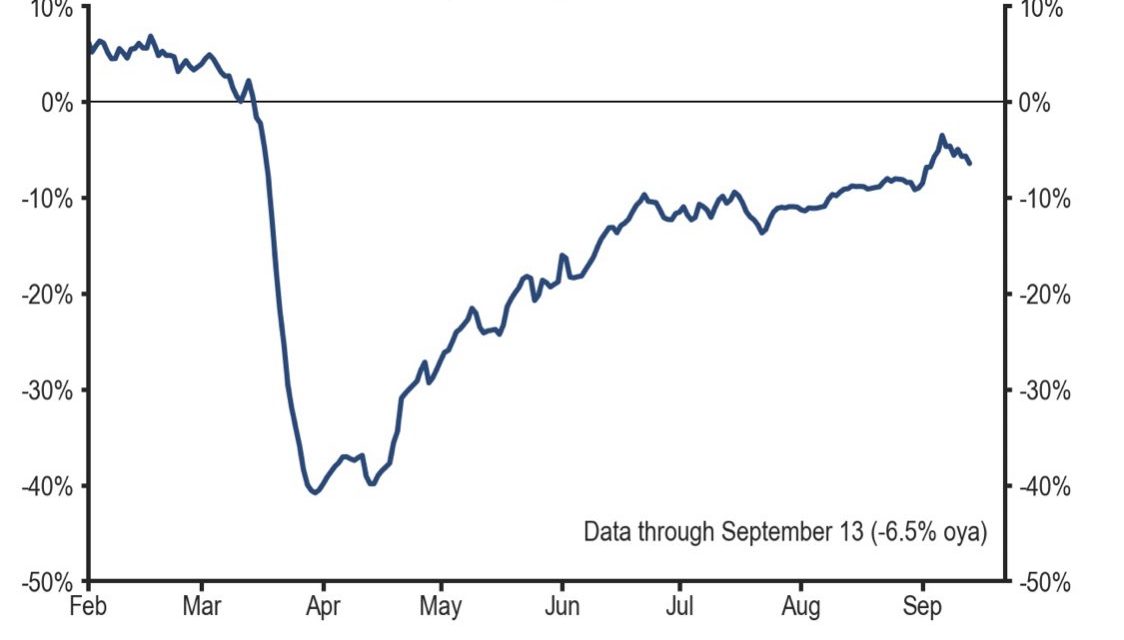 There was a modest decline in the 2nd week in September in flights and consumer spending. You can’t look too much into non-seasonally adjusted data because the first week of the month was helped by the Labor Day holiday. Some people flew more in early September; then the yearly growth went back to its prior range. That’s to be expected until fast testing becomes universally available later this fall.

As you can see from the chart below, Chase card spending was down 6.5% in the week of September 13th which is a little worse than the prior week. Usually, we don’t look at this type of data because it’s noisy. Noise becomes less important when there are massive shifts in spending like we saw after the virus hit. At that point, data from the prior month was too late in detecting changes. We might be transitioning back to business as usual soon (in terms of what data we look at). That being said, as long as you know seasonality isn’t included in the chart below, it’s fine to look at.

We think some investment banks are biased towards coming up with a negative narrative on the economy when they say the data is rolling over. They want to come up with a reason why the stock market is falling. We can tell you for sure that the stock market didn’t fall because people spent less money in the week after Labor Day like they always do. This chart includes yearly growth, but Labor Day was 5 days later this year than last year.

Going against the chase spending data and supporting the solid Bloomberg consumer comfort reading, the University of Michigan consumer sentiment index rose from 74.1 to 78.1 which is still a 15.3% decline from last year. Yearly declines are still to be expected. It’s interesting how much lower confidence is in relation to retail sales which has more than fully recovered its recession losses. That differential is related to the fiscal stimulus. Getting money from the government doesn’t inspire as much confidence as jobs coming back and businesses reopening do. As you can see from the chart below, the current conditions index rose from 82.9 to 87.5. That’s important because the expectations index was impacted by politics with the election in a couple months.

The expectations index rose from 68.5 to 73.3 as it is only down 12.1% yearly. Interestingly, Democrats became more confident because they see the possibility of Trump leaving office. Republicans became less confident because Trump might lose. It’s not that consumers think he will lose. As you can see from the chart below, it’s a tie between who they think will win. It’s that there was no chance of him leaving 6 months ago (other than impeachment) and now there is hope/fear that he can be voted out. If the Dems and the GOP cancel out in this survey, it’s a good thing because it means confidence improved. It should have improved given the decline in continued jobless claims and in COVID-19 deaths per day in the past month.

We don’t think the stock market is having a major impact on confidence like it usually does. That’s based on the weak confidence in the summer despite the rise in stocks. If you talk to consumers, they think the stock market doesn’t reflect the current economy since so many people are still in trouble. That’s anecdotal evidence, but it’s logical. Corporate profits aren’t in tune with small businesses. In fact, as small businesses close, big corporations gobble up the market share.

The chart above also shows, consumers think Trump is better for the economy and finances. That’s a good sign for Trump because the economy is usually an important issue. On average, Biden is winning in battle ground states by 3.9% in the polls. There is no point in us giving any commentary on the race until the debates occur.

If you follow the stock market vaguely, you might think it’s obvious value stocks were due for a major reversal versus growth. If you follow the market every day, it’s painstaking to call for value to outperform growth because there have been a few head fakes this year. As you can see from the chart below, September has been significant as the Russell value index is outperforming the Russell growth index by more than 5% for the first time since the tech bubble crash in 2000. This chart mimics the bubble quiet well.

It’s amazing how badly tech has done versus value when you consider the fact that the 10 year yield is still only at 70 basis points. Imagine how much growth would fall if rates actually rose. Secondly, the market isn’t yet pricing in the economy going back to normal. You can see with Zoom stock’s rally that traders see the COVID-19 economy lasting a few more months or maybe forever if they think working from home will stick even when it’s safe to go back to the office.

Why Is Software Down?

Why tech is selling off if investors don’t think COVID-19 is on the precipice of going away and rates haven’t increased? It’s selling off because it was dramatically overvalued. Better scenarios than were possible were priced in. As you an see from the chart below, the global software forward PE ratio is about 180% above the market’s forward PE. That’s way above the average bubble and approaches the 2000 peak. The Snowflake IPO and others are helping to push software lower because of the added supply. The frantic demand for tech stocks can’t soak up this much supply.

Card spending growth fell because of Labor Day. That’s the same with air travel which is back to about 1/3rd of where it was last year. Consumer sentiment improved in September. Consumers are looking forward to the election. We don’t like when consumers change their opinions on the economy based on the election because that’s a partisan opinion rather than telling us what they actually think of their job prospects. Value is doing well in September. Software stocks were priced to the moon in August. It didn’t even take a reopening of the economy and higher rates to cause them to correct.