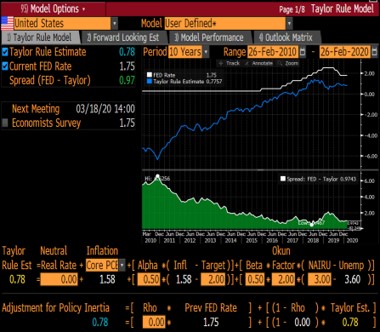 Even though it seems like this latest panic is being used as an excuse to cut rates, there is economic support for lower rates since core PCE inflation is still below the Fed’s 2% target. The chart below shows the Taylor Rule estimate of the Fed funds rate if the NAIRU unemployment rate is 3%. That means the unemployment rate that causes inflation to rise is 3%. We’ve already seen higher services inflation, but commodities prices have been hurt so badly that we haven’t seen strong headline or core inflation. The unemployment rate has fallen below the Fed’s projections from earlier in the cycle, so it’s not impossible for the rate to fall further. This analysis shows the Fed funds rate is 3 notches too high. That’s exactly in line with the futures market.

Even if the NAIRU is 3.5% which is just 0.1% above the current rate, the Fed funds rate is 1 notch too high. It seems clear, that the Fed went a bit too hawkish in 2018 in response to the fiscal stimulus. Any analysis of the fiscal stimulus needs to include this negative catalyst to growth. We’re not saying the tax cut was the best policy, but we are saying that global growth had started to slow in 2018 and the Fed hiked rates quickly. We can never know what the U.S. GDP growth rate in 2018 would have been if the Fed wasn’t hiking and global growth was stable or accelerating. It probably would have been an amazing year.

The Housing Market Is On Fire

The housing market is doing much better than the rest of the economy. That makes sense because rates are near their record low. The average 30 year fixed mortgage rate fell to 3.45% in the week of February 27th.

National home price growth in the Case Shiller index increased from 3.5% to 3.8% in December. Growth bottomed in August 2019 at 3.1%. Phoenix had the highest growth rate again as it rose from 5.9% to 6.5% which was its highest growth since last February. San Francisco price growth jumped from 0.5% to 2%. Chicago had the joint lowest price growth with New York as both were at about 1%. Similarly, the FHFA home price index showed growth increased from 5% to 5.2%. Higher price growth motivates builders to build new homes. It helps that raw materials prices are low too. The CRB core commodity index is down 12.2% year to date.

The MBA purchase applications index in the week of February 21st had 10% yearly growth which is consistent with its growth in 2020. We’ve seen comments on Twitter that say a recession is coming even though the housing market is strong. They say the next recession won’t be caused by housing. However, new home sales have led other cycles besides the last one. As you can see in the chart below, the recession bars occur after declines. The big outlier is the 2001 recession because that was in the midst of the runup in housing. The making of the bubble started in the 1990s. If the housing market had a real downturn in 2001, the 2008 crisis could have been avoided.

Specifically, new home sales in December were revised up from 694,000 to 708,000. In January, new home sales were 764,000 which was a cycle high. It was the highest sales since July 2007. This beat the consensus estimate of 710,000 and the highest estimate on Wall Street which was 727,000. Housing was helped by the warm weather in December and January. Even without the warm weather, in February we’ve seen strong applications growth. Yearly new home sales growth was 7.9%. The 3 month average is 721,000 which is 19% growth from last year.

As you can see from the chart below, the ratio of existing home sales to new home sales has been falling in the past few years. It’s approaching the ratio it was at before the housing bubble burst. There is limited supply of existing homes as inventory on a monthly sales basis is very low. That creates demand for new homes if they are built in the low end of the market. Remember, existing homes are cheaper than new homes.

The Fed might be justified in cutting rates 3 times like the market suggests if the NAIRU is 3%. The housing market is doing really well compared to the rest of the economy as GDP growth is expected to be weak. Normally, you don’t see recessions after new home sales hit a cycle high. The exception is the 2001 recession which was when the housing bubble was in its infancy. The coronavirus will shave 0.5% to 0.8% off 2020 Chinese GDP growth and 0.2% off US GDP growth if estimates are correct.