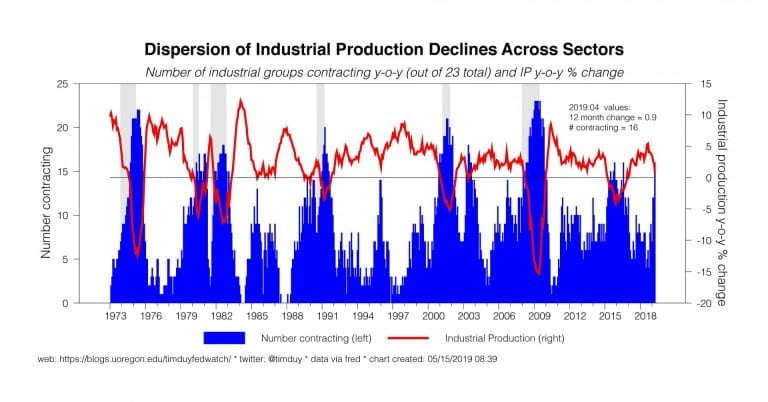 After the weak April retail sales and industrial production reports, the estimates for GDP growth fell. We only have one month of hard data which hasn’t been adjusted, so it’s far from certain what Q2 GDP growth will be. The GDP Nowcasts tell us what growth would be if only this data was included. They give us the pace the economy would be growing at if May and June were like April. The results aren’t kind as the Atlanta Fed Nowcast only expects 1.2% growth.

Just like how the retail sales report was weak because of the adjustment due to the late Easter, there was a quirk in the industrial production calculation. Before we get to that, let’s look at the gruesome numbers as is. Production growth was -0.5% monthly which missed estimates for 0%. Yearly growth was only 0.9% which was the lowest growth rate since February 2017. Historically, when yearly growth is negative, it means a recession is likely. The major exception was in 2015-2016. It will be interesting to see if the economy avoids a recession when the manufacturing sector contracts again to determine if the diversification away from manufacturing makes it more recession resistant. Obviously, that’s not a thesis the bulls want to test any time soon.

As you can see from the chart below, 16 out of 23 industrial groups are contracting which is the same level as the peak in the last industrial production recession.

Overall growth is much higher though after it troughed at -4.1% in December 2015. Only 30% of industrial production groups are expanding. A drop below 40% has previously meant widespread weakness that implies a recession.

Manufacturing doesn’t look great either as monthly growth of -0.5% was 0.4% below the low end of the consensus range. Also, yearly growth was 0%. Therefore, the capacity to utilization rate fell from 78.5% to 77.9%. The economy isn’t near running out of slack. One of the weakest categories was autos which is consistent with weak auto sales and the increase in delinquency rates on auto loans. Motor vehicle and parts production was down 2.6% monthly and 4.4% yearly.

The chart below shows why this weakness might be a quirk in the data.

Monthly manufacturing output growth has almost always been below its 6 month average when the 15th is after the payroll survey week and 22 working days. This calendar issue has a strong track record. Let’s see if results bounce back in May. They might bounce back regardless of this because the May Empire Fed and Philly Fed indexes were strong.

As you can see from the chart below, most of the recent housing data has been beating estimates.

Some of the data is objectively good while other reports are less bad than expected. In April, purchase applications for newly built homes increased 15.6% yearly. The MBA reports were solid in April, signaling an improvement in the housing market after a terrible end to last year. The applications index in the week of May 10th showed weekly purchase application growth was -1% and yearly growth was 7.7%.

The May Housing market index, which measures home builder sentiment, was very solid. It increased from 63 to 66 which beat estimates for 64. Anything above 50 means growth. This index hit a 7 month high. It has taken a few months to regain the losses made late last year. The present sales and 6 month leading sales indexes had very strong readings of 72. However, the traffic index still showed declines as it was at 49. The decline was less bad. As you can see from the chart below, the Northeast’s reading was historically high at 65; it is the highest reading since May 2005. The South was at 67, the West was at 74, and the Midwest was at 56.

In keeping with the theme of housing data beating estimates, housing starts and permits beat estimates. However, both showed negative yearly growth, so this was one of the less bad reports. Specifically, April starts were 1.235 million which beat estimates for 1.2 million and rose from 1.168 million. Permits were 1.296 million which beat estimates for 1.29 million and last month’s reading of 1.288 million. Yearly starts and permits were down 2.5% and 5%. Single family data was the weakest. It’s tough to get excited about the housing market if permits are down yearly as permits are a leading indicator of activity. The good news is this report caused the Atlanta Fed GDP Nowcast’s estimate for Q2 real residential investment growth to increase from -5.4% to -3.6%. This reading has been negative (in the official GDP report) for 5 straight quarters.

The industrial production report signaled a recession could be coming. The two things that can save the economy is that it is well-diversified and that this report may have been week because of a calendar quirk. Most of the housing data has been beating estimates, but we can’t be extremely excited about a market where single family permits fell 4.2% monthly and overall permits fell 5% yearly. That’s even with declining interest rates.