What Are Leading Indicators Stating About US Households? 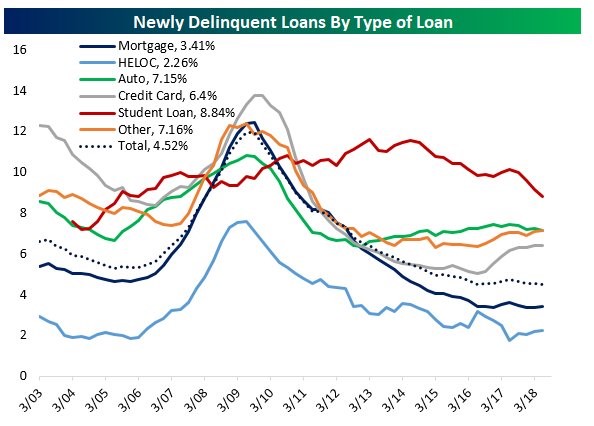 Investors wondering about when this expansion will end are missing the point of how bad the 2008 recession was. We discussed this topic in Is 2008 Financial Crisis A Reason To Be Bullish About Future? It has taken 9 years to recover from that disaster and there is still improvement to be had. The NY Fed’s Q2 household debt report gives us a glimpse at how the consumer is doing now that the expansion has gone on for 9 years. The approximate 50% of consumers who own stocks are also helped by the fact that this is about to be the longest bull market in US history.

The results won’t shock you as there has been continued improvement for households and total debt has increased. To be clear, record debt doesn’t mean record leverage because nominal wages are up and wealth is at a record high as it is burgeoned by the rally in stocks. Household occupants own stocks and real estate, so they have done well. In fact, household leverage is no where near 2008 levels. Owning commodities has been bad this cycle, which is good news for consumers because they are the end users.

Whenever these reports come out, there are always bearish investors following their recency bias claiming that the consumer never learned their mistakes and there is another debt bubble. If you don’t read the details of the report and just see that total household debt increased for the 16th straight quarter, as you can see from the chart below, it’s easy to think that.

Specifically, household debt was up 0.6% or $82 billion to $13.29 trillion. The total is only $618 billion above the previous peak. We say only because that’s not a lot when you adjust for CPI. If the debt would have just increased at the rate of CPI, it would be $14.84 trillion. Nominal wages are increasing, so you can’t expect debt to fall. The big reason this expansion has been so long is debt actually fell in the first few years of it. The debt troughed in Q2 2013 and is up 19.2% since then. It’s fair to say the recovery started in Q2 2013, making this expansion only 5 years old.

Housing is in much better shape than the previous cycle as there is very little chance it is the center of another crisis. Mortgage debt increased $60 billion to $9 trillion and home equity lines of credit fell $4 billion to $432 billion. The median credit score of mortgage borrowers is 760, showing that only well qualified borrowers are buying homes. This explains why the 90+ day delinquency rate for mortgages fell from 1.2% to 1.1% and HELOC delinquencies remained low (up from 1.5% to 1.6%). Mortgage delinquencies troughed at 0.9% in the previous cycle, meaning the recovery is almost complete.

Student debt has become the biggest portion of this category. It was flat from last quarter at $1.41 trillion, but on a year over year basis, growth increased from 5.6% to 5.8%. Auto loans were up $9 billion to $1.24 trillion. It is in a 6 year uptrend. That doesn’t make up for the fact that delinquencies on auto loans are elevated. The good news is they fell in Q2 from 4.3% to 4.2%. That was the first decline since Q1 2015 which potentially signals a recovery could be coming. Delinquencies shouldn’t be high because labor market is much fuller than has been at any other point in this cycle. Credit card debt increased $14 billion, which was an increase of 1.7%.

The overall delinquency rate is low because mortgages are the largest portion and they have low delinquency rates. The chart below shows the 90+ day delinquency rates for each category. This chart explains why non-housing debt is the biggest problem for households. The student loan delinquency rate was up from 10.7% to 10.9%. This rate is elevated, showing the legacy problem of expensive college tuition which hurts graduates even in a strong labor market. Credit card delinquency rates are relatively low as they fell from 8% to 7.9%.

You can say the chart above is a leading index for the NY Fed chart. The most noticeable difference is the sharp decline in the rate for student loans as it has fallen to 8.84%. It looks like the chart which shows year over year growth in student loans. Slowing student loan growth and a falling newly delinquent rate means the millennial generation is finally starting to recover and is ready to be a major force in the housing market in the next couple of years.

Student Loans Are Still An Issue

The student loan problem is going from a crisis to very bad, meaning there is still a lot of room for improvement. 38% of student loans from the entrants in 2003-2004 are expected to be defaulted on by 2023. As you can see from the CNBC chart below, the cost of forbearing on a loan for $39,000 at an interest rate of 5.7% is high. The interest keeps ticking once you start paying the loan back.

Households are in mostly good shape because mortgage debt hasn’t gotten out of hand like last cycle. Slowing student loan debt growth means the next generation may not face the same problems millennials did. Millennial student debt isn’t gone, it just looks better because the labor market is extremely strong. The default rate could rise to catastrophic levels even in a mild recession.