48% Of Jobs From Recession Recovered 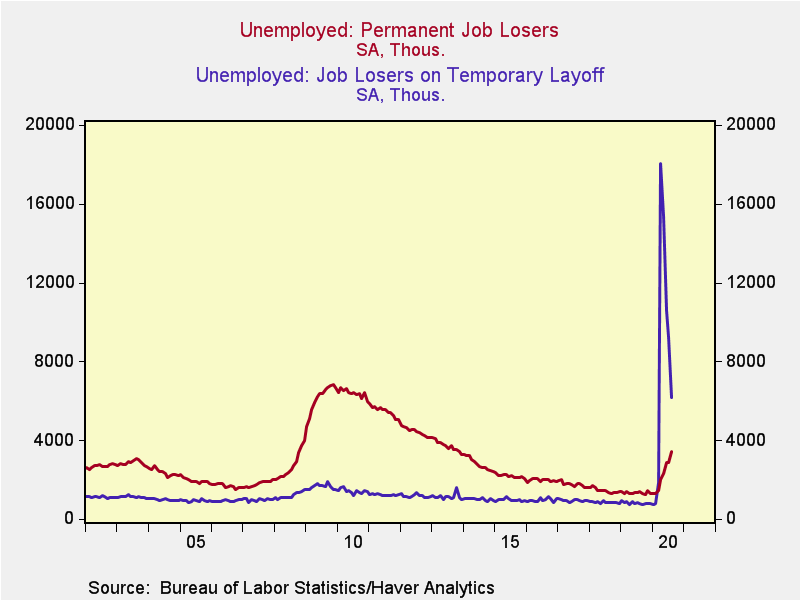 The August BLS labor report bested the ADP report by a lot just like it has since the recovery started. As you can see from the chart below, there were 1.371 million jobs added which was less than last month which added 1.734 million and slightly missed the consensus of 1.4 million.

Each month, there are fewer people temporarily laid off which means there will likely be fewer jobs added. Remember, the stock market’s decline on Friday doesn’t mean this was a bad report. Tech stocks fall when interest rates rise. In other words, a good report is bad for tech stocks which have driven the market this year. You can tell this was a good report because the 10 year yield rose 8.3 basis points to 0.721%. If there is a bigger increase in yields, tech stocks will fall much further than they recently have.

If you add up the job creation in the past 4 months, 48% of the jobs lost in the recession have been recovered. Sure, the labor market isn’t in an ideal situation, but this recovery is much better than most people expected in April. It lowers the odds of a stimulus being passed, but that’s not an issue if people are working. It might help President Trump’s chances of re-election if the momentum continues. It would really help if Abbott’s new test causes another increase in economic activity.

The unemployment rate cratered because the household survey showed employment rose 3.8 million. The payrolls survey counts jobs; people with more than one job get counted more than once. Household employment just counts the number of adults with any job. The household survey is smaller and has had a lower response rate because of COVID-19. Also, keep in mind the real unemployment rate was 0.7% higher because of the people misclassified as “employed but absent from work.” The underemployment rate fell 2.3% to 14.2% which means there were 0.5% fewer people marginally attached to the workforce. As you can see from the chart above, there are still 7.5 million people working part time involuntarily which is much above the expansion trough of about 4 million.

The weakest part of this report was that government led job creation due to the census (temporary employment). The government created 344,000 jobs. Even though everyone knew there was a census, the consensus oddly had the government only creating 42,000 which means private sector job creation missed estimates solidly. There were 1.027 million private sector jobs added which missed estimates for 1.358 million. It still more than doubled the ADP reading.

The 2nd best industry was retail which added 248,900 jobs. COVID-19 doesn’t spread much in retail stores as compared to group indoor gatherings. With stores reopening, it’s no surprise these jobs came back. Information added 15,000 jobs which was above ADP’s reading of -1,000. That’s critical to wage growth because these jobs pay the best. Leisure and hospitality created 174,000 jobs. That’s good, but there is a long way to go to get it back to normal.

As you can see from the chart above, leisure and hospitality employment is 25% below its pre-recession level which is the worst out of any industry by far. This industry would have the most to gain from Abbott’s new test allowing the economy to get back to normal. Construction lost much fewer jobs than in the last recession because that recession was based on housing while housing has been strong this year. Overall employment is down 8% from before the recession.

There are scary headlines/tweets that say the percentage of temporary layoffs is down and the percentage of permanent layoffs is up. That’s not a big deal. Eventually, almost all the layoffs will be permanent because the temporary layoffs will either switch to permanent or people will get their jobs back. The goal is to have as many people get their jobs back as possible.

As you can see from the chart above, temporary job losers fell from 9.225 million to 6.16 million. That’s about how many jobs can be created in the next few months if the recovery goes very smoothly and COVID-19 is put at bay. In a worse/more realistic situation, some will be permanent. Permanent losers rose from 2.877 million to 3.411 million. There were 6.818 million permanent job losers after the last recession. The long term impacts of the current recession still aren’t known until permanent job losses stop rising. As a percent of the population, permanent losers is lower than the peak in 2003. The 2001 recession was considered mild. In the best case scenario, the 2020 recession could have less of a long term impact.

Wage growth rises in recessions because people getting paid the least lose their jobs, so the average goes up. People aren’t actually getting big raises. With the unemployment rate falling, wage growth is starting to matter again. Average yearly growth stayed at 4.7%. The work week length rose 0.1 to 34.6 hours. That helped weekly wage growth to stay at 5.3% which is very strong since inflation has been low.

The August labor report was very strong. It lowered the chance of a stimulus, but it also lowered the need for one. The situation is still very uncertain. If COVID-19 were to mutate and spread this winter, we could have a double dip recession. If Abbott’s new test limits the spread, allowing people to go back to life like it was before the virus, most of the people temporarily laid off can go back to work which would mean the long term impact of the recession on the labor market would be smaller than the 2001 recession (which was a small one).