20 Steps To A Recession 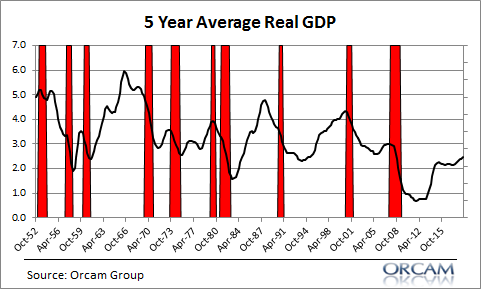 When the Fed starts hiking rates, it’s the beginning of the end of the business cycle. That being said, there are long hike cycles like the current one. There hasn’t been a recession since the Fed started hiking rates in December 2015 partially because the Fed has been hiking rates gingerly. Whenever the markets have feared a recession this cycle, the Fed has calmed them whether it’s through rate hike pauses like now or dovish language which we might see more of at the June 19th Fed meeting.

With such a long expansion, some investors have thrown out their playbook for timing the next recession. Some even believe the Fed has outlawed the business cycle by responding to every worry the market has. While the Fed has learned from prior cycles, it hasn’t ended the business cycle because there are always new circumstances. If the Fed could perfectly control the economy, we’d see higher annual growth than we have this cycle. Growth per year has been slow, which is why the total growth in this expansion isn’t at a record even though this expansion is nearly the longest since the 1800s.

The list below shows the typical playbook for markets and the economy when the Fed hikes rates. This list aims to simplify the cycle.

While it’s valuable, let’s review its potential flaws. First, let’s look at number 4. Housing sentiment weakened last year, but it’s starting to rebound this year. New home sales hit a new record high in March which was the first cycle high since November 2017. The more interest rates fall, the stronger the housing market will get (all else being equal). The housing market’s recession signal might be reversed. Number 7 refers to declining earnings revisions. While they have been weak in May, there was an earnings recession from 2014-2016 which didn’t lead to an economic recession.

Number 15 is perfect because we’ve seen an equity market relief rally even though the economy hasn’t exited its slowdown. Regardless of where stocks go, this will be a relief rally until the slowdown ends. We don’t usually focus on technical analysis on this website, meaning particular levels won’t stop this from being a relief rally. Number 16 is the PMI falling below 50. The May Markit flash PMI reading came close to falling below 50 as it was 50.9. It has only barely and briefly fallen below 50 a couple times this cycle.

The other important point about this chart is it shows a big downturn in mid-May and then a quick reversal. This matters because we assessed the preliminary University of Michigan index would have been lower if it only included data from after the latest round of tariffs were announced. We knew the sentiment reading would drop, but we didn’t know how much it would fall. As you can see, there is a 6.5% gap from the recent peak to the May 17th reading. This is similar to the drop late last year. However, now in the week of May 24th, it reversed, potentially signaling the tariff announcements didn’t have a sustainable negative impact on the consumer.

Is A Recession Priced In?

The chart below shows the odds 5 assets are giving as to whether there will be a recession.

Since the stock market falls 26% on average during recessions, you can divide the current decline by that to get the odds of an average recession. Since the market hasn’t fallen 5% this entire year, there hasn’t been much pricing in of a recession. The 20% decline in late 2018 mostly priced in a recession. Base metals and the 5 year treasury are showing there is a higher chance of recession than what stocks and credit spreads are pricing in.

As you can see from the chart below, 66.7% of investors think there is at least a 50% chance of a trade deal between American and China by the end of the year.

The U.S. economy is in a slowdown, but don’t take this article to mean the economy is surely on step 16 of a 20 step checklist to get to a recession. On the other hand, if PMIs fall below 50, you should be on watch for a recession. Some investors are downplaying the trade war because prior to the latest round of tariffs there wasn’t a major impact on the economy. The other reason for downplaying this risk is because they think there will be a deal since it’s in both countries’ interest to make one. Those are fair assertions, but the latest round of tariffs will hurt the consumer, which was weak in Q1 and there aren’t signs of a deal being reached in the near term (next month).