Which Industries Have Room To Grow? 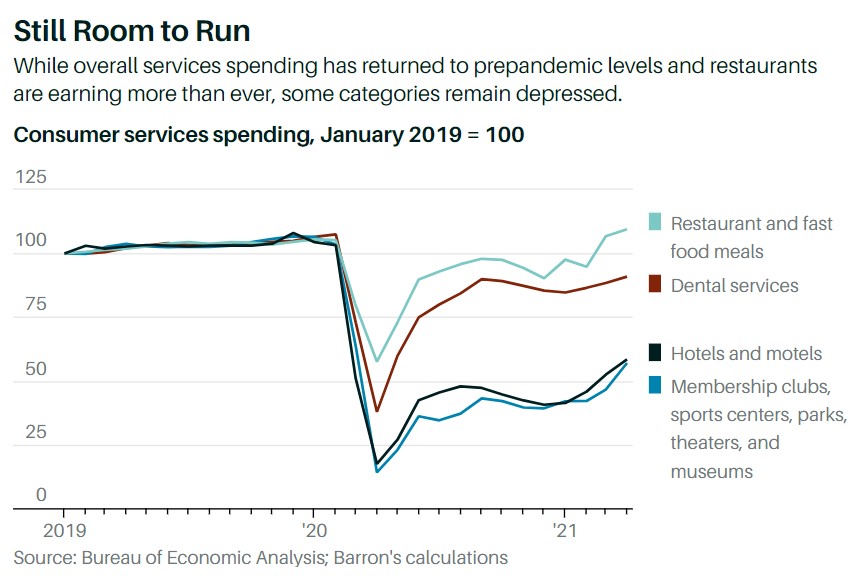 The May BLS report is expected to be redemption for the April report which dramatically missed estimates. Based on initial claims, we believe job creation will be much higher in May. We are very curious if April’s reading is revised higher. Usually when a report misses estimates sharply, it’s revised higher, making the initial reaction look foolhardy. This time we didn’t need to wait a month for the market to reverse its initial reaction. It occurred gradually over one day.

We expect the solid labor report to push the 10 year yield a little higher. The reflation trade has momentum in part because the latest COVID-19 wave in India has ended. The hope is India can increase its vaccination rate making this the last major wave. Indian government officials are projecting the country will be fully vaccinated before December.

Some Industries Have Room To Run

Eating out has already fully recovered to above where it was prior to the pandemic. There is likely some pent up demand that will temporarily keep spending above prior levels this summer. Some investors might expect this spike in spending to be a ‘new normal.’ If that theory works its way into asset prices, you can benefit from fading it. As you can see from the chart below, dental services still haven’t fully recovered to normal levels. Other surgeries are rapidly recovering. People put off surgeries that they needed last year. With the pandemic mostly over, they are getting them again.

The biggest room for improvement is in hotels, gyms, and theaters. Many investors believe the reopening trade is overdone. You can’t make such a broad-sweeping claim. Each stock is pricing in something slightly differently. You need to do your own due diligence on each security. Some might still be cheap. If you start with such a premise, you will miss opportunities. It’s best to start from a neutral basis and work from there.

On the opposite side, time spent on video games should fall, but not back to prior levels. Some of this spending and increase in time spent will stick. The billion dollar question is how much of it will stick. Once people work in the office again, it’s hard to imagine people spending as much time/money on gaming.

Bitcoin: No One Left to Buy

Popular retail stocks and cryptocurrencies became mainstream this year. Usually, finance isn’t this interesting. It’s a shame that some retail investors will have a poor experience following the inevitable return to normalcy. The only thing worse than losing money is learning the wrong lessons. Some consumers will lose trust in the financial system. The best solution for them is to buy index funds, but some won’t do this.

Because many retail favorite stocks and cryptocurrencies are so popular and have nothing backing them, they can run out of people to buy them. Contrast that with profitable firms which can simply buyback their shares if investors don’t want them. Companies like Apple and Proctor & Gamble don’t worry about investors not wanting their shares. Sentiment is everything when there is no hope for future cash flows (with commodities supply & demand determines prices along with sentiment).

As you can see from the chart above, the number of stories on Bitcoin is correlated with its price. The biggest question mark is the upper limit to the number of stories. With cryptos routinely trending on Twitter, gaining celebrity endorsements, and being discussed by regular people with no background in finance, it feels like we are near the top. Let’s see if the peak earlier this year is like the one in late 2017. As we mentioned in a recent article, the financial conditions index has come off the bottom, which could be a sign that this is like the high in 2017 for bitcoin.

Some subscription companies like to focus on sales growth instead of their churn rate because growth is nicer sounding. However, if the churn rate is high enough, the entire business model is broken. It’s like trying to plug multiple holes in a sinking ship. Companies usually don’t tell you their competition’s churn rate, so retail investors are left in the dark.

The chart below should be printed out and posted on your desk to contextualize the churn rate of whichever company you are looking at. A 6% churn rate in SaaS isn’t impressive, while a 6% churn rate in consumer services is better than the median.

Investors are wondering how sustainable high S&P 500 margins are since they reached new heights at the end of the last cycle. The big tech companies outside of Amazon aren’t worker intensive. As you can see from the chart below, the number of employees needed to generate $1 million in sales has fallen. We aren’t sure if this is adjusted for inflation; it’s obviously much easier to generate $1 million in sales now than it was in the 1980s. That being said, we are sure the big tech companies with higher margins don’t have that many employees. Software isn’t labor intensive.

The May BLS report will show over 500,000 jobs were added last month. The hotel, gym, and theater businesses will see a large spike in sales this summer. Video games might take a hit. It’s unclear what a return to normalcy looks like in this industry. Cryptocurrencies and many retail favorites rely on sentiment since they have no cash flows. The bubble will peak in line with the number of stories on the topic. We don’t know if the peak has happened. Study the churn rate of the firm you are analyzing in relation to its industry average. It takes fewer workers to generate sales than in prior decades. The big technology firms use their labor efficiently (they also have independent contractors for services such as janitorial work).