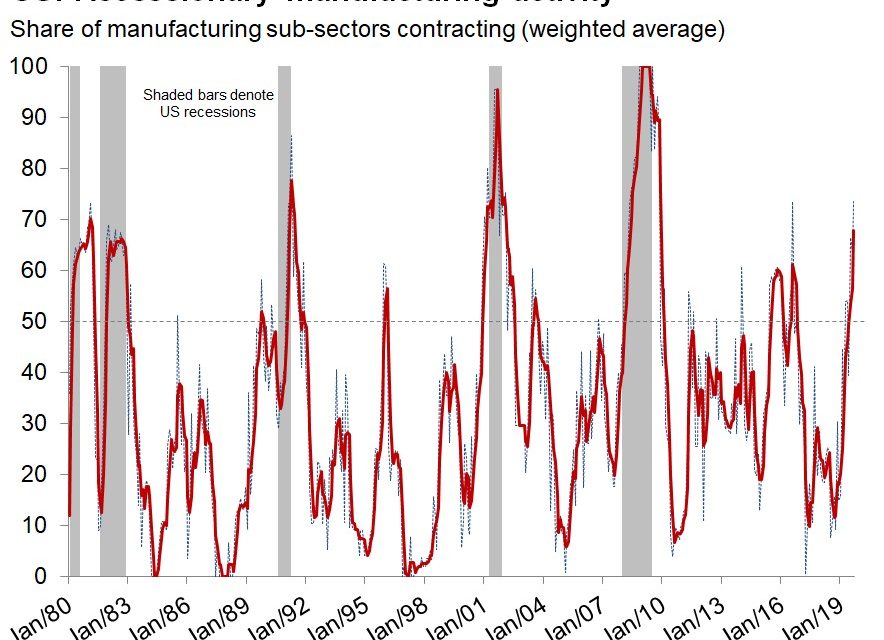 A zombie firm is a company that shouldn’t exist based on its business fundamentals (P&L), but does because of very easy credit conditions and low interest rates. Low interest rates help valuations and help some firms stay in business. The theory that central bank suppressed low rates have unintentionally created many zombies was combated by @ErnieTedesci on Twitter. He stated that demographics and some other factors are pushing down rates, increasing firms’ ages, and mitigating startup rates. There has been a slowdown in nominal growth in developed economies because of their slowing/declining population growth rates. These populations are also aging. Older people don’t create new companies as often as middle aged people. The wave of ‘boomer’ created start-ups is mostly over. It’s important to emphasize that while central banks do have an impact, it is not accurate to attribute all market responses on them, at least in the US. For instance, in places like Europe and Japan where there has been a higher level of central bank involvement with corporate equities and debt, this has contributed to the creation of zombie companies.

There are two great points as to why the U.S. economy won’t fall into a recession. The first is that global central banks are easing with the Fed. This could spur a global cyclical recover in 2020 if the rate cuts are effective. A ratcheted up trade war between the US and China would be a mitigating factor for a turnaround, but recognize that the trade war didn’t cause the slowdown. Specifically, the percentage of global central banks whose last rate change was a cut shifted from 38% to 82.4% in the past year. The Fed is about to cut rates for the 3rd straight time on October 30th as the futures market sees a 92.5% chance of a cut.

The second point is the U.S. economy is less cyclical as we have pointed out when discussing the employment gains in the healthcare sector. As you can see from the chart on the left, 19.1% of final domestic demand came from the cyclical sector in Q2 2019.

As the chart on the right shows, real final domestic demand growth in Q2 for cyclicals was only 0.2%. The economy would be at a standstill if it wasn’t for the non-cyclicals which have a negative correlation with cyclicals. Non-cyclicals had yearly real final domestic demand growth of 2.2% which is near the cycle high. There can still be recessions, but there needs to be a big imbalance to cause one, which we don’t see.

Which Sectors Are Sensitive?

The hotel industry has a 13.7% sensitivity value to a 1% change in GDP. Invest in this industry if you see a cyclical turnaround next year.

The latest update in the leading indicators report from The Conference Board was poor. Monthly growth rate in August was revised from 0% to -0.2% and monthly growth in September was -0.2% which missed estimates for 0.1%. Missing estimates with an easier comparison is not good. The September leading index was helped by the stock market and the leading credit index. It was hurt by weakness in the manufacturing sector (the ISM PMI) and the interest rate spread (10 year yield minus Fed funds rate).

Even with this negativity, this report is probably consistent with an expansion slowdown and not a recession. The best visualization of this is seen in the chart below. It shows the ratio of leading to coincident indicators.

If the ratio stabilizes and falls slightly, it’s a slowdown. We saw this happen from 2011 to 2013 and from 2015 to 2017. This recent 12 month period looks very similar to those slowdowns and nothing like the last recession. On the other hand, yearly growth in the leading index was 0.4% which is just a tick higher than the expansion low of 0.3% in June 2016.

Not The Best Industrial Production Report

Manufacturing production was -0.5% monthly which missed estimates by 2 ticks. As you can see from the chart below, yearly growth was -82 basis points which is in line with the weakening ISM PMI.

Zombies might not be caused by central banks artificially lowering interest rates. There might not be a recession soon because the economy is less cyclical and because global central banks are almost all cutting rates. Cuts are good for the global manufacturing PMI. The ratio of the leading to the coincident index is signaling this is a slowdown, not a recession. The industrial production report had weak growth because of the cyclical slowdown, the tough comparison, and the GM labor strike.