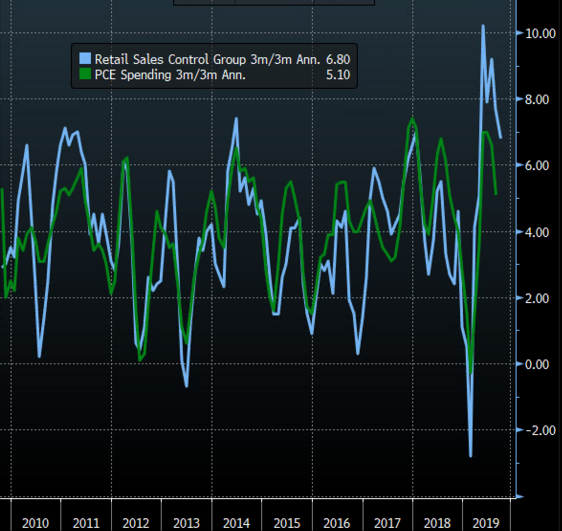 The very solid August retail sales report was revised higher which is the good news from this latest update. Headline monthly growth was revised from 0.4% to 0.6% which is very strong. Yearly real growth was 2.56% which was the highest since August 2018; yearly nominal growth was 4.36% which was the highest since October 2018. As you can see, both were the strongest of the year. The September report wasn’t as great as it missed estimates widely and growth fell. It was still a solid report as both real (2.34%) and headline (4.1%) yearly growth were the second highest since August and October 2018.

Excluding autos and gas, sales growth was 0% which missed estimates for 0.3%. The reading and the consensus were the same for the control group which goes right into the GDP report. The weakness in control group growth was expected because of the ridiculously high growth earlier this summer. Month over month annualized growth has been 10%, 3.9%, and 0.5% in the past 3 months. The chart below shows quarter over quarter annualized growth fell to 6.8%. That’s similar to the recent decline in PCE growth. The September PCE report comes out on October 31st.

The Details Of The September Retail Sales Miss

The table below breaks down each segment’s growth rate on a monthly and yearly basis. As the chart shows, clothing had the strongest monthly growth which was 1.26%.

Similar to August, this report had bad breadth. The percentage of the 13 categories with a negative monthly growth rate rose from 54% to 62%. This was the highest rate since the terrible December 2018 reading which was hurt by the government shutdown and stock market decline.

The main reason this report missed estimates sharply is because the two categories which drove over 100% of the monthly growth in August reversed course. Monthly growth in the motor vehicles and parts and online store categories fell from 0.93% and 0.82% to -0.94% and -0.34%. Their yearly growth rates fell from 7% and 15.33% to 5.56% and 12.88%. The prior three months of yearly online store sales growth were the highest of the cycle. At some point, this amazing run had to end, similar to the growth in the control group. These two categories drove almost all of the monthly decline. They drove monthly growth down 19 and 4 basis points. That’s 23 basis points of the 25 basis point decline.

Chicago Fed President, Charles Evans, stated he doesn’t see any more rate cuts in 2019 or 2020 which is consistent with the Fed’s guidance. That’s interesting because the disappointing retail sales growth report caused the odds of a rate cut in October to increase from 73.8% to 89.8%. Charles Evans stated, “I think policy probably is in a good place right now. All told, the growth outlook is good, and we have policy accommodation in place to support rising inflation.” It’s interesting that he mentions rising inflation because Cornerstone Macro’s model predicts core CPI will fall to 2.1% by Q4 2020 probably because of the cyclical slowdown. The model’s inputs are unit labor costs, nominal GDP, and M2 growth. It has a 76% R^2.

The Fed’s Beige book from September and early October told us mostly what we expected, namely that growth is weakening because of the cyclical slowdown and the trade war. The headline of this report is that the economy was downgraded from ‘modest’ to ‘slight to modest’ growth. The Beige Book read, “Business contacts mostly expect the economic expansion to continue; however, many lowered their outlooks for growth in the coming 6 to 12 months.”

In the week of October 11th, yearly growth in the MBA home purchase applications index rose to 12%. The decline in mortgage rates and strong expected real income growth have been a boon for the housing market.

The housing market index improved from 68 to 71; that’s a 20 month high. The chart below shows the NAHB index’s yearly growth in relation to the yearly change in mortgage rates pushed forward by six months.

The present sales index improved from 75 to 78. Sales in the next six months rose to 76 from 70. The prospective buyers index rose 4 points to 54 which is the highest reading since early last year. Every region rose as the biggest improvements were in the South and West which both increased 3 points to 73 and 78.

The September retail sales report wasn’t bad, but it missed estimates significantly. Monthly growth was negative mostly because of the weakness in motor vehicles and parts and online sales. Charles Evans mentioned battling inflation, but core CPI is expected to fall in 2020. The Fed will cut rates this month. The decline in rates led to the increase in MBA purchase applications and the housing market index. The trade war and the cyclical slowdown have caused weakness in expectations in relation to current activity in the NY Fed report.