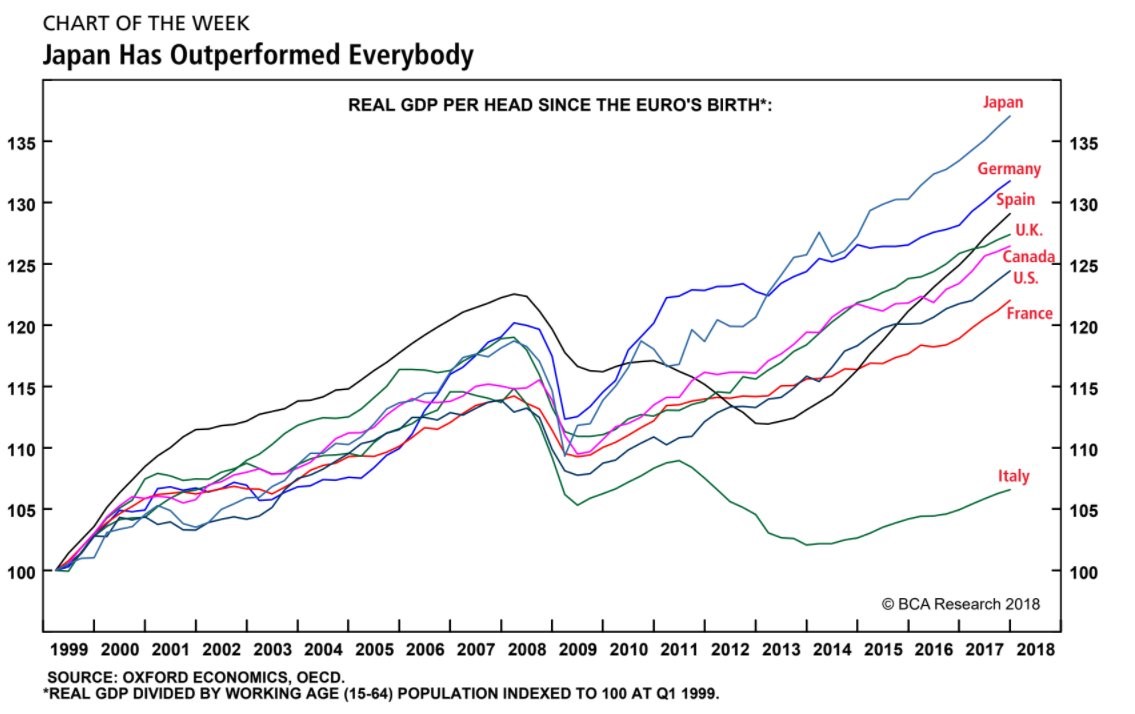 In previous articles, we’ve discussed how the European economy is seeing some weakness including Italy. That’s a short term issue. Although the U.S. stock market just started caring about the potential for an Italian political crisis again, this is a very long term issue which dates back to the creation of E.U. It’s important to contextualize this because the way the markets act, it could be construed that this headwind will suddenly go away like others have. This isn’t a risk the market will forget about quickly. It could be the biggest risk the stock market faces in the next few years.

The problem with the E.U. is it coordinates countries with one monetary policy, but each country sets its own fiscal policy. It’s politically easier to get countries to give up their monetary policy governance than fiscal governance because monetary policy is more abstract. People want to control how their government taxes and spends money, but ECB decisions aren’t well understood by non-finance people. Germany has done well with the E.U. because it benefits from the weak currency as it is a big exporter of goods.

Italy is the poster child for a periphery country which hasn’t done well under the E.U. Italy’s debt to GDP is 130%. The euro currency is too expensive for the country which hurts exports. As you can see from the BCA Research chart below, the Italian real GDP per capita has only increased about 5% since the E.U. was created.

It’s far below most other developed countries and the E.U. average. This is way below the 2.4% average annual GDP per capita growth in the 20th century. It’s not surprising to see only 37% of Italians have a positive view of the E.U.

Italian Problem Has Been A Long Time Coming

The weak economy, which hasn’t provided much opportunity to the Italian youth especially in the south, has led to a political crisis. This political instability will only be resolved with a long term solution to the economy. This shows why it’s not easy to push this problem under the rug. Tough choices need to be made, but the country has had high turnover in the government, so the chances of success are paltry.

Let’s dive into what has caused the latest political turmoil which has riled markets. The March 4th election gave the right wing populist parties, which are the 5 Star Movement and League, a higher percentage in the parliament, but no party earned a majority so a coalition needed to be formed. It’s easy to see why the 5 Star and League would join forces, but the reality is more complicated because their Eurosceptic roots don’t mean they agree on all the issues. They actually even disagree on Italy leaving the E.U. since 5 Star has moderated its stance to broaden its appeal as a party. One of the 5 Star’s main principles is to not form political alliances which further complicated the situation. It’s easy to run as an opposition party, but difficult to govern especially since the two parties have different goals.

Calls For The Impeachment Of Matterella Rile Markets

After finally forming a coalition government, the parties nominated Eurosceptic Paola Savona to head the economy ministry in the cabinet. President Sergio Matterella rejected this nomination. That’s not surprising because Matterella supports the E.U. As a result of this rejection, the leaders in the 5 Star Movement called for the impeachment of the president. That caused the markets to panic. As you can see from the Pension Partners chart below, the Italian 2 year yield spiked from negative to 2.74% very quickly. 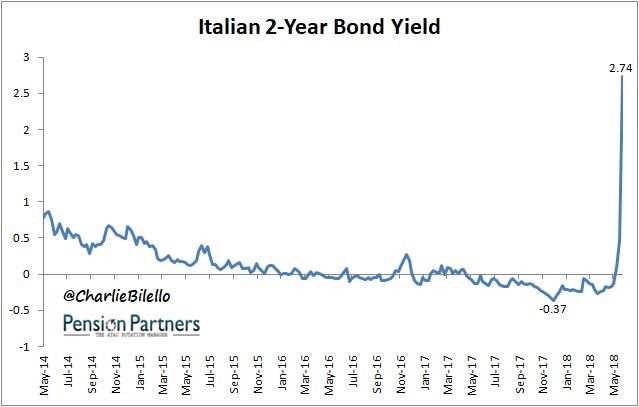 The situation is highly uncertain as we don’t know if another election is coming or how Italy will be governed in the near term. There are two aspects we do know. Firstly, the populist parties have intense momentum as they keep gaining in the polls and the elections because the economy is terrible and people want change. They also have the demographics on their side as the youth oppose the E.U. more fervently than older Italians who prefer stability. Secondly, 5 Star and League winning control of the government in a future election would increase the odds Italy will leave the E.U. Since the most well known aspects are negative for the E.U., the risk has begun to be priced into the market. As you can see from the Bloomberg chart below, the Italian 5 year default probability has increased to above 17%. This is a ‘fat tail’ event.

ECB Can Help, But It’s A Politically Tough Solution

The situation has played out perfectly for the 5 Star and League because not allowing a cabinet nomination gives them reasons to make arguments about how the establishment isn’t representing the people. If the establishment gave complete control of the government to the right wing, it would’ve been bad for these parties’ popularity because some of their solutions aren’t feasible or easy to accomplish. The least feasible plan both right wing parties agree on is dismantling pension reform which would increase benefits. Pension reform has helped Italy lower its deficit as the country actually would have a surplus without interest payments. With a debt to GDP of 131.8%, the country still doesn’t have room for excess spending unless the economy grows because of the massive increase in debt in the 1980s. The parties would start being blamed for the problems the nation faces, which would hurt their appeal.

If the right wing parties win another election and gain more power, there’s a higher chance that when their policies don’t improve the economy quickly, the parties shift towards supporting Italeave and it actually happens because they have a large share in the parliament. The E.U. can’t afford to bail out the country itself. The ECB is in the best situation to help Italy in the short term because debt buying lowers yields which eases servicing costs. As you can see from the Deutsche Bank chart, the foreign banks have limited their exposure to Italian debt which means the ECB is needed to stabilize the situation. 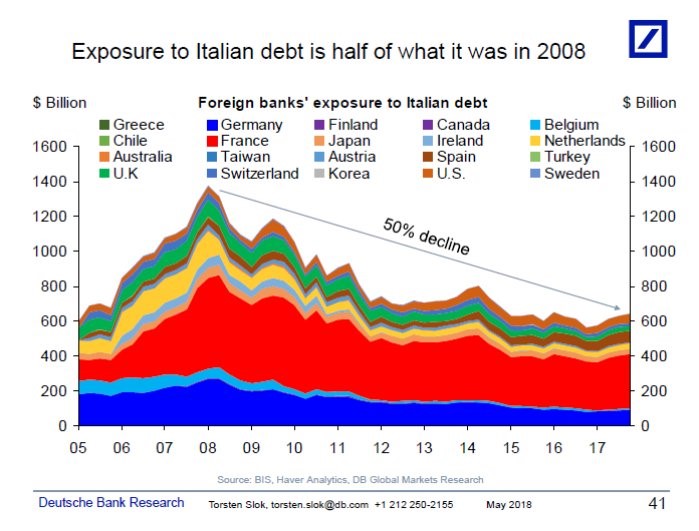 The big quandary for Italy is that the E.U. will want Italy to lower spending and make economic reforms in exchange for monetary policy help, akin to what happened in Greece. However, the right wing parties have discussed spending more on pensions and even asked the ECB to forgive $250 billion of Italian debt. It’s easy to say the ECB will just bail out Italy by buying debt like it has done in the past. The Bloomberg chart shows the ECB has been overbuying Italian bonds for the past two years. 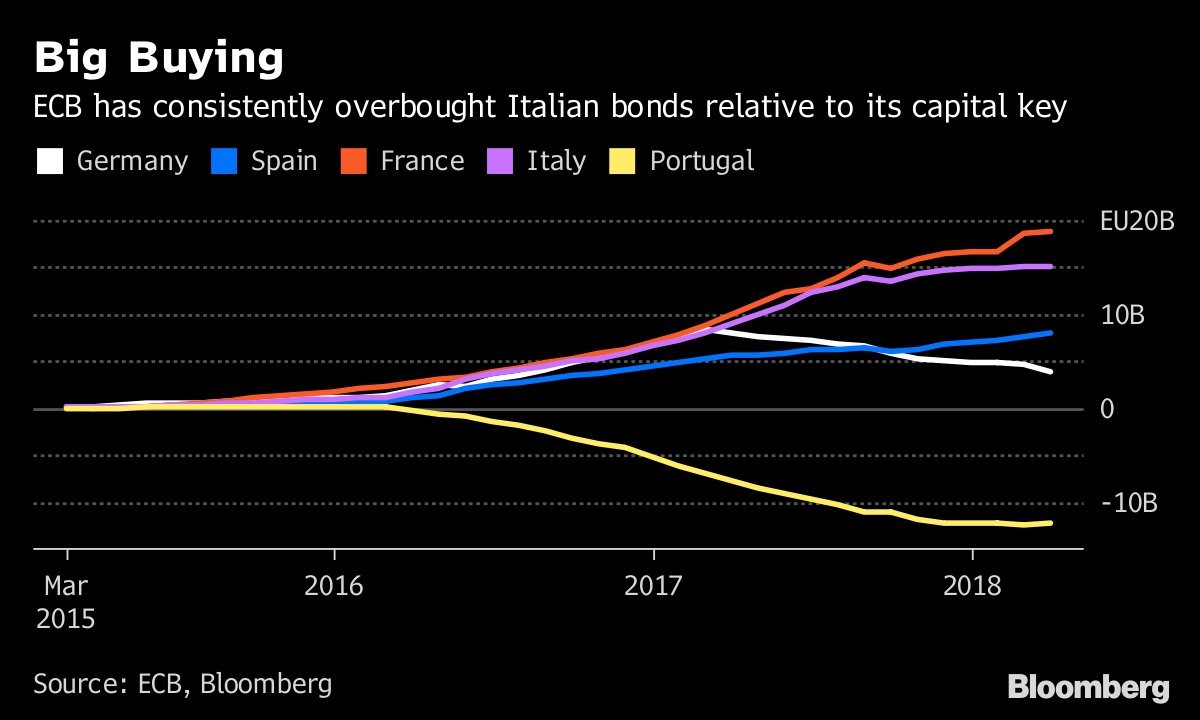 The problem is if the ECB doesn’t get Italy to reform, it will endlessly be forced to buy its debt. We might already be in that situation as the slowdown in ECB purchases and the recent political strife have riled markets prompting another round of bond buying.

The ECB has been paving over problems with bond buying for the past few years, but political risk can’t be solved easily. Italy’s weak economy has caused the youth to despise the E.U. If the economic problems aren’t solved, it’s inevitable that Italy will leave the E.U. or at least attempt to. This will cause volatility in risk assets across the world and push investors towards U.S. treasuries.