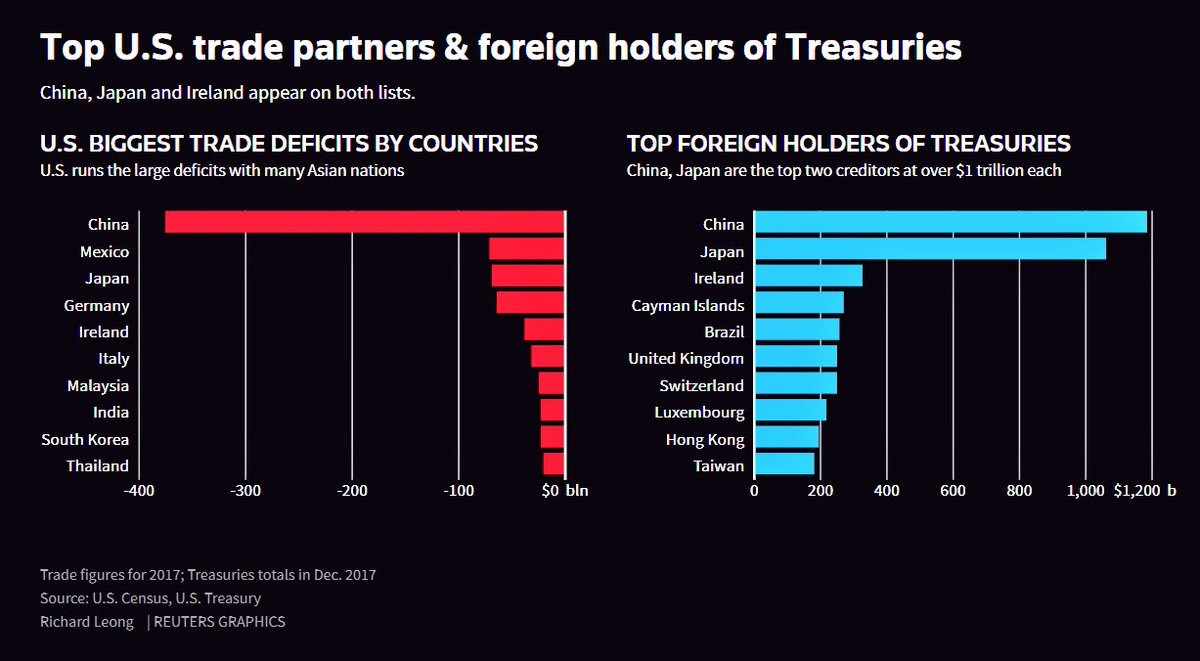 The purpose of this article is to objectively examine trade policy and its impact on the economy. While there will be discussion of government policy, our review is not negatively nor positively inclined towards any particular administration.

During the presidential campaign trail, then Candidate Trump stated that he’d renegotiate trade deals to stop other countries from ripping America off. Following the election, for the first year of his presidency, it appeared there wouldn’t be any trade wars as promised. This belief existed because Trump met with Chinese President Xi Jinping last May in which he negotiated a deal to open up the Chinese market to American beef for the first time since 2003. The world watched with bated breath to see if the meeting would go awry. Given the relatively strong economy, which has jobless claims at the lowest point since 1969 according to metrics the government looks at, one wouldn’t expect a sudden jolt for no apparent reason.

However, even though it looked like America would continue to have relatively free trade with minor changes, that path was broken after President Trump’s announcement of a 25% tariff on steel and a 10% tariff on aluminum. Trump met with the CEOs of American steel and aluminum companies who obviously agreed with his proposal because tariffs would limit foreign competition for these firms. It’s quite bizarre timing for Trump to suddenly act as if the steel and aluminum industries are in dire straits. It doesn’t make sense for the government to ever save an industry, but saving one that’s doing well is unusual.

According to the latest ISM Manufacturing report a fabricated metal products firm said the “Steel market is doing rather well. Everybody is out of what I need.” As you can see, Trump is solving a problem that doesn’t exist. Furthering this point, you can see in the chart below that U.S. steel imports are near where they have been in the past few years. Also, China only accounts for 2.2% of American steel imports; America is the 26th largest market for Chinese exports. If Trump wants to hurt China, this isn’t the way to do it. The main benefit will be seen in a few rural areas like Kentucky which will have job creation from the steel and aluminum industries. 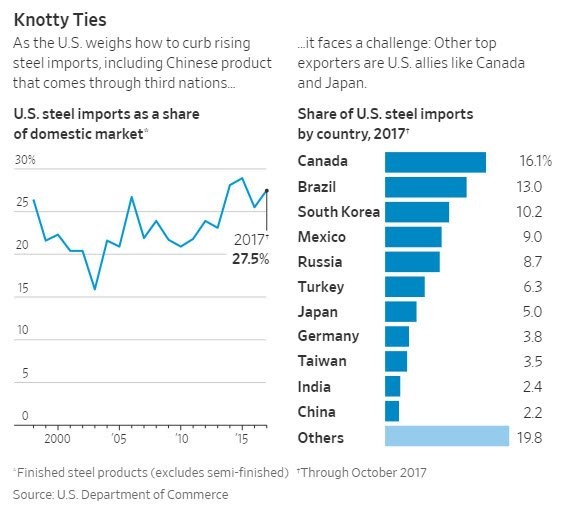 To be fair, Trump’s decision didn’t come out of hot air. Two weeks prior, the Commerce Department recommended three options. The first was a 24% global tariff on steel imports and a 7.7% tariff on aluminum imports. The second option was a 53% targeted tariff on 12 countries for steel imports and quotas on the other countries capped at 2017 levels. The aluminum tariff for the chosen countries would be set at 23.5%. The third option was an 86.7% quota for aluminum from all countries’ 2017 import levels with some countries excluded. For steel the level would be 63%. As you can see, Trump didn’t follow any of the advice exactly. The closest choice to his announced plan is the first one.

Some are comparing the tariff on steel and aluminum to the Smoot Hawley Act of 1930. That tariff was on 20,000 goods. It’s a bit overzealous to compare the two because steel and aluminum account for 2% of total goods imports as you can see from the chart below. 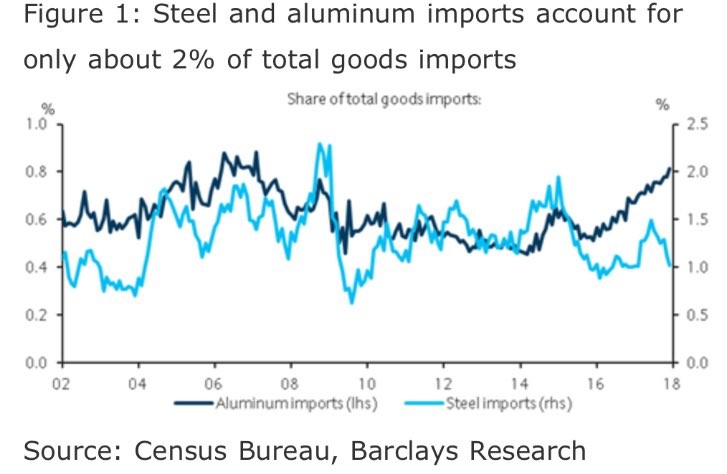 Furthermore, the tariff proposal was met with sharp criticism by the GOP. Furthermore, Trump’s chief economic adviser Gary Cohn strongly opposes this tariff. Aditionally, we’ll point out that the German Steel Association claimed the potential Trump tariffs violate the WTO rules. In fact, after George W. Bush instituted a steel tariff in 2002, the WTO fined America $2 billion, forcing it to rescind the tariff because it violated America’s trade obligations.

It wouldn’t be an issue if Trump was only solving a problem which doesn’t exist. Unfortunately, there’s collateral damage because of this. Tariffs cause trade to slow which hurts globalization. Globalization is often thrown around as a negative term, however its what increases the number, quality and cost effectiveness of products and services available to you, thereby improving your standard of living. Free trade allows countries to specialize in what they are the best at. Specialization means costs go down and value goes up. It’s just like how a writer doesn’t need to farm for food because of workforce specialization. If tariffs slow down trade, consumers will pay more for goods. Since aluminum and steel are raw materials, this means many goods will cost more.

A trade war, which tariffs are because they hurt industries in other countries, means countries could institute retaliatory tariffs on the US. Before we get to the specifics of the counter tariffs, it’s important to understand that it’s incorrect to state that America has nothing to lose if it gets in a trade war because of the existing large trade deficit. This is akin to playing chess and expecting your opponent to not do anything when you “check” them. For those unfamiliar with the game of Chess, a “check” requires the opponent to make a move to protect the king (chess piece). For other countries not to respond to tariffs, assumes that leaders of those countries do not have any of the same social and political factors and influences that shape policy decision making in the US.

Trade Deficits Aren’t Bad, Until They Are

Trade deficits are a sweet deal for the US because America buys goods from other countries, such as China, following which China takes that money and invests it back in the US through foreign direct investments and simply buying US Treasuries. However, there is no free lunch, and some industries have left the country because of cheaper labor abroad, hurting certain segments of the population significantly. It’s important to remember that this has also occurred as a result of innovation and technological improvements, proving that its critical to always improves ones skills and adapt to changing circumstances, otherwise you are at risk of becoming obsolete.

For instance, as we have discussed previously, the manufacturing sector in the US, in certain segments, is underemployed, without sufficient labor available and a significant skills gap. The labor market isn’t perfect, as any one indicator or statistic could suggest, however the point is that increasing tariffs (cost of goods), which in turn increases the cost of the products, is not a solution. Something to keep in mind as well, is the significant trade deficits and balance sheet problems faced by the US, at one point or another, will become a weakness, not a strength. As we discussed in a recent article “US Debt Becoming A Problem For The Dollar” – the process may already be underway.

Brazil, the E.U., China, Japan, Canada, and Mexico have all stated they’re considering retaliatory measures against America because of the proposed tariffs on steel and aluminum. Canada is considered an ally of America, so this shows how problematic these tariffs might be. The head of the European Commission, Jean-Claude Juncker, said, “We will put tariffs on Harley-Davidson, on bourbon and on blue jeans – Levi’s.” The E.U. is looking to tax firms which have headquarters in key Senate and House leaders’ districts. That’s interesting because the GOP doesn’t even support the tariffs. House Speaker, Paul Ryan and Senators Hatch, Sasse, Lee, and others all disagree with it.

The worst-case scenario would be if countries decided to stop buying US Treasuries. That would cause interest rates to spike. As you can see from the chart on the right, causing harm to China, Japan, and the E.U. from a tariff perspective is a terrible idea because they hold a lot of U.S. treasuries. You can see that China plows the money gained from trade with America right into U.S. treasuries. A hypothetical analogy for this would be you egging the bank that is the lender on the mortgage to your home – a very bad idea (do not do this).

There are always pros and cons to any policy. As we like to say, the truth is not black or white, but generally someplace in the middle. So far, ancillary evidence of the proposed tariffs suggests that the costs outweigh the potential reward.