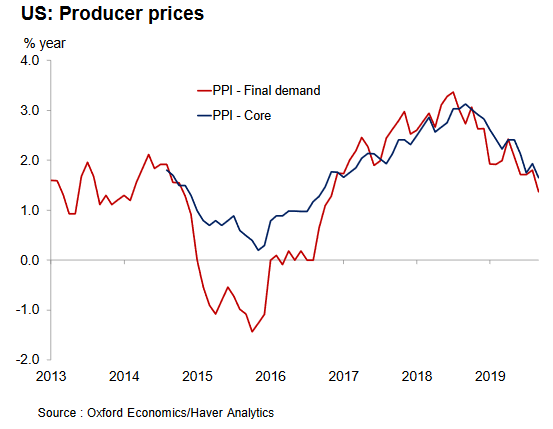 If two countries are set to meet for negotiations, you want to see positive rhetoric from politicians and potentially even positive actions before the meetings. There was positive action when Trump delayed the latest round of tariffs from October 1st to the 15th. Unfortunately, it has been all negative recently which has pushed the odds of a trade deal lower.

The graphic below shows the most traded goods between China and the US. These are the goods which are affected by changes in trade policy.

If progress towards a deal isn’t made, markets will quickly shift to focusing on the meeting between the US and Europe on Monday which is right before the $7.5 billion in U.S. tariffs on Europe go into effect on October 18th.

This decline in inflation is exactly in line with the cyclical slowdown. Inflation bottomed in 2016 along with economic growth and it topped in 2018 with economic growth. It’s easier for the Fed to cut rates if inflation falls, but it’s falling because of the economic slowdown which is the reason for cuts in the first place.

The Fed mainly reacts to PCE inflation which comes out on October 31st. Therefore, we look for clues about how PCE will turn out in this PPI report. These clues explain why PCE inflation rarely misses/beats estimates by much. In this PPI report, monthly personal consumption measures were -0.3% on an overall basis and -0.2% excluding food and energy. The decline in PPI signals weakness in PCE inflation. One potential driver of inflation is healthcare services.

As you can see in the chart below, monthly healthcare services PPI was 0.4% which was the strongest monthly gain since October 2017.

Even though the NFIB small business confidence index fell from 103.1 to 101.8, which missed estimates for 102, the index was relatively strong. This widely differs from the extremely pessimistic sentiment expressed in the CEO confidence survey we examined in a previous article. It’s possible small businesses confidence is relatively high because a Republican is president. That being said, 30% of small firms cited tariffs as a negative for their company. The impact just wasn’t large enough to turn small firms outright negative or even neutral.

As you can see from the table above, 7 categories in the NFIB sentiment report showed declines and 3 showed no change from last month. None were up. The biggest decline was in the net percentage saying now is a good time to expand. That fell 4%. It’s no surprise fewer firms think it’s a good time to expand given the uncertainty on trade and the cyclical slowdown. It’s actually surprising the index didn’t fall further. On a relative basis, expectations for real sales and plans to make capital outlays fell less than expectations on the economy. This implies sentiment is worse than reality. That’s in line with the relative underperformance of soft data versus hard data. Unfortunately, the soft data might not turnaround soon because the news on the trade front has been negative.

The cost of labor is a big issue for small businesses. As you can see from the chart, below 11% of firms named cost of labor as the biggest problem for them which is the highest reading since at least 1986.

This percentage increases at the end of cycles when the labor market is tight and wage growth is high. This percentage is in line with the high wage growth for production and non-supervisory workers. To be clear, we’d rather see hiring weakness because the high cost of labor and a limited supply of workers than because of sales weakness.

The latest news on trade has been bad. If the planned tariffs are implemented, there will be a big impact on 2020 economic growth. Hopefully, at least the meeting with European leaders goes well. The PPI report showed a decline in inflation. Core PCE inflation will likely be below 2% which means the Fed won’t face pressure to stop its rate cuts. The NFIB small business confidence index showed a modest decline. It still shows firms are optimistic which is a sharp difference from the negativity expressed by CEOs in the Conference Board survey.