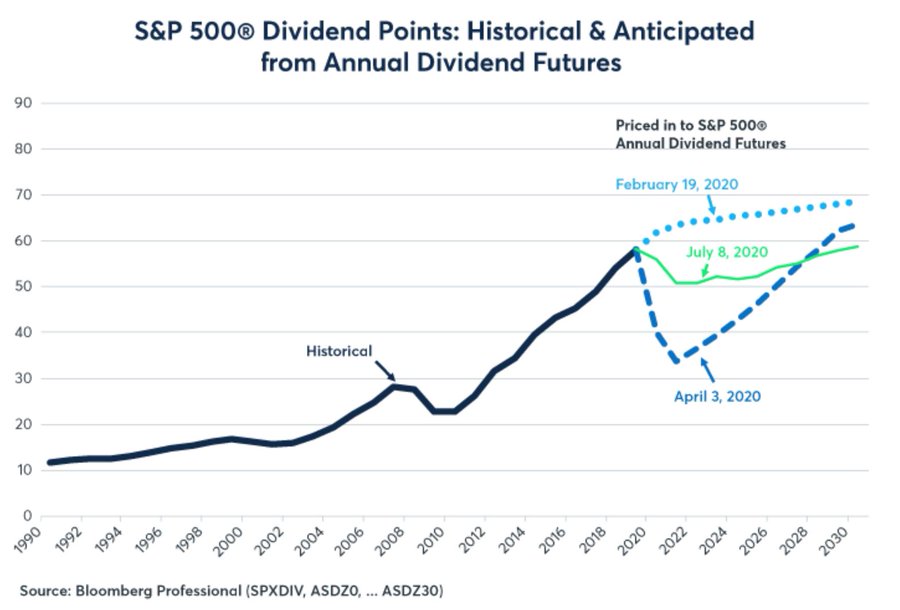 In Q2, most stock buybacks were suspended and there were share issuances to shore up balance sheets. That doesn’t support the thesis that stocks have only risen in the past decade because of stock buybacks. This spring, some were saying that the rally might end because of the lack of buybacks, but it didn’t slowdown. Because stocks recovered so quickly, the buyback critics didn’t get the opportunity to criticize the previous high prices paid for the shares like they did after the financial crisis. The crux of the criticism of buybacks is they hide high executive pay packages. However, that’s more of an issue with executive compensation than buybacks.

Dividends also fell sharply in Q2. They fell a net $42.5 billion which was the worst drop since the $43.8 billion decline in Q1 2009. Most of the dividend cuts were from smaller companies as the S&P 500’s dividend payouts only fell from $127 billion to $119 billion. We have catalogued the major vacillations in dividend expectations in the past few months. There was a point where investors were expecting the greatest decline in dividends paid out ever and for them to not recover to pre-crisis levels for many years. That was a sign of peak pessimism. The pendulum has now swung in the opposite direction.

As you can see from the chart above, the dividend futures show a much shallower decline in dividends paid than was expected in April. It’s odd to see this expectation still show dividends not getting to the prior peak until the late 2020s. Obviously, this depends on corporate profits, but if stocks are already closing in on their prior peak, you’d think we’d see a quicker recovery in profits and dividends. Q2 earnings season is the trough of this recession. The current blended EPS estimate is for -44.11% growth. Clearly, markets expect a quick recovery. These expectations are being supported by future estimates as the firms that have reported Q2 results so far are having their best change in EPS estimates on an absolute and rate of change basis for any quarter in over 10 years. (This data is from @EarningsScout on Twitter).

The US economic surprise index is at a record high even though the economy has started to slow in the past 4 weeks. That’s likely because the official economic data is delayed. We haven’t gotten much data from July yet. Much of the June data has been strong because the economy hadn’t weakened by the survey periods. This hasn’t exactly been a double dip recession either, so including the 2nd half of June won’t be a death knell for reports. We’re explaining this thoroughly because you wouldn’t expect economic reports to be beating estimates at the highest rate ever in a slowdown.

Survey timing is likely why the June NFIB small business sentiment index was strong and beat estimates sharply. The updated data showed more small businesses were closed in the 2nd half of June than the first half. There are some weakening trends not shown in this NFIB survey. Specifically, the NFIB index increased from 94.4 to 100.6 which beat estimates for 96.7 and the highest estimate which was 99. This looks like a V shaped recovery if you’re just going with this survey.

According to the July BAML survey, only 14% of fund managers see a V shaped recovery. That’s compared to 44% who see a U shaped recovery and 30% who see a W shaped recovery. The good news is 72% expect stronger global growth which is the highest since 2014. Judging by the economy’s current standing, it seems like it is further away from a cyclical peak than it was in 2014 when there was global synchronized growth (2015-2016 was a slowdown).

As you can see from the chart above, there was a massive 37 point jump to 13% in the net expectation for real sales to be higher. On the other hand, the net expectation for earnings trends fell 9 points to -35%. Sales outperforming earnings is in tune with S&P 500 earnings season as margins have plummeted. On the positive side, there was an 8 point improvement in those saying now is a good time to expand as it rose to 13%. Furthermore, the net reading of plans to increase employment rose 8 points to 16%.

The spike in COVID-19 cases in the west and the south catalyzed a slowdown starting in mid June. As you can see from the chart on the left, as of July 10th, consumer spending growth still hasn’t improved since the slowdown started 4 weeks prior.

The bad news is consumers are about to be dealt a blow as the extra $600 in weekly federal unemployment checks is ending on July 25th. Either consumers are lowering their spending in anticipation of this hit to their incomes or the stagnation is just because of COVID-19. If it’s only because of COVID-19, that’s bad news because the consumer has further to fall. The COVID-19 situation should improve as proper precautions are being taken. That won’t get consumers help from the government though.

As you can see from the chart on the right above, the alternative data tracker was correlated with the BLS employment calculation of the hardest hit areas from mid-February to mid-June. The tracker has weakened in the past 4 weeks which spells bad news for the July BLS report. We keep saying that the market will probably price in a weak report before it happens, but the S&P 500 hasn’t reacted. The retail stocks have fallen though. On the other hand, the positive vaccine news headlines might cause the market to ignore all of the weak data this summer. If there is any accuracy to these headlines, consumers will likely become much more optimistic ahead of any vaccine, if they believe the virus will go away.

Stock buybacks fell in Q2, but stocks rose. The expectations for future dividends have improved as sentiment on corporate earnings has swung from pessimistic to optimistic. The US economic surprise index is at a record high because of old data like the small business survey which showed optimism increased in June. Consumer spending growth hasn’t improved in the past 4 weeks. Stocks have risen, but the retailers like TJX and Burlington have fallen, showing us that the market hasn’t ignored this bad data. The labor market looks to have fallen back in the past 4 weeks which is bad news for the July BLS report. Stocks will ignore bad economic data if positive vaccine news comes out.