No Optimism On Wages, No Problem 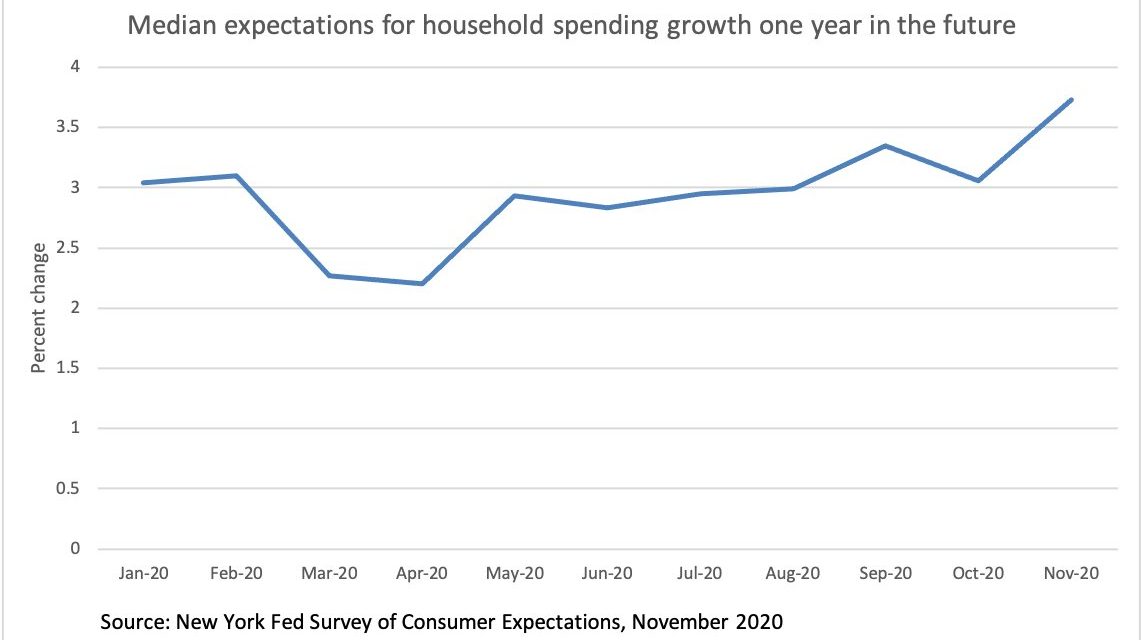 The NY Fed’s consumer expectations survey had shocking results. Median spending growth estimates for the next year spiked. That increase was driven by low income households. The main narrative is the COVID-19 recession is hurting the poor the most. That’s correct. Median earnings growth estimates for the next year stayed at 2% which is below last year’s average of 2.3%. The probability that the unemployment rate will rise in the next year (according to consumers) rose from 35.4% to 40.1%. Expected household income growth stayed at 2.1% which is below 2019’s average of 2.8%. It appears consumers are willing to spend more without much optimism on wages, earnings, or the unemployment rate.

As you can see from the chart above, estimates for spending growth rose 0.6% to 3.7% which is the highest growth estimate since July 2016. We already know medians aren’t disproportionately impacted by the rich. The survey showed this improvement was mostly driven by households making under $50,000.

This improvement could be related to the consumer’s low debt service ratio. Plus, consumers might anticipate their own pent up demand for spending on leisure and hospitality. They might plan to go out to dinner more. Anecdotally, it seems more obvious than ever that we will spend more in 2021 if the vaccines are distributed effectively. It’s just surprising this spending expectation comes along with tepid economic estimates and the fact that it is coming from people in households making less than $50,000.

As you can see from the chart below, the most shorted stocks have had 17 record closes in Q4 which has beaten the major indexes.

The most shorted stocks are up 191% since the March bottom. Shorting stocks in 2020 is like playing a video game on expert mode. Furthermore, the risks are limitless. Obviously, you can set stop losses or use options, but if you constantly want to have short exposure, it hasn’t worked no matter what strategy you tried.

The worse the company, the better the stock has done which makes the situation so tempting for short sellers. It feels right to have shorts and there are plenty of opportunities, but because losses can mount quickly, you can’t wait out the market. This isn’t like value investing in dividend paying stocks where you can be assured capital will be returned over time. In the case of shorting, even capital raises and weak results haven’t been enough to push stocks down.

In the long run, it’s impossible for dilution to not matter, but timing is everything for the shorts. A short seller can say they have no problem staying in a short for a while, but that’s not financially feasible when the stock is rallying higher. The fact that this is one of the worst markets for short sellers ever is a bad sign for the speculative stocks. Things like this tend to mean revert. Low rates can’t prop up bad businesses that dilute shareholders.

2020 has been a wild year in markets as we had a sharp crash and a quick reversal that led to euphoria. Therefore, saying this is the craziest chart of 2020 carries weight. It’s no surprise the craziest is in the SPAC category because these have harbored the most speculation.

As you can see, SPACs without deals announced have risen 20% year to date.

The S&P 500 is up 12.9%. In other words, vehicles looking for private acquisitions which will likely end up being unprofitable companies have beaten the large cap index which is having a good year. The hope of potential speculation has been better than reality. You can see how well SPACs with deals have done this year. In that frame, this speculation makes sense. One other benefit of SPACs without deals is you can say no to the deal and get your money back.

Because there is so much demand for private companies with high sales growth, SPACs are getting desperate. Do you really think after the deals we have gotten so far, that there are more potential opportunities now? Capital is chasing everything and anything. Even firms without sales are seeing their stocks pop. This is exactly like the marijuana bubble and the tech bubble.

As you can see from the chart below, the median post-merger return of SPACs has been -34.9% in the following year. This data is from the 47 SPAC mergers from January 2019 to June 2020.

The current mania in 2H 2020 probably will lead to worse returns because the quality of the companies is falling as investors are looking past bad results. Furthermore, the pre-deal rallies take away some of the post-deal gains.

IPOs are far more legitimate than SPACs, but they have had a frenzy around them as well. The median price to sales ratio of tech IPOs is 23.9 which is the highest since the tech bubble which peaked in the high 40s. As you can see from the top chart below, IPO first day returns this year are the 3rd highest ever, with only 1999 and 2000 beating them. In the past few years, about the same percentage of IPOs have been unprofitable as in the tech bubble. That’s partially due to low rates. The scene was set for this level of speculation in the last expansion, but the mania only started in 2020.

People in households making less than $50,000 per year are very optimistic about their spending growth in 2021 despite the current challenges the economy faces. This is one of the worst markets for short sellers ever. Even SPACs without a deal are beating the S&P 500. SPACs have historically been bad investments, but that doesn’t phase traders who are looking to flip them. IPOs are about as unprofitable as the tech bubble, but current tech IPOs have lower valuations and the first day pop of all IPOs is smaller.