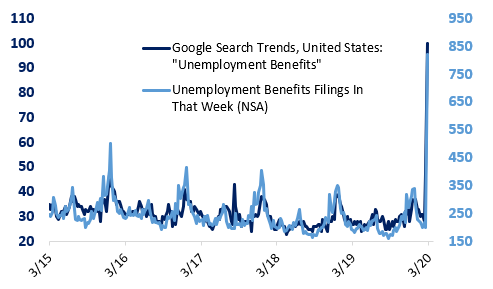 Before we get to the main points of this article, let’s review how you can keep track of the latest results on COVID-19 and restaurant sales. As we previously mentioned, https://www.worldometers.info/coronavirus/ tells you the latest results on the number of cases in each country and state as well as the number of deaths, the number of recoveries, and the number of critical cases. The current debate is over whether China’s recovery is temporary. China’s economy has been normalizing except in Hubei. It would be amazing if America could follow in its footsteps in the next couple months.

If we were sure this virus won’t hinder economic activity in the 2nd half of 2020, stocks would be soaring. That’s not the case as there are fears after a few weeks of re-opening the economy, it will come back. The risk is there might be a need to open and close the economy until the vaccine is ready, which could take much longer than the next few months. To learn more about the situation, read the paper everyone is talking about. It’s by Imperial College. https://www.imperial.ac.uk/media/imperial-college/medicine/sph/ide/gida-fellowships/Imperial-College-COVID19-NPI-modelling-16-03-2020.pdf

The 2nd website to review is https://covidtracking.com/data/. It tracks all the reported tests being done in each state. South Korea has done the best at dealing with this virus by testing as many people as possible. The testing rollout in America was a disaster, but it has since improved as states are starting to set up drive thru testing sites. Testing isn’t at full capacity yet, but if you believe government officials, the situation will be in better shape over the next week or so.

The final website is https://www.opentable.com/state-of-industry. This isn’t about COVID-19. It instead shows the yearly decline in bookings at restaurants through OpenTable. It’s a window into the impact COVID-19 and the shutdowns are having on businesses. The reality is many restaurants will go bust in the coming weeks, laying off thousands of workers. Politicians say no business should go bankrupt due to COVID-19, but that’s just a talking point. Firms are already feeling the pain. On March 16th, bookings were down 56% from last year.

The House passed a fiscal stimulus. Now the Senate is looking at it. The unfortunate reality is this won’t be enough money to help families deal with the crisis. The package is too small. It is $1 trillion. There is $500 billion to $550 billion in direct payments or tax cuts. The estimate is $250 billion will be direct payments. That’s about $1,200 per adult in America ($2,400 if only the bottom half get it). If someone loses their job, they won’t be able to get by on just $1,200 unless another stimulus comes very soon. We’re sure that if this stimulus goes out in 2 weeks, many Americans will feel it is too late.

The rest of the package includes $200 billion to $300 billion given to small businesses which also isn’t enough money. That’s about $10,400 per small business if the package is on the high end. That’s not enough money for most small firms which are getting destroyed. While no interest loans are nice, it’s illogical to stay open if you’re going to incur new debt every day.

The final part is $50 billion to $100 billion in industry relief. The airlines alone asked for $50 billion. The hotels alone asked for $150 billion. The cruise lines have also indicated needing money. There is a huge political blowback against helping airlines because of the buybacks they did in the past few years. That could mean equity holders getting wiped out in these bailouts.

Labor Market To Be Hurt Brutally

Prior to this acute shock to the labor market that perfectly defines what a black swan is, the labor market was doing well. We had the longest streak of positive monthly job creation by far. Unfortunately, the shock that will hit the labor market starting this spring will cause the unemployment rate to skyrocket. As we mentioned earlier, restaurants are feeling the brunt of this virus because they are places where people come together. As you can see from the chart below, restaurants are over 7% of the labor market and leisure and hospitality is about 11%.

Restaurants do well in the new economy as they are resilient to the trend towards buying goods online. COVID-19 is a major blow to the labor market. We will see a spike in job cut announcements starting in either the March or April job cut report.

Jobless claims have shown no impact from COVID-19 yet, but that will change starting in the next 2 reports. As you can see from the chart below, the Google searches for “unemployment benefits” have spiked.

We don’t just have to rely on searches though. Connecticut reported there have been 30,000 claims since Friday which is more than the usual 3,000 to 3,500. That implies 1% of the labor force lost their job in the past few days. The results could actually be worse because Connecticut isn’t one of the hardest hit states by the virus. It has just 68 cases compared to New York’s 1,708 and Washington’s 1,014. Ohio had 12,000 claims on Sunday and 36,645 on Monday. That’s compared to 562 last Sunday.

In one sense, its positive to see dire forecasts come out since it means the market is coming to grips with reality. Be prepared for the worst, hope for the best. Obviously, it’s terrible that this is happening in the first place. Oxford Economics sees 1 million in job losses in America. The rest of the world isn’t immune to this weakness. As you can see from the chart below, Westpac Economics sees the Australian unemployment rate reaching 7% by October.

We gave you the best websites to do your own research on the COVID-19 crisis because we can’t provide up to the minute data in our articles. The labor market is about to be hit very hard as leisure and hospitality firms will hemorrhage jobs. The U.S. fiscal stimulus won’t do enough to help families and small businesses. The dire forecasts aren’t just for America. Australia will also see its unemployment rate spike. This will be a global economic recession.