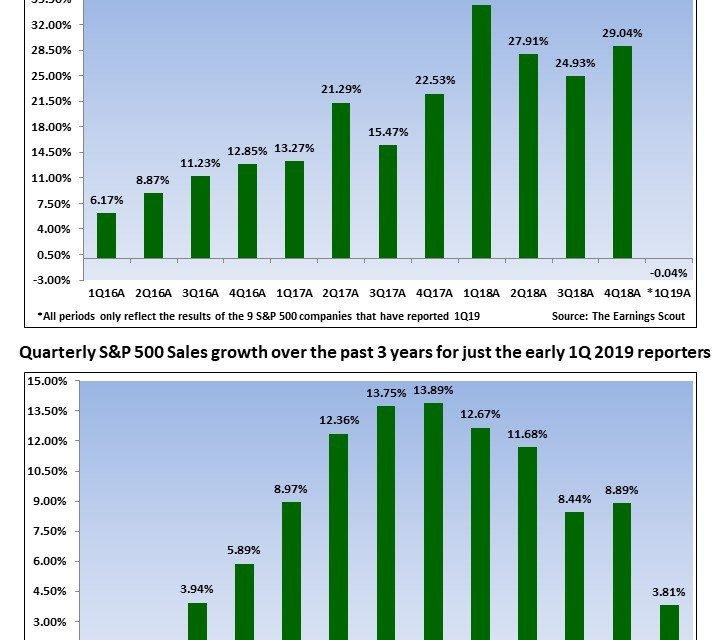 Despite the late selloff on Friday, it’s safe to say investors buying stocks at current levels believe the decline in earnings will begin and end in Q1 2019. It’s fair to point out that revenue growth will be positive; the counterpoint is the S&P 500 is up 13.88% year to date and is down just 2.59% from its record closing high. On average, the S&P 500 recovers from bear markets in 6.5 months when the economy isn’t in a recession. The September top was about 6 months ago meaning the rally is right on schedule.

The scary part of the recent stock rally is economic growth is still headed in the wrong direction as the median Q1 GDP calculation (collected by CNBC) calls for only 1.4% growth. The first very weak EPS growth quarter hasn’t even seen its earnings season get fully underway yet. However, investors started piling into stocks at the start of the year. They jumped the gun which has been a great boon thus far. The results from the first S&P 500 firms reporting Q1 earnings haven’t been good.

As you can see from the chart below, EPS and revenue growth for the first 9 companies fell off a cliff compared to Q4 2018.

The comps are tough, but it’s notable how EPS growth declined from 29.04% to -5 basis points and revenue growth declined from 8.89% to 3.81% sequentially. Since this chart was made, 2 firms reported earnings, so the updated numbers are the following: 91% of firms beat EPS estimates on 1.77% growth and 45% of firms beat sales estimates on 4.17% growth. To be clear, this earnings season could be better than is indicated by the first 11 firms. We will be watching how Q2 EPS estimates react to firms reporting Q1 results. The bullish investors hope another round of guidance reductions aren’t on their way.

The leading indicators index increased for the first time in 5 months in February as you can see from the chart below.

Jobless claims, which is another part of the leading index, fell in the week of March 16th to 221,000 from 230,000, but the 4 week average increased 1,000 to 225,000. That jobless claims reading was the sample week for the March BLS report which implies the report should be decent. Jobless claims were 4,000 higher than last month’s sample week, but that doesn’t mean there will be less job creation because the weak February job print wasn’t close to in tune with the solid jobless claims report.

Because fund managers seem to be skeptical of the economy, most surveys lean in the bearish direction. To be clear, in the March survey, the net percentage of fund managers expecting the global economy to improve in the next 12 months increased, but it’s still highly negative. Plus, only a net 3% of fund managers were overweight equities.

Respondents changed their opinions in the correct direction on interest rates, judging by the Fed’s recent guidance for no hikes this year. The net percentage of fund managers expecting short-term rates to increase fell to a 6 year low. However, it was still modestly positive (about 20%) which means more fund mangers were incorrect than correct (based on Fed guidance). This partially explains why bonds reacted sharply to the Fed’s decision that met expectations. Many fund managers had to change their positioning once it became clear the Fed wouldn’t be hiking rates this year

As you can see from the chart below, the percentage of fund managers who stated they want firms to increase their capex fell to a 10 year low.

If you think the economy will falter, you wouldn’t want firms to expand their operations. However, the outlook wasn’t extremely dire because the desire for firms to return cash to shareholders increased at the behest of wanting them to improve their balance sheets. In a recession, the strength of a firm’s balance sheet is critical because credit markets seize up.

The chart below shows the historical list of the most crowded trade.

The long run of FAANG+BAT and the short run of the long U.S. dollar trade being on top have both ended. Now being short European equities is the most crowded trade. One metric that supports those going long European equities because they like to go against the crowd is that the European economic surprise index has increased from worse than -80 early in the year to only -26.1. It’s headed in the right direction at least.

Year over year world industrial production growth improved from 1.2% to 1.8% in January, signaling manufacturing growth might be rebounding. The March U.S. Empire Fed and Philly Fed reports were a mixed bag because the Empire Fed’s current index fell, and the Philly Fed index had a strong rebound. The Empire Fed’s expected index fell slightly, and the expected Philly Fed index fell even more. It’s tough to know what to make of that. These regional Fed indexes help us predict the ISM PMI as shown in the chart below.

The Philly Fed index increased more than the Empire Fed index fell, so the average increased. However, both expectations indexes fell, so it’s not a perfect situation.

Q1 2019 earnings results won’t be great, but the market is looking past that. The leading indicators suggest there won’t be a recession this year. Fund managers are pessimistic which is why they don’t want firms to increase their capex. They also think European equities are overly bet against. Finally, the March regional Fed reports don’t tell us anything about manufacturing yet.