Is This An L Shaped Recovery? 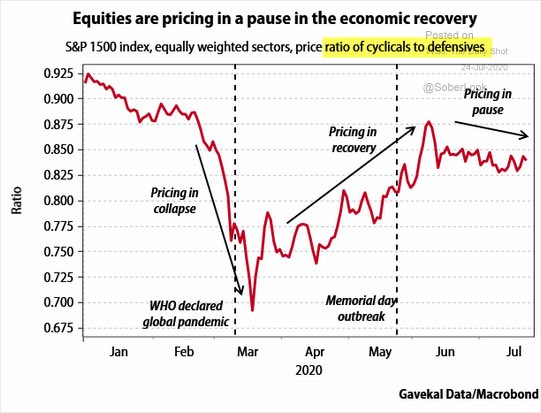 We aren’t saying the economy is in a depression, but many labor market data points look bad. The July BLS report will shock the people who see a V shaped recovery. It will surprise those who only started to realize the economy is weakening when adjusted initial claims increased. The weak report will be reiterated by the retail sales reading which should be weak as Chase card spending growth hit a 5 week low on July 20th and consumer confidence has been waning.

The chart above shows the number of job postings per people searching for jobs has fallen 50% since the recession started. More importantly, there has been no increase since May. This looks like when a PMI reading falls way below 50 (current economic activity worse than the prior month) and then rises back near 50. Fifty means no improvement. If the economy didn’t improve from the bottom, it’s an L-shaped recovery. The flash July composite PMI rose from 47.9 to 50 which was a 6 month high. Manufacturing had a 51.3 PMI and services had a 49.6 PMI. Just getting back to 50 doesn’t mean the economy has fully recovered (for services, it’s getting worse at a lower rate).

The theory is manufacturing is more linked to the global economy which might be doing better than America because America is reeling from COVID-19 more than most countries. Manufacturing might be considered more essential. It also might be more used to big declines and rebounds because it’s more cyclical. Either way, services employs much more workers, so if that sector underperforms, the labor market will be hurt.

We will be discussing the number of job losses that switched from temporary to permanent when the July labor report comes out on Friday July 7th. As for now, we have the number of permanent business closures versus temporary closures from Yelp. It’s a lot easier to get a new job than it is to open a new business. People aren’t exactly eager to open up a business in a pandemic.

According to Yelp, as of mid-July, 55% of the 132,500 business closures since March 1st are permanent. This increase pushed the total above the number of temporary closures. To be clear, the number of total business closed has been falling. This is a race against time as the economy needs to recover quick enough for most of the temporary job losses and business shutdowns to come back rather than be permanent.

In the end, all the pandemic related job losses and business closers will be permanent because either they come back or cease to exist. The problem here is the rate at which they are dying. We expect a large percentage of jobs lost to transition to permanent in the July BLS report. It’s no surprise that the 2 industries with the most permanent business closures on Yelp were restaurants and shopping & retail. The top 3 states with the most permanent closures per 1,000 businesses were Nevada, Hawaii, and California. California is the biggest economy in the country; if it falls, it takes the rest of the country with it.

The Market Sees This Too

If you just look at the S&P 500, it looks like the market is ignoring this weakness. It isn’t ignoring it. The businesses that outperform in this pandemic are dragging the indexes higher. It’s a perfect scenario for the S&P 500 as the biggest companies just so happen to do better than most in a pandemic. If COVID-19 had happened in the 2000s, the S&P 500 would be weaker. As you can see from the chart below, the ratio of cyclicals to defensives stopped going up in late May as the market saw a cyclical slowdown coming.

Originally, when we saw the slowdown before most did in mid to late June, we expected a stock market decline. When it didn’t happen and the slowdown became common knowledge, we knew something was afoot. It then became clear the sector rotation was the market’s idea of pricing this in. You can argue that the big internet names will be hurt by COVID-19; they just will be hurt less. If that’s the case, we should see an outright decline in the index. The other way to get a decline, ironically would be to have a cyclical recovery (we explain why here).

Specifically, in the bottom 20% of economic performances from 1926 to 2019, the top 20% of stocks in terms of valuation (21.67X) had a 1 year performance of 1.01%. We have seen stocks with zero earnings rally that much in few minutes this year. On the other hand, this table shows the stocks in the bottom quintile of valuations (10.49X) gain 40.61%. Instead, this year the value stocks have extended years of underperformance. That’s partially because the value stocks of today are mostly cyclicals.

The labor market is in trouble and the number of businesses that are permanently shutting down is increasing. California is underperforming. That’s the worst state to be in trouble because it’s the biggest economy. The stock market sees what is now obvious. It has decided not to sell off all stocks, especially not the big internet names (until recently). Instead it has gone with sector rotation. Usually, in slowdowns and recessions, the most expensive stocks underperform, but this time value stocks are underperforming (until recently). The concept of there being safety in value hasn’t worked out yet.