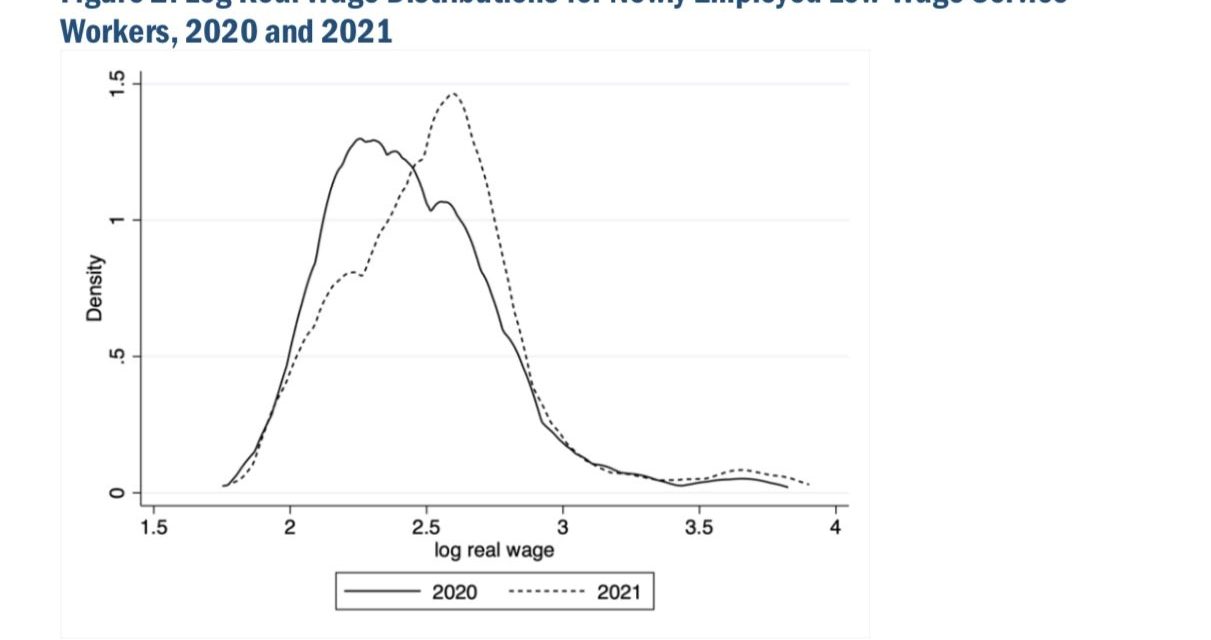 As you can see from the chart below, small business sentiment was almost unchanged as it fell 0.2 to 99.6 in May. Considering that a Democrat is in office, this is a great reading. It’s close to the peak during Obama’s 8 year presidency. While, the headline reading was unchanged, some underlying components had large changes. There was a 6% increase in plans to increase employment (net 27%). That’s a little different from the mildly disappointing BLS report. There was a 4% increase in current job openings (to 48%). That’s in line with the record openings in the April JOLTS report.

The earnings trend reading fell 4 points to -11%. This makes sense because costs are rapidly increasing. Finally, there was an 11 point drop in those expecting the economy to improve to -26%. Nothing major changed in the economy since April. There is no reason for such a large drop. It looks odd in conjunction with the other decent readings. This figure should probably be heavily discounted.

Low wage service workers are having a surprisingly good year. As you can see from the chart below, the real wage distribution in 2021 has a peak further to the right of the graph compared to the 2020 peak. This wage distribution doesn’t control for characteristics that might be unique to this group of workers which is why the Atlanta Fed also looked at the current population survey. This shows continuing low wage service workers had 3.1% higher than predicted real earnings; newly employed workers made 7.7% more than predicted.

Companies are finding it tough to hire new workers so quickly. Some workers don’t want to go back to these jobs because of increased risk and childcare issues. Since the economy changed so much, some may have entered new fields. Yes, it’s even possible some are trying to become day traders. Stock trading has become mainstream just like in the late 1990s.

Oil And Inflation Should Decouple

As you can see from the chart below, 5 year forward inflation expectations and oil prices have been correlated in the past 13 years. However, that might not continue in the next 6 months. Inflation expectations have been falling in the last few weeks because the market foresees a period where the supply chain normalizes and pent up demand falls.

Lower income spending growth has already fallen following the stimulus. Once the savings rate normalizes, there won’t be additional firepower. The rich will spend more on vacations this summer because they missed last year’s trips. Once that’s over, demand will normalize. Furthermore, commodity supplies will increase in reaction to higher prices.

Just because inflation expectations are falling, doesn’t mean oil prices need to fall in concert. They can decouple. Oil has supply constraints for unique reasons. Firstly, there is a push to move away from fossil fuels even though global oil demand will increase for the next decade. Plus, high decline rates and lack of access to capital will make it tougher for US frackers to get back to peak production.

OPEC is obviously a huge factor as well. The bloc can decide to limit production growth for a few quarters more. With all the excess inventory created by the pandemic gone, prices can rise with demand. Oil didn’t spike nearly as much as some of the hot commodities earlier this year. The commodities related to housing should abate as supply increases and home buyers pull back.

Extremely low interest rates and tight spreads make it an ideal time for leveraged buyouts by private equity. As you can see from the top chart below, the value of private equity purchases is on pace to get above $1 trillion in 2021 which would be a record high. If anything disrupts the current environment, this pace won’t be met. An example could be a 10% correction in stocks where spreads widen and financial conditions worsen. Obviously, those are normal events; the first half of the year has been almost perfect which is why the pace might not hold.

Investors are probably more focused on whether this spike in private equity deals portends a disaster. For that we look at the bottom chart which shows the debt to EBITDA ratio reached almost 7 in 2020 which was above the peak in 2007. The leverage ratio is probably even higher in 2021. Compared to 2007, financial conditions are very easy and rates are lower.

That being said, there is undoubtedly a limit to how high leverage can get. Financial conditions won’t need to tighten much to unravel these deals. The higher the leverage, the larger the systemic risk. Luckily, investors don’t need to participate. You don’t need to invest in companies that use leverage to juice returns.

Big investors buying a small portion of houses has become a hot topic on social media because it potentially pits the “rich” versus the “working class.” Nothing generates more views than a good controversy. However, keep in mind that the homeownership rate in Q4 was the highest since 1965 outside of the 2000s housing bubble. It doesn’t generate headlines to say that the housing market is healthy outside of supply constraints. It’s good to see the homeownership rate recovering from the abyss in 2015. Small investments in thousands of homes aren’t going to price out buyers. These investments might not generate returns to beat stocks though.

Small businesses are very confident. They got much more negative on the economy for an unknown reason which probably doesn’t matter. Low wage workers are getting real raises in the service sector. Inflation can fall while oil prices rise. Private equity is increasing its leverage rate. It’s not an enviable to be leveraged at 7 times EBITDA. It’s more prudent to search for investments with less leverage. If anything goes wrong, your investment can blow up with that much leverage. The housing market is healthy other than supply issues which should be gone within 6-12 months. The homeownership rate is high and prices are strong without unqualified buyers getting involved. Small housing investments from “rich people” is a non-issue.