This Is The Inflation Peak For Now 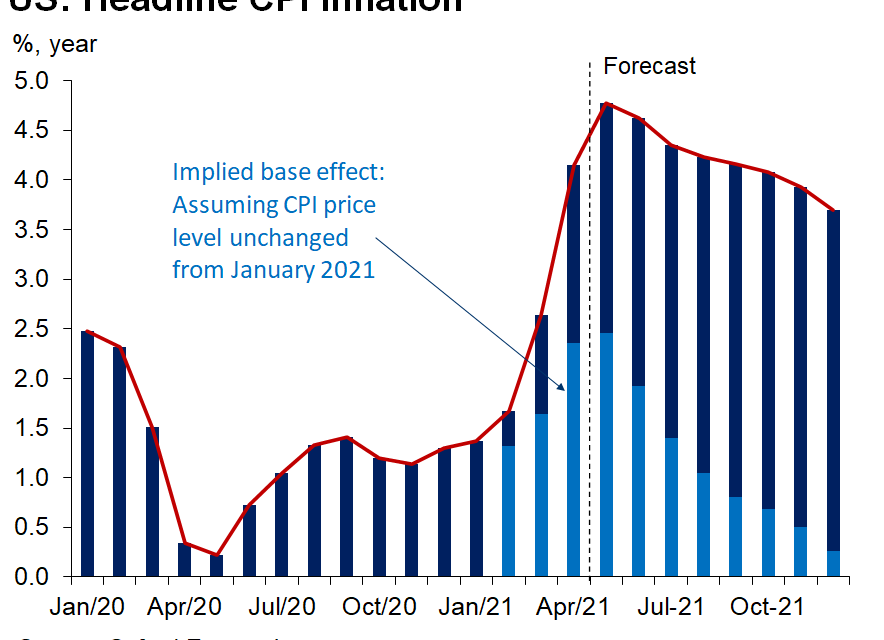 Last week, we predicted that continued claims would fall sharply in the next report. We were correct. In the week of May 29th, continuing claims fell from 3.757 million to 3.499 million which is a new cycle low. In the week of May 22nd, total people on all benefits programs fell 95,000 to 15.35 million. This total is going to fall dramatically this summer. There are 6.35 million people on PUA, 5.23 million on PUEC, and 197,000 people on extended benefits programs.

As you can see from the chart above, the first swath of pandemic benefits will be expiring in the next report. It will increase to 2.96 million by July 10th. Of course, it’s possible some people leave benefits a week or two before they end because they anticipate the change.

The chart below shows 23.4% of benefits will expire in June. Then 5.9% will expire in July. There will be a weird window of a few weeks where some of the country has extra benefits and other parts don’t. The hope is that doesn’t make much of a difference because the labor market will be significantly stronger by August.

It will be interesting to see how many people actually get jobs right away after they get booted off benefits programs considering the record high number of job openings and the elimination of virtually all COVID-19 restrictions. The leisure and hospitality industry is desperate for more workers and actually fills a high percentage of its openings. Most of the people who are still unemployed likely worked in the industries most impacted by the pandemic. In theory, now should be a great time to get back to work given the end of the pandemic.

CPI Spikes: This Is The Peak

CPI spiked in May, but no one cared. This is what we expected. Markets don’t react to unsustainable temporary results. The market had known for a few months this would be the peak in CPI. The market is screaming that inflation will fall in the 2nd half. Specifically, headline CPI was 5% which rose from 4.2% and beat estimates for 4.6% (highest estimate was 4.9%). We knew it would beat estimates because extreme readings are usually significantly different from the consensus even if everyone knows something big changed. This was the highest CPI reading since September 2008.

As you can see from the chart below, this was the easiest comp of the year. The base effects will fall in the next few months. Oxford Economics sees headline CPI falling by less than the base effect in June which means it believes the 2 year stack will rise. Even with this bullishness on prices, headline inflation is expected to fall towards 3.5% by the end of the year. Energy prices will play a large role in this. Obviously, those are very tough to forecast. $70 WTI will encourage more supply if it is sustained for a few months.

Core CPI was up from 3% to 3.8% which beat estimates for 3.6% and the highest estimate which was 3.6%. This was the highest reading since 1992. However, this was mainly due to used vehicle inflation.

As you can see from the chart below, without use vehicles, core CPI was hardly above pre-pandemic levels. Specifically, used vehicle prices were up 7.3% monthly and 30% yearly. This is the highest used car inflation since the mid-1970s. This accounted for a massive 1.1% of the 3.8% core inflation (without it, core CPI was 2.7%). The semiconductor shortage is hurting new vehicle production and increasing prices. These factors are shifting people to used vehicles. Furthermore, rental companies are buying back their fleets they sold last year at any price they can. Now that tourism is exploding, demand for rental cars is increasing.

Some investors were shocked that the 10 year yield fell on the highest core CPI reading since 1992. It fell from 1.49% to 1.44%. Markets are forward looking. The current 1.47% 10 year yield tells us investors believe inflation will fall. To be clear, this doesn’t mean the 10 year yield is headed below 1%. However, it does mean commodity supplies will increase and supply chain issues will go away. As you can see from the chart below, the gap between ordering a chip and receiving it has increased to 17 weeks. This will fall in the next few months due to added supply. If crypto stays low, demand from that area will fall which will also help the situation.

Jobless claims fell for the 6th straight week. Pandemic benefits programs are going to start to expire in the next report. Hopefully people go straight to working. CPI was very hot in May, but it will fall throughout the rest of the year due to base effects, increases in commodity supplies, a decline in pent up demand, and supply chain issues going away. Core CPI is easier to see falling because used car inflation will most definitely fall. Energy is tougher to predict. It could have a big impact on headline inflation in the 2nd half (could keep it high).