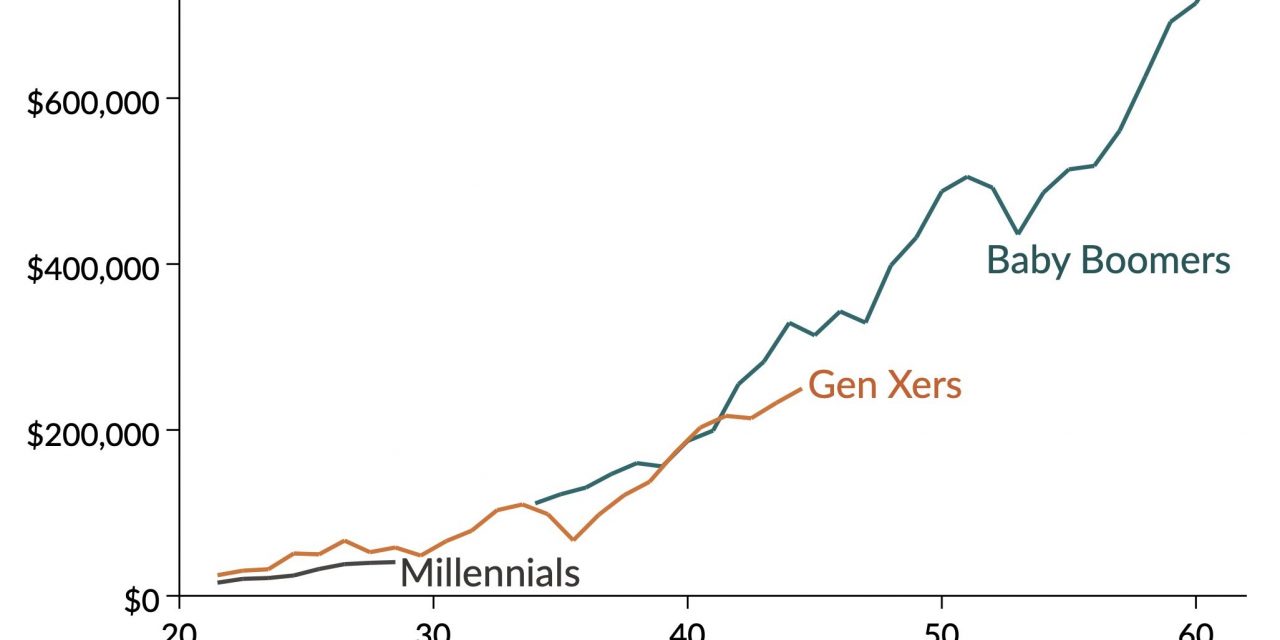 Millennials have less wealth than previous generations did at the same age and now they are getting hit with the deepest decline in economic growth and the biggest spike in unemployment since the Great Depression. As you can see from the chart below, net household wealth per generation member 21 years or older in 2019 dollars was the lowest for millennials. Millennials had 30% less wealth than generation X did at the same age.

We don’t have data on this recession’s impact on millennials, but we do know the last recession left a permanent mark on career earnings. Young people’s net worth comes from their human capital or potential earnings. Obviously, not being able to work or getting paid less puts a dent in that.

Recessions hurt the lower class the most. If more millennials are in the lower class, then it will hurt them more. It’s very important for the small business loans and unemployment insurance payments to reach people on time or this recession will deliver huge damage to those who can handle it the least. Baby Boomers with wealth in assets like the stock market weren’t hit as hard now that we see the stock market recovering. The S&P 500 is at about where it was 12 months ago. That’s not much of a hit to performance (counterpoint: $65 billion in dividends have been canceled this year). Millennials are struggling partially because the great financial crisis occurred right after they became adults. This current recession will be the 2nd time they are dealt with the worst recession since the Great Depression. It’s likely that the next generation that’s coming of age now will be hurt by this recession the way millennials were hurt by the great financial crisis.

The COVID-19 situation is very uncertain in America. The number of new cases in New York peaked on April 10th, but the situation isn’t as great on a rate of change basis in the other states. Some businesses and states don’t want to reopen until the coast is clear because they don’t want to be forced to shut down again. It’s a major hassle to rehire people only to fire them again. Others are willing to try to see what will happen if they reopen. The chart below estimates when each state will reopen. Alaska is already fully open because it isn’t heavily populated. New York will get to 25% by May 15th and 100% by the end of June.

Either the number of cases increases where states are reopening or it doesn’t. Those who want to reopen believe they can avoid risk by social distancing and wearing masks. On the other hand, many businesses might not survive with such diminished service. Some consumers won’t want to come out and businesses will be forced to run at lower capacity anyway (because of safety regulations).

Real Q1 GDP growth was -4.8%. That’s with this shutdown only impacting about 1 month of the quarter. In March, GDP growth fell at an annualized rate of 48%. Oxford Economics estimates Q2 GDP growth will be -36.5%. Q1 consumption growth was -7.6%. As you can see from the chart below, consumption hurt GDP growth by 5.26 points.

Heading into this recession, we thought the economy could be more recession resistant because more jobs are in healthcare which isn’t cyclical. However, healthcare caused the most damage to Q1 GDP ironically because most elective surgeries were canceled. Healthcare hurt GDP growth by 2.25 points. Clearly, our assumption of the secular nature of the sector didn’t account for a pandemic.

Business investment was down 8.6%, while residential investment was up 21%. Remember, the warm winter helped the housing market earlier in the year. Residential investment’s 0.74% contribution to GDP growth was the best since Q3 2003 which is near the peak in the housing bubble. Inventory investment hurt growth by 0.53%. Net trade helped growth by 1.3% because imports cratered (not a good thing). Exports fell 8.7% and imports rose 15.3%. Global trade is cratering which means even countries like Sweden, which didn’t shutdown, and South Korea, which successfully dealt with COVID-19, are seeing their economies hit hard. Government spending was up 0.7% and helped growth by 0.13%. It will help growth much more in Q2 with all the stimulus spending.

The all-important final private domestic demand reading showed growth fell from 1.15% in Q4 2018 to -5.69% in Q1 2020. The fact that this reading fell worse than overall GDP growth reinforces our thesis that it better reflects the trends in the overall economy than headline growth. The economy is obviously in a recession. If you’re curious, the chart below shows how long it has taken after recessions have ended for NBER to call a trough. It also shows peaks which are the last month of expansions. We think NBER will have a quicker declaration this time since it’s so obvious the last month of the expansion was February.

Millennials are getting hit with another recession even as they already have 30% less wealth than generation X did at the same age. The next generation that’s entering the workforce will be hurt like millennials were during the great financial crisis. States are handling reopening the economy differently. We will be watching the early states to see how quickly their economies rebound and if the number of new COVID-19 cases increases. The Q1 GDP report was terrible. The previously recession resistant healthcare sector is being hit the hardest because elective surgeries are being put off. The U.S. economy is in a recession. NBER should be quick to identify the economic peak as February because COVID-19 was the clear recession catalyst.