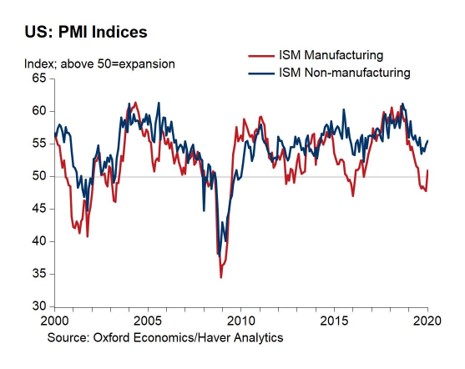 The non-manufacturing PMI was consistent with 2.4% GDP growth just as the manufacturing PMI was. 12 of 16 industries in the non-manufacturing report had positive business activity growth. The business activity index increased 3.9 points to 60.9. The new orders index rose 0.9 to 56.2. However, the employment index fell from 54.8 to 53.1. The ADP report which we will review next, showed the exact opposite results. It lessened investors’ concerns about the labor market. The consensus for the January BLS report still expects job creation of 158,000.

The inventories index fell 4.5 points to 46.5 similar to the manufacturing PMI. With the recent drawdown in inventories in Q4 (GDP report) and January (ISM reports), inventory investment could increase in the next couple of months. That would reverse the -1.1% impact on GDP that occurred last quarter. The prices index fell 3.8 to 55.5 which is consistent with the recent decline in wage growth and the decline in commodities prices this year.

The export index fell 0.9 to 50.1 and the import index rose 7.1 to 55.1. Net trade might also reverse its impact on GDP as it helped Q4 growth by 1.5%. The December international trade report just showed the trade deficit rose from $43.7 billion to $48.9 billion. There was one mention of the tariffs in the comment section of the ISM report. For the first time, a firm mentioned the Chinese coronavirus. A healthcare and social assistance firm stated, “Closely monitoring China’s coronavirus and its potential impact on medical supplies like surgical masks and protective goggles.” Many American firms have temporarily shuttered their business in China. However, recent rise in Chinese equities suggests the worst is over.

The January ADP private sector jobs report was fantastic, but it’s not always consistent with the BLS reading. In fact, when it’s this great, it’s usually too optimistic. Specifically, December job creation was revised down 3,000 jobs to 199,000. Job creation was 291,000 in January which beat estimates for 154,000 and the highest estimate of 190,000. As the chart below shows, this was the 5th biggest estimate beat in the 13 years this report has existed and the biggest beat in 8 years.

As we mentioned, great ADP reports are usually too optimistic. The ADP report has shown more than 250,000 jobs were created 9 times this expansion. Eight of those times it was above the subsequent BLS report. It overestimated the BLS report by an average of 86,000. This was the highest first estimate of job creation by ADP since February 2017; that reading was 71,000 above the BLS report. This was the 3rd highest first estimate in history. If this is the final reading, it would show the most private sector jobs created since May 2015. Following the cycle low in yearly job growth, growth increased from 1.52% to 1.54%.

Construction And Leisure & Hospitality Did Great

Within this report, small sized firms created 94,000 jobs, midsized firms added 128,000 jobs, and large firms created 69,000 jobs. Small firms created the most jobs since July 2018. Other small firms (with 20-49 employees) created 68,000 jobs which was the most since January 2014. Goods producing firms added 54,000 jobs. The manufacturing sector added 10,000 jobs despite the weakness in the ISM employment index (up 1.4 to 46.6 which is contraction). Construction added 47,000 jobs which is probably related to residential housing. That was construction’s highest job creation since January 2019.

Services added 237,000 jobs. That was the most since February 2016. This sector’s job creation was boosted by leisure and hospitality which added 96,000 jobs. As you can see from the chart below, that’s more than 2.5 standard deviations above its post-recession average.

When this industry does well, it’s bad for wage growth because it is the lowest paying one ($16.77 per hour). Education and healthcare added 70,000 jobs. Finally, professional and business added 49,000 jobs which was the highest since April. This industry pays workers a hefty $34.22 which is above the average of $28.32.

We are paying such close attention to the Democratic primary because it’s possible there will be a fundamental shift in policy in 2021. There could be a massive tax hike and an even bigger increase in spending. Bernie Sanders is now the frontrunner in the Democratic primary as Iowa was a virtual tie (with Buttigieg) and he’s up by an average of 7.8% in New Hampshire. He has a war chest of money because he’s raising it from small donors who haven’t given close to the limit. The latest odds show he has a 48% chance of winning the primary. This gives him a 31% chance of being President.

The chart below shows the massive implications of this as Bernie plans to add almost $30 trillion in new taxes in the next 10 years and add over $60 trillion in new spending. Bernie is going after the wealthy, the banks, the energy companies, and health insurance companies. His election would probably be a big negative for stocks.

The ISM non-manufacturing PMI increased which further supports the narrative that economic growth in 2020 will increase from 2019. The ADP report was fantastic. The bad news is the BLS report will probably show lower job creation. The good news is it will still likely be a good report. Bernie Sanders is proposing wildly different economic policies than currently exist. The fact that he has a 31% chance of being President has big implications for stocks.