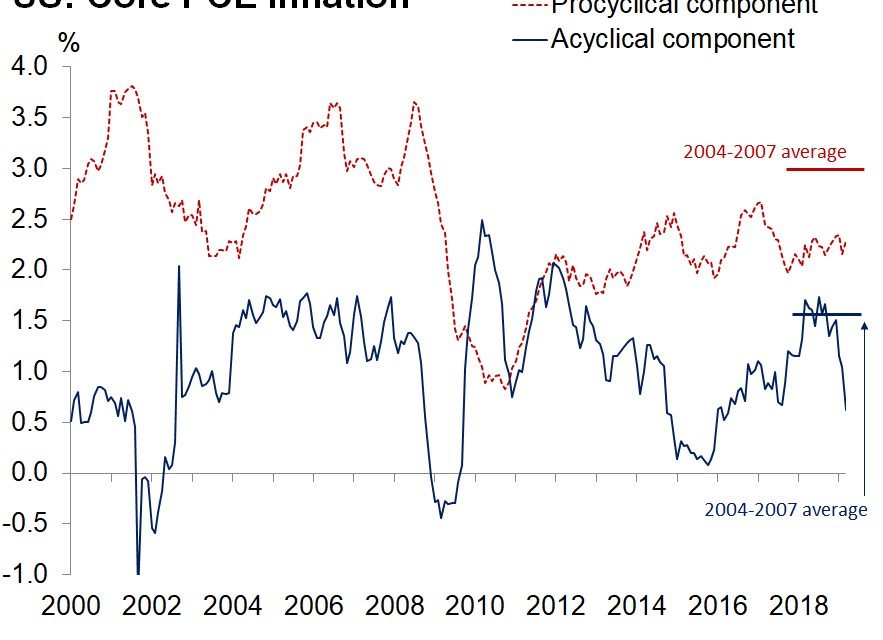 The big takeaway from the May Fed Minutes which were released on May 22nd is that the Fed won’t be cutting rates in the near term. There is very little chance the Fed cuts at its June meeting and it’s not forecasting a cut for the rest of the year. The June meeting is one of the meetings where the Fed provides specific guidance on rates and economic reports like the unemployment rate and GDP growth. If the Fed guides for no cuts again, that will be at odds with the market’s expectations. As you can see from the table below, the market sees a 77.2% chance of at least one cut by the end of the year.

The Fed funds futures market didn’t react much to the Minutes probably because it’s similar to what the President of the Atlanta Fed stated earlier in the week. His interview lowered the chances of a cut in June. He doesn’t see any cuts by September. The timing of his statement is important because the Fed Minutes are from May 1st to the 2nd which is before the latest round of tariffs. Since the trade war escalation didn’t affect his opinion on rates, it’s fair to assume the Fed could have a similar view of the economy now as it did 3 weeks ago. You can tell the Fed wasn’t expecting this latest round of tariffs because it mentioned trade negotiations as one of the risks that had moderated.

Specifically, in the Minutes, the Fed stated, “Members observed that a patient approach to determining future adjustments to the target range for the federal funds rate would likely remain appropriate for some time, especially in an environment of moderate economic growth and muted inflation pressures, even if global economic and financial conditions continued to improve.” The keyword from the Minutes was “patience.”

That quote means the Fed is going to let the economy keep going without changing rates or guidance. Obviously, the Fed won’t make the same mistake as Powell did last year when he said policy is on autopilot. However, it basically has been in that mode since it went dovish late last year. There isn’t much to do when inflation is low, the unemployment rate is low, and the economy isn’t showing signs of falling into a recession. One of the most obvious ways to avoid a recession in the intermediate term would be to make a trade deal with China and the Fed doesn’t control that.

Another key quote from this meeting is when the Minutes stated, the “staff’s assessment that the level to which inflation would tend to move in the absence of resource slack or supply shocks was a bit lower in the medium term than previously assumed. Core inflation expected to run just below 2%.”

The Fed is finally owning up to the fact that inflation is below its target by saying it is “muted” and that it “was a bit lower than previously assumed.” The first step to change is owning up to a problem. However, we don’t think the Fed will react to inflation being below its target because it hasn’t done so in this expansion. As you can see from the chart below, procyclical core inflation has been below the 2004-2007 average this entire cycle. The recent drop in acylical core inflation certainly hasn’t helped core PCE reach 2%.

As you can see from the chart below, the stimulative effect of fiscal policy is diminishing. It’s possible that if Congress doesn’t act, budget cuts will hurt real GDP growth by 0.3% in 2020.

The good news is the GOP and the Dems are working together to get a deal done which raises the debt ceiling and gets rid of the automatic budget cuts. The debt ceiling was surpassed in early March; extraordinary measures have been underway to fund the government. Essentially, the government is trying to solve problems it has artificially created. Nothing would happen if there wasn’t a debt ceiling. Also, budget caps are automatic cuts put in place in the Budget Control Act in 2011 because Congress couldn’t come up with spending cuts.

Usually, it’s tough to rely on Congress to get anything major done, but if there’s one thing we can count on the government to do it’s figuring out how to spend more money. That’s why the stock market hasn’t reacted to the debt ceiling issues. That being said, it’s still good to understand the risk which is why we included the chart from Oxford Economics.

Some believe Trump is losing his leverage in the trade negotiations with China because we are getting close to the 2020 election. Others say he has gained strength because of the impending trade deal with Mexico and Canada. The chart below aims to measure Trump’s leverage. It looks at America’s PMI versus China’s PMI, the S&P 500, the S&P 500 versus the Shanghai Composite, and Trump’s approval rating. High leverage might not be a good thing for stocks because it could mean he’s confident enough to announce more tariffs.

The housing market will play a big role in whether GDP growth can get above 2% in Q2. The MBA applications index doesn’t look as great in May as it did in April. The wet weather could be playing a role in weakening demand temporarily. Specifically, in the week of May 17th, the purchase applications index fell 2% weekly on top of a 1% decline. However, yearly growth was still 7%.

For most of the year, the Fed has been going against the market as it hasn’t called for any rate cuts while the market has expected them. So far, there hasn’t been any trouble as the market still expects rate cuts even though the Fed hasn’t delivered yet and likely won’t deliver at the June meeting. Eventually, this will be an issue. There will be a problem if the Fed doesn’t cut rates this year and the economy stays weak. The good news is Congress is working on a deal to avoid automatic budget cuts and raise the debt ceiling. Lately, Trump’s leverage in the trade deal negotiations with China has increased. That might mean more tariffs if China doesn’t give in.